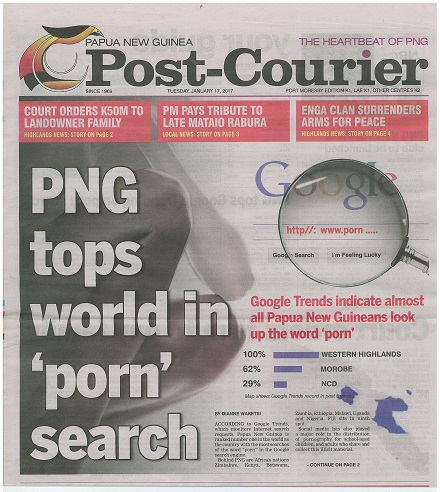 The source of the media reports is Google Trends. This is an interactive website run by Google, probably the world’s most popular Internet search engine, which presents information about the searches that are conducted through Google. For instance, a user can type in the word ‘car’ and see information about how popular the search term is over time and also where it is popular, comparing regions, countries and cities.

At first glance, the site appears to suggest that 100% of all searches conducted using Google in the United Kingdom feature the word ‘car’. But this is not possible. There’s no way that all of the people in Wales, Scotland and other parts of the United Kingdom only ever use Google when they want to find out information about different kinds of motor vehicles. Instead, the way it works is that the figures represent rankings, not percentages. The Post-Courier’s story was misleading in that it included percentage symbols alongside bar graphs. As Google Trends explains, “100 is the location with the most popularity as a fraction of total searches in that location”. In other words, the United Kingdom had more searches during the time period for the word ‘car’ compared to other countries, as a percentage of the total number of searches, which would also have included many other words, including ‘weather’, ‘news’, ‘school’, ‘restaurant’, ‘bank’ and more.

Another example is the term ‘Highlands’. When inserted into Google Trends, bar graphs appear showing 75 for PNG. Again, this does not mean that 75% of the Google searches conducted by people in PNG are for this word. Instead, it means that compared to other countries – where, for example, the term ‘mountains’ might be more commonly used – the term ‘Highlands’ is searched for fairly frequently in PNG. 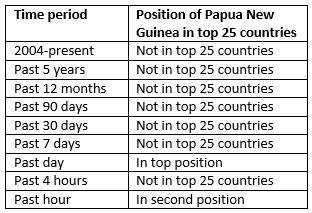 It’s important to note that the Post-Courier’s findings were not easy to duplicate and that in fact PNG does not feature in the top 25 listing for most time periods. Google Trends results are constantly being updated in real time and therefore it is very difficult to check or verify the Post-Courier’s story. In addition, the tool only presents the top 25 countries – therefore it is not possible to determine a country’s actual ranking if it does not appear in the top 25.

It’s also helpful to point out that the size of a country’s population does not impact upon the ranking, as the ranking refers to the frequency of use of a word, for instance ‘porn’, as compared to all other words inserted into Google in that place, including ‘school’, ‘highway’, ‘buai’, ‘election’, ‘Highlands’, ‘Australia’, etc. In other words, the word ‘Highlands’ is used in PNG more often as a percentage of all searches, compared to the word ‘mountains’. It’s also worth noting that some users may have blocked their location, meaning that Google cannot tell where they are based, and this would of course make any data regarding locations of searches somewhat inaccurate.

Western Highlanders might also be curious to know how their province rates. While the Post-Courier showed a graph suggesting that the Western Highlands is the province with the most searches for the term ‘porn’ versus other words used, compared to other provinces of PNG, the results are inconsistent. As is shown in Table 2, Western Highlands Province (WHP) moves around the rankings a great deal, depending on the time period in question. For instance, in the past 7 days, WHP didn’t feature at all in the top ten provinces, whereas it’s in the top position when looking at the last 5 years. When focusing on other provinces, their positions also move around a great deal. In short, the author feels that the rankings vary so much when comparing provinces in PNG as to be meaningless. 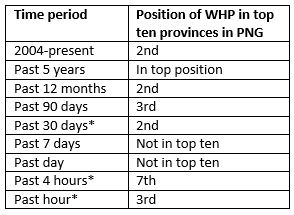 In the last couple of years there has been a significant improvement in the accessibility of the Internet in PNG, due to mobile network upgrades and expansions, as well as availability of cheap smartphone handsets. While most people in PNG still do not have access to electricity, many do now live within mobile network coverage. The majority of this coverage is second generation (2G) which is suitable only for voice calls and text messaging. But around urban centres, both Digicel and bmobile Vodafone now offer third generation (3G) service, which can be used to surf the Internet, correspond through email and use social media platforms such as Facebook and WhatsApp. In Port Moresby and Lae, Digicel offers 4G service. Telikom PNG is in the process of launching a new, digital mobile phone service which will aim to compete with the other players. All these changes have meant that a growing number of people in PNG are accessing the Internet for the first time. In particular, the number of Facebook users based in PNG continues to rise. Interest in and use of Facebook is fuelled by mobile phone companies offering special promotions through which Facebook use is either free or very cheap. Nonetheless, many people in PNG still use basic handsets and rarely access the Internet, if ever.

Amanda H A Watson is a Lecturer in Public Policy at UPNG, based in Port Moresby under the UPNG-ANU partnership. She is also a Visiting Fellow with the State, Society and Governance in Melanesia Program at ANU.