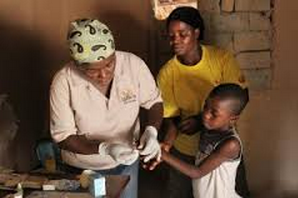 Doing well by doing good: foreign aid improves opinions of the US

A fundamental question, therefore, is whether helping the poor in recipient countries and bringing benefits to donor countries are ever compatible. In our new paper just published in Quarterly Journal of Political Science, we argue that they are indeed compatible when the benefit sought is enhanced international standing of the donor country, at least for certain types of aid programs.

Using a multinational survey and an econometric tool (specifically, multiple regression using instrumental variables), we show that a United States aid program specifically targeted to address the problems of HIV and AIDS – the President’s Emergency Plan for AIDS Relief (PEPFAR) – has improved perceptions of the US among mass publics in recipient countries. HIV and AIDS are still major problems in much of the developing world. Among a variety of initiatives aimed to combat them, PEPFAR stands out in its scale (15% of all US development aid in some years) and in its significantly positive health impacts. It was established under the Bush Administration in 2003, and has been provided to more than 80 developing countries, in particular, in sub-Saharan Africa. It has continued to receive support under the Obama administration, although in a modified form integrated into a broader plan for improving global health outcomes. Importantly, PEPFAR is well publicised and thus visible among publics. The US government carefully and deliberately branded PEPFAR-funded work to “ensure appropriate recognition for US programs and contributions to this effort” (PEPFAR’s Branding Guidance, Updated 2012).

Considering these important aspects of PEPFAR, our theory is that in addition to its potential humanitarian benefits, a foreign aid program that is targeted, sustained, (perceived to be) effective and visible can serve an important strategic goal for those countries that give it: fostering positive perceptions among foreign publics.

The estimated impacts are substantial. The figure below (not in our paper) is based on the estimates of our regression model with instrumental variables (Table 1, 2007-2010 average). To interpret the main findings in an intuitive and direct manner, we focus on selected African countries that received comparatively large amounts of PEPFAR, and simulate the percentage of each country’s population who approve of the performance of US leadership under a counterfactual scenario (code to make this figure and replication data are available from the authors). Specifically, the arrows in the figure show how much less popular the US would have been in these countries if it had not provided PEPFAR. The magnitude of the impact is not trivial.

So what? We argue that these results indicate an important possible virtuous circle or race-to-the-top dynamic for the emerging global order. As great powers, especially the US and China, are increasingly constrained by the costs that militarised conflicts would impose on their trade and investment interests, they may increasingly seek to pursue their international interests through currying favor among foreign elites and publics. Foreign aid is an obvious potential tool for this. If targeted, sustained, effective and visible aid gives the best chance of influence, this may compel great powers to actually do good, and to be seen to be doing so, in order to do well in their global competition for influence.

But is enhanced international standing valuable enough for great powers to pursue vigorously?  Much of the buzz about “soft power” and China’s standing in Africa and Latin American would seem to indicate that it is. In a companion paper published in World Politics in 2012, we (Goldsmith and Horiuchi) also show that positive foreign public opinion can have tangible foreign policy benefits when the US seeks cooperation on an issue important to publics abroad. More generally, with the expansion of democratic governance globally, it seems intuitive that public opinion will matter more in international relations.

This article was originally published in The Monkey Cage (The Washington Post) on April 14.