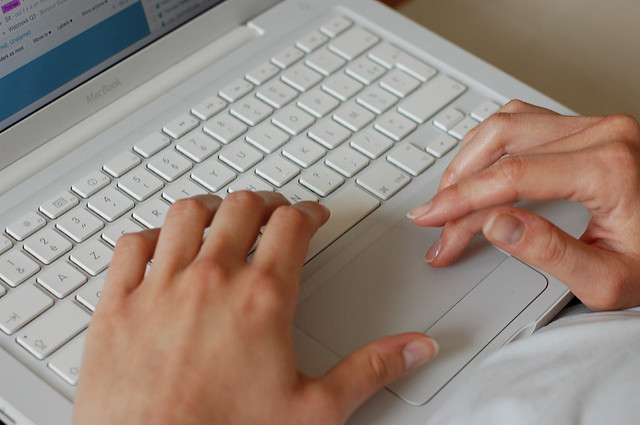 Donations, action, or awareness: what do Australian NGOs use the internet for?

Since aid NGOs first set up basic webpages in the late 1990s, the internet has become increasingly important for them as they project their brands and messages to the world. Given this, it’s surprising how little research there is on how NGOs make use of the internet. Our recent Devpolicy discussion paper is an attempt to fill this gap. The paper reports on our content analysis of the websites and social media feeds of Australian aid and development NGOs. We undertook our analysis to learn the extent to which aid NGOs used their web presence for the following ends: soliciting donations, encouraging people to take action, and raising awareness of development issues.

To work out which NGOs to study we obtained a list of member NGOs from ACFID and added the five largest non-ACFID NGOs (Amnesty International, Catholic Missions, Compassion, Médecins Sans Frontières and Rotary Australia World Community Service). We intended to code the 50 largest Australian aid NGOs (largest by total revenue). However, we had to drop nine of the original 50 NGOs from the list. In most instances this was because the NGOs (and their websites) were primarily devoted to domestic issues. (A full description of the methods we used and the choices we made is in the paper.) We replaced these NGOs with the next nine largest NGOs on our list, keeping the original sample size of 50. Because the NGOs we studied were Australia’s largest aid NGOs we think it reasonable to assume that they are also the NGOs whose websites are viewed most often by the Australian public.

For each of the selected NGOs we analysed their website front page and “get involved” page, and their most recent 20 Facebook and Twitter posts, and categorised each item we studied into one of four purpose-related categories: donate, take action, awareness raising, or other. When categorising we categorised items according to what we thought their ultimate purpose was (what was the NGO really trying to achieve from having the item on their website or social media feed?). We allocated each post on a social media feed or panel on a webpage to one of the four purpose categories, and then calculated the percentage of the media feed or page devoted to each purpose.

This gave us percentages for each NGO for each purpose category for each of the separate media types (website front page, website get involved page, Facebook and Twitter). We also calculated an average across all four media types for each NGO.

The pie chart below shows average NGO internet media use by purpose category (averaged across all media types and all NGOs). As seen in the chart, on average NGOs devote most of their internet media presence to obtaining donations. Awareness raising receives less than half the amount of space devoted to donations, but still receives twice the amount of space that take action receives. 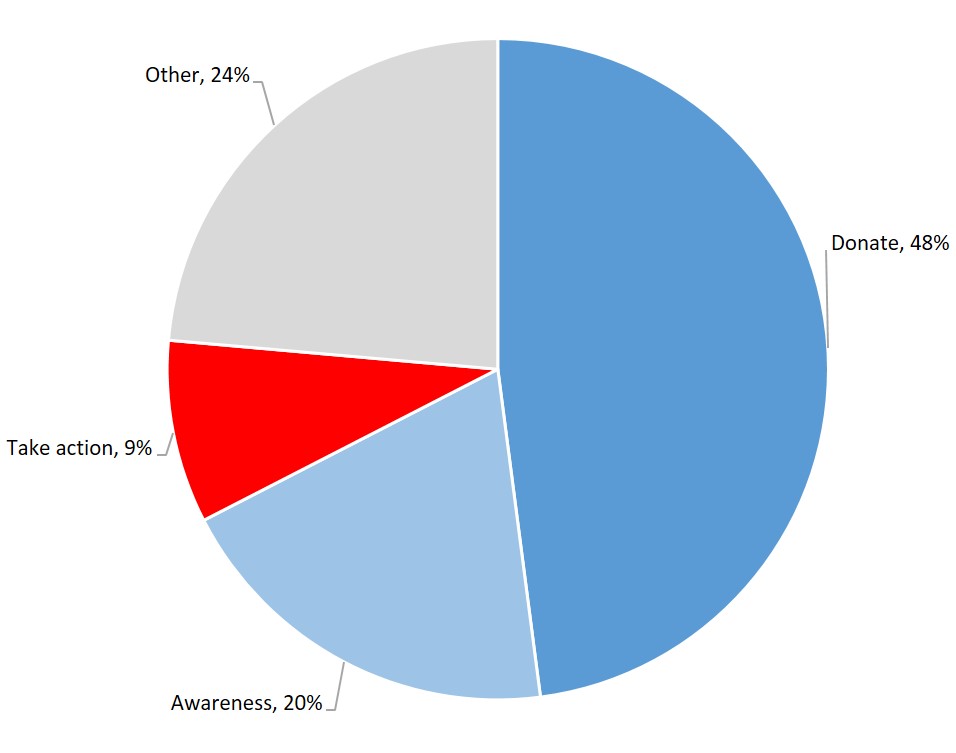 These figures are, of course, averages across all the NGOs studied and all the media types we looked at. And there is some variation both across the different media and between NGOs.

The variation across NGOs can be seen in the boxplots of average NGO internet media use by purpose (Figure 2). Each boxplot represents a different purpose. The y-axis for the boxplots ranges from zero (no space devoted to this purpose at all) to one (100 per cent of space devoted to this purpose). In each boxplot, half of our NGOs fell within the light blue square. Think of this area as the ‘norm’ for Australian NGOs. Then, in the first two boxplots, all of the NGOs fell within the capped blue lines. In the third box plot, the one for take action, all NGOs, except for four outlier NGOs fell between the capped blue lines. The four outliers in the take action boxplot are the labelled blue dots. The capped blue lines and the dots show us the full extent of variation, which is highest for donations and lowest for take action. While there is considerable variation overall, as the shaded boxes show, the ‘norm’ is a lot less broad.

Figure 2: Boxplots of average NGO media use by purpose 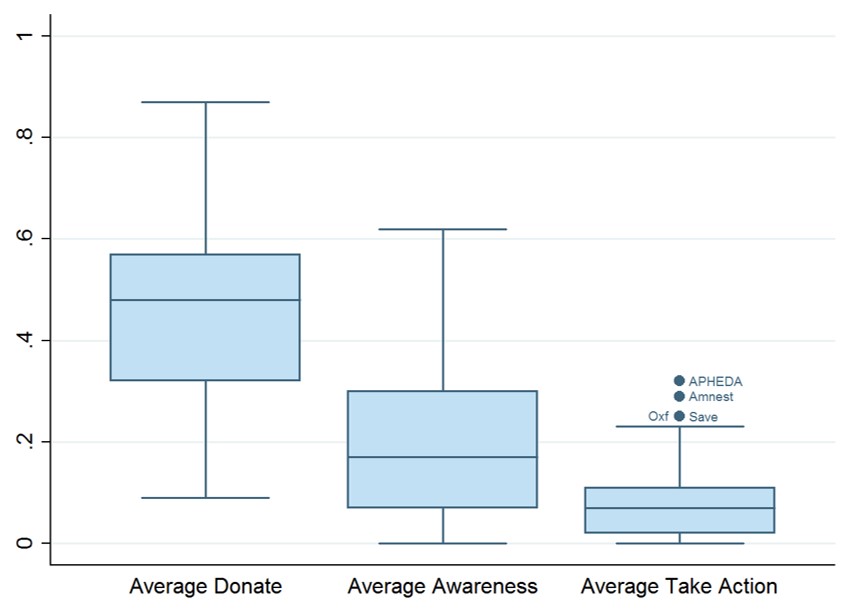 Finally, the bar chart below shows the variation across different types of media, and shows that the bulk of space is devoted donations in the all of the internet media we studied except Twitter, which is devoted mostly to raising awareness. (Awareness raising is also higher on Facebook than on the webpages we looked at, but donations are still more common.) As expected, the amount of space devoted to getting people to take action on development issues is at its highest on NGOs’ get involved pages; however, on average, donations still predominate on NGOs’ get involved pages. Before we started our analysis we had imagined the aim of a get involved page would be encourage people to take action on issues. Instead though, even this page is mostly used to solicit donations. 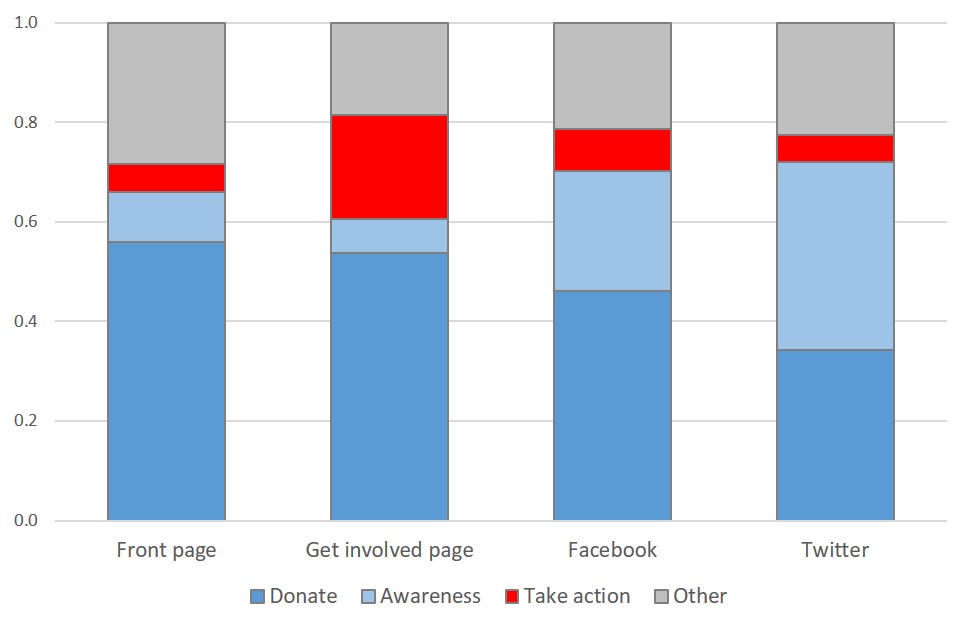 And so, while different internet media are used for somewhat different reasons, and while there is real variation across Australia’s aid NGOs, if you were to ask us for a simple two-word answer to the question “what does the average Australian NGO use the bulk of its internet presence for?” our answer would have to be, “chasing donations”.

Whether you think this is good or not is going to depend on your answer to two further questions: first, “should NGOs focus foremost on getting funding for projects abroad, or should they focus more energy on making people more aware and engaged with global issues here in Australia?” And, second, “what do internet media work best for?” If you think work in the field is what matters, and that the internet is an effective way of raising funds, then you should be happy with what we’ve found. On the other hand, if you think a more aware and engaged public is crucially important for development issues, and if you think NGO websites are important tools for achieving this, you’re likely to think that the current situation is far from ideal. We won’t venture an answer ourselves. Instead, for now we’ll leave you with the questions and the data. In our next blog post, we’ll look at the relationships between other NGO traits and how NGOs make use of the internet.

Sachini Muller is a student at the Australian National University, and interned at the Development Policy Centre in Semester 1, 2016. Her interests lie in research and the aid and development sector, particularly in Asia and the Pacific. Terence Wood is a Research Fellow at the Development Policy Centre. Terence’s research interests include aid policy, the politics of aid, and governance in developing countries.

This post is the first in a two-part series summarising Devpolicy Discussion Paper 47; find the second post here.