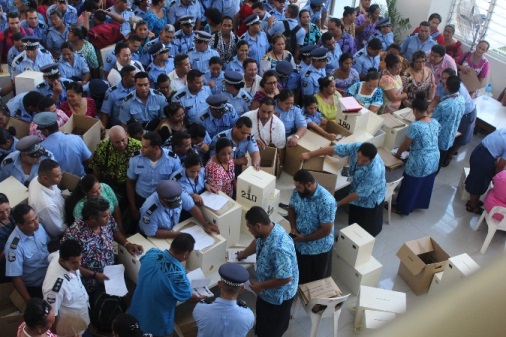 Elections in Samoa: a new database

Since becoming an independent state in 1962, Samoa has held fifteen general elections. With the help of many others, we have now brought the results of all these elections into a single place for the first time. This is the Samoan Election Results Database. You can access it online here.

The database website is an effort to make this data publicly available and share it with other researchers and anyone else interested in the electoral history of Samoa.

On the website, you can use the interactive Data Explorer to browse the election results, or download a booklet of results from the Datasets page.

In our new Discussion Paper ‘Samoan Election Results: trends and patterns 1964-2016’ we have also made use of the data to highlight key features and trends in election outcomes in Samoa.

To launch the website and Discussion Paper, here are some key points you should know about election results in Samoa.

Prior to the 1991 general election, only ‘matai’ (chiefs) were allowed to vote or stand as candidates in Samoan elections. However, a referendum in 1990 saw the electoral franchise expanded to all citizens over the age of 21, although eligibility to stand for election was still restricted to ‘matai’.

As can be seen in Figure 1 below, the change led to a dramatic increase in the number of votes cast (votes nearly quadrupled). Yet, many other aspects of election results remained remarkably stable even as the franchise was transformed. Candidate numbers, for example, did not increase. Winning candidate vote shares fell, but only slightly. And while an unusually high proportion of sitting members won their seats back in 1991, in subsequent elections incumbent turnover rates returned to their long-run averages. 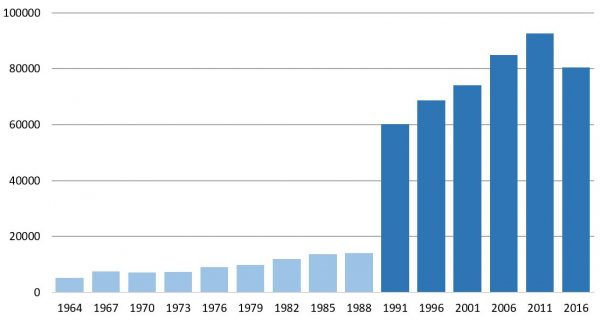 The absence of change wasn’t limited to the 1991 expansion of the franchise either. We found some clear trends over time – for example, more women are standing as candidates, and the number of people who have won their seats unopposed has fallen. However, we were surprised by just how little had changed in some areas, and by the number of other areas where trends of change over time existed, but they were also very weak. Figure 2 provides a good example of this. It plots the mean percentage of votes won by candidates. There was a slight downwards trend until 1982, but average candidate vote shares have remained stable since then. 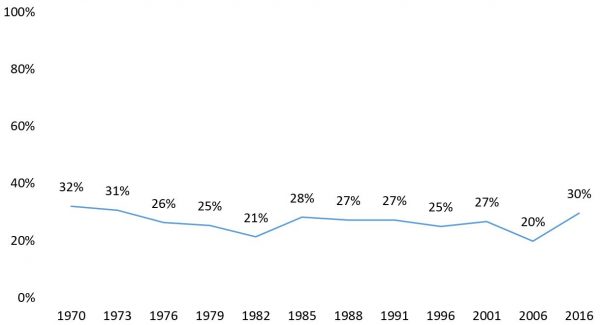 Having previously released the Papua New Guinea Election Results Database, and with a forthcoming Solomon Islands Results Database, we were also able to compare Samoa with two other Pacific comparators. Given the social differences between the ethnically homogenous Samoa and the very diverse Melanesian countries, we were expecting differences. And we found differences aplenty. Although candidate numbers have remained fairly stable in Samoa, in Papua New Guinea (PNG) the number of candidates standing in the average electorate has quadrupled since 1977. And while the mean candidate won 30 per cent of the vote in Samoa in 2016, the mean candidate in the 2012 general elections in PNG won just three per cent of the vote. (2012 is the most recent election we have data for in PNG.)

Another obvious difference between the three countries is to do with political parties. In recent elections in Samoa, party politics have become remarkably consolidated (see Figure 3). In 2016 only two parties stood candidates. What’s more, a number of independents were informally affiliated with parties.

In 2012 in PNG about 42 parties stood candidates, and 21 of these were successful in having candidates elected to parliament. (We say about, as party names are not always accurately recorded in PNG. Also note that some MPs will have joined larger parties once they were elected.)

Even in Solomon Islands, which is smaller than PNG and which has fewer electorates, 12 parties stood candidates in the 2014 elections, and six parties succeeded in having their candidates elected. 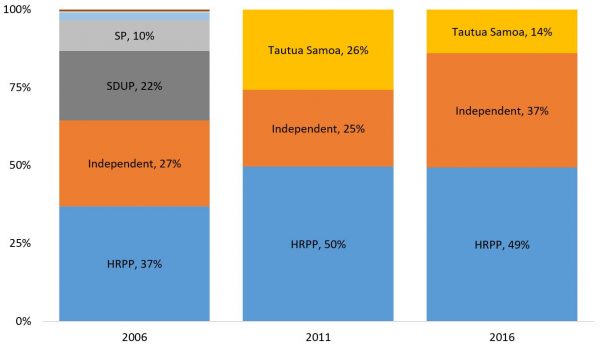 Yet despite the differences there are also similarities between Samoa, Solomon Islands and PNG. It has been very difficult for women to win elections in all three countries. Figure 4 shows the number of women currently elected to Samoa’s Parliament (which currently has 50 seats). Four female MPs compares favourably to none in PNG and one in Solomon Islands, yet it is still a low enough number to suggest that women face considerable electoral challenges in Samoa. 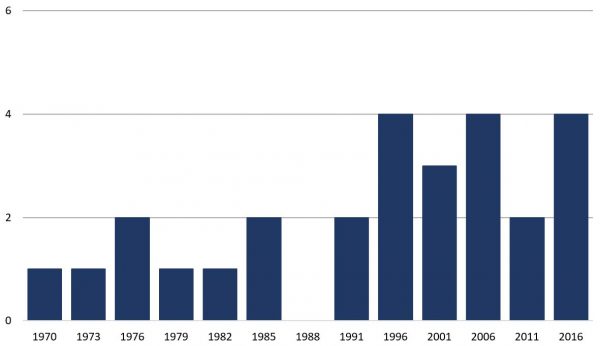 This is a surprise. Parties are stronger in Samoa. Social structures more generally are thought to be stronger. Fewer candidates stand. It’s easy to imagine how these facts might translate into low incumbent turnover. And yet they don’t. Why they don’t is an interesting research question.

Figure 5 – Percentage of contesting incumbents who win their seats back 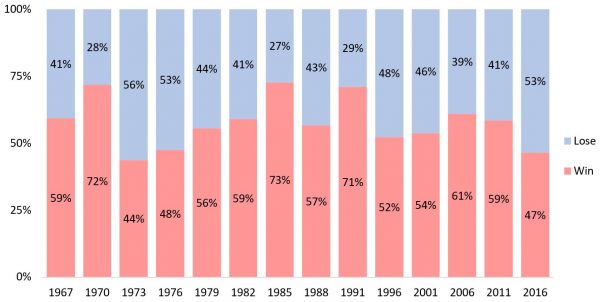 There is much more to be said about elections in Samoa. Indeed, there is already much fascinating academic research on the topic (we list some in the Discussion Paper, and more on the Links page of the website). For now, we are putting the results data into the public domain in the hope that they will be useful to other researchers, and in particular to researchers from Samoa.