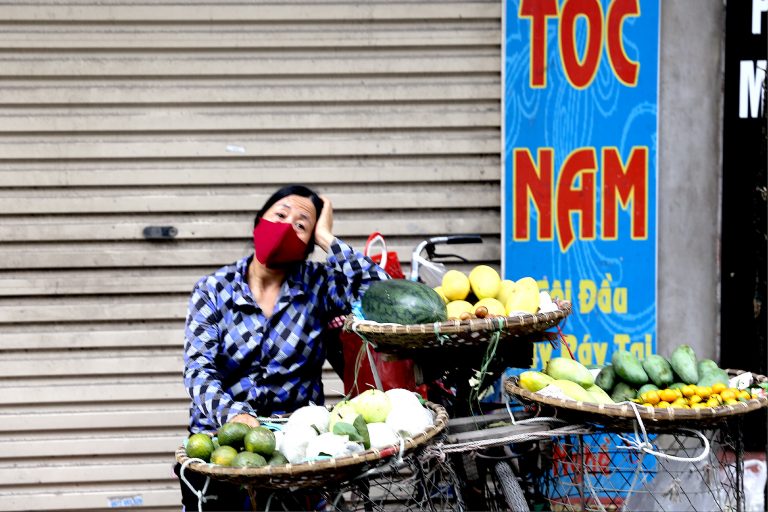 Vietnam’s 53 ethnic minority groups make up around 14% of the population. Recent World Bank statistics suggest that those living largely in remote, mountainous or otherwise disadvantaged areas of the country also make up 73% of Vietnam’s poor. For decades, many have migrated to Hanoi in search of work and other opportunities. There they gravitate, through their networks and contacts, into sectors such as construction, tourism, transportation and services.

In late 2020, we carried out in-depth interviews with a group of ethnic minority workers in Hanoi, to better understand how they were faring during multiple waves of the COVID-19 virus and response measures.

Our interviewees were members of six ethnic minorities – Tay, Nung, H’mong, Muong, Khang and Thai. Mostly women and aged between 18 and 53, they had all migrated from the northern provinces of the country, from three months to six years ago. All interviewees were employed informally as labourers on construction sites, as domestic workers, as porters, or as waiters in small coffee shops. In interviewing them, we were keen to understand the impact of the pandemic on those suffering multiple levels of disadvantage, in this case female ethnic migrants working informally.

COVID-19 arrived in Vietnam in late January 2020. The first nationwide lockdown followed swiftly, and by 1 April people were only allowed to leave their homes to secure essential items. All shops and factories, aside from those providing essential health products and food, were closed. The initial national lockdown was lifted after a fortnight, except in provinces with a high risk of infection, such as Hanoi, where it was extended for a second fortnight.

Months later, speaking to our interviewees in October and November 2020, we were taken aback by the extent to which that four-week period had affected most of them.

In the first instance, the lockdown meant the sudden loss of at least one month’s income for workers across many sectors. For those with no savings, or who regularly remit anything leftover to families at home, this meant going without food, subsisting on the most basic meals of rice and noodles. This was worse for those whose meals were ordinarily provided by their employer. Even as restrictions were lifted, for many research participants the financial impact continued to be felt as they resumed their work with shorter days and fewer income-earning hours. One participant had lost 50% of her pre-pandemic wages.

Beyond income, other forms of capital were affected, most notably participants’ social capital – the reciprocal networks of family and friends on which marginalised populations can rely in a crisis. Those without savings tried to survive the lockdown by borrowing from families, friends and colleagues to pay rent, school fees and other daily expenses. Some were able to do so while others were not.

The stress of the situation was palpable. Many respondents expressed hopelessness and exhaustion, with little financial or mental reserves left to draw on. Their focus was on feeding their children, fear of another wave of the virus, and of being disconnected from already strained social networks. One female construction worker said: “If COVID [lockdown period] continues for another three or four months, I don’t know what my life will be.”

These early blanket lockdowns profoundly affected marginalised groups, such as female ethnic migrant workers, in multiple ongoing ways. As life opened up again, these groups weren’t simply starting up from where they were before the pandemic, but from even more vulnerable positions: in different jobs with lower pay, with savings and social capital exhausted, and suffering higher levels of stress and exhaustion. Even though there hasn’t been another lockdown of the same severity, these impacts continued to reverberate months later.

As Asian governments respond to the growing numbers of ‘new poor’ through special COVID-responsive social assistance packages, they struggle to reach workers, such as those we interviewed, who have no proof that they were previously employed. This affects a vast number of informal employees who form the majority of the workforce across the region. As a result, the social assistance programs themselves risk further contributing to and deepening inequalities.

Our research illustrates the concrete ways in which the lives of vulnerable groups have become harder during COVID-19. Short-term measures have had long-term impacts on the rising levels of poverty and inequality that are now an inevitable outcome of the pandemic across many parts of Asia. These are likely to be felt all the more in the region’s densely populated cities, where outbreaks are becoming more common and longer lasting, and where even localised ward or district movement restrictions can affect hundreds of thousands, if not millions, of residents.

Such considerations are extremely timely as large parts of the country, including Hanoi, are under their strictest lockdown yet. This follows a fourth wave of the pandemic that the government is struggling to control.

In many cases, local governments are now trying to reach informal workers affected by the movement restrictions, with government packages. But the traditional lack of portability of benefits across provincial borders, where papers from places of residence are required to register, hinders that effort, as does the arbitrary application of the rules by local officials. Officials in Ho Chi Minh City, the country’s largest city and the most impacted by the current wave of the pandemic, have recognised this and, according to local media, are considering removing the residence provision for cash transfers.

Catching up with three of our interviewees as Hanoi’s latest lockdown stretched into its third week, we found them unable to access government assistance and very, very concerned for the future.

This article draws on research exploring the varied impacts of COVID-19 on urban inequalities in Asia, funded under a partnership between the Department of Foreign Affairs and Trade and The Asia Foundation, together with Kore Global. The views expressed are those of the authors only.

Tran Chung Chau
Tran Chung Chau is Junior Regional Governance Specialist for The Asia Foundation (TAF), based in Hanoi. She holds a Masters degree in Public Policy from Sydney University and has worked for over a decade with local and international civil society organisations in Vietnam.

Nicola Nixon
Nicola Nixon is Governance Director at The Asia Foundation, based in Hanoi. She is a Visiting Fellow of the School of Regulation and Global Governance at The Australian National University.