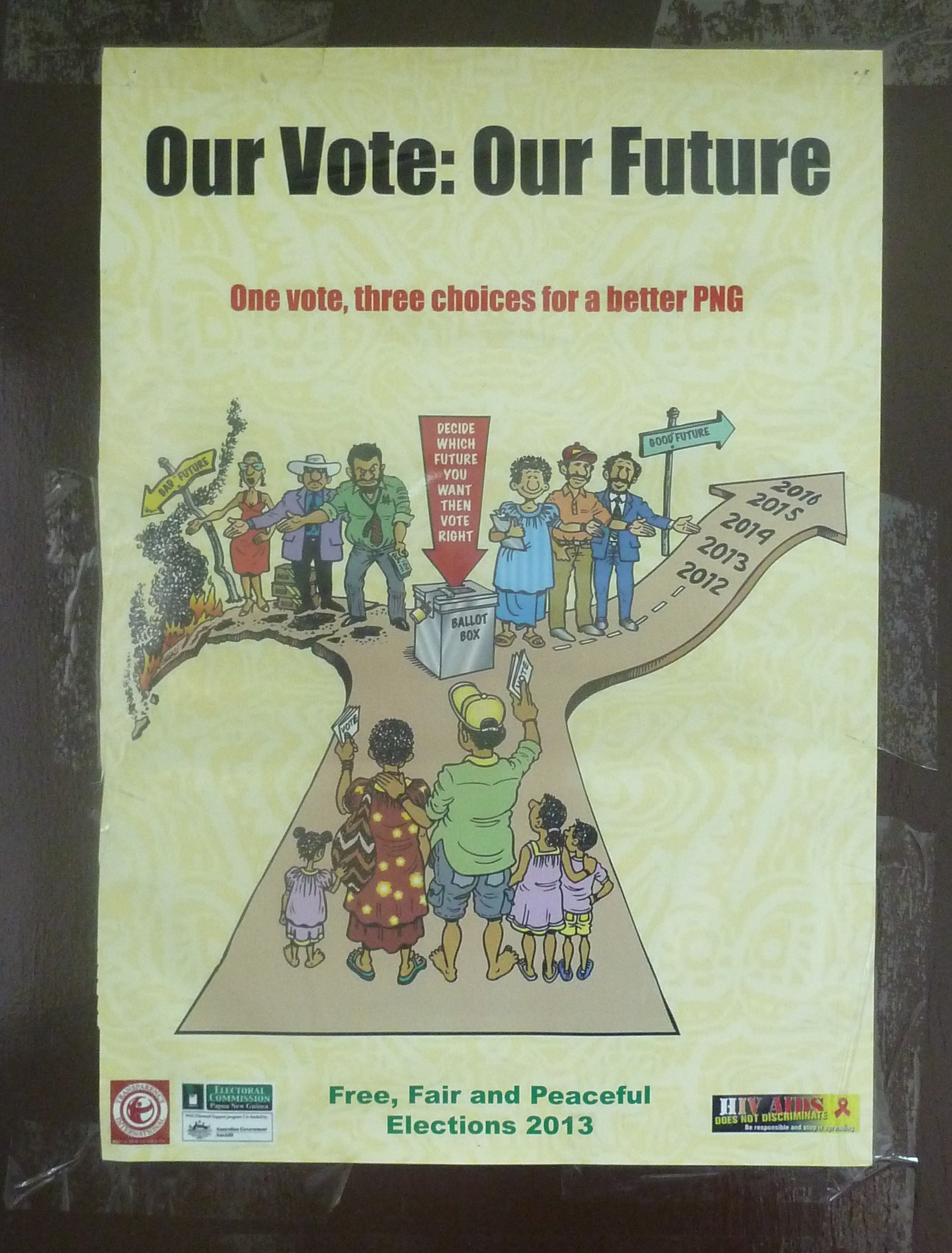 Papua New Guinea went to the polls in June–July 2017 for its ninth general election since independence. Despite a record number of women standing — around five per cent of the total number of candidates — no women were elected in any of the 111 seats. This report draws on discussions from a debrief in Port Moresby in September 2017 with 26 women who contested the election. Participants had contested in all four regions of Papua New Guinea, so the debrief captured a variety of perspectives and experiences. This blog highlights some of the key themes that arose from these discussions.

Many female candidates highlighted the issues they had in resourcing their campaigns. In general, women contesting Papua New Guinea elections have fewer financial resources than their male counterparts, and well-resourced campaigns are often the most successful (see also Haley and Zubrinich 2013). Participants in the debrief shared their difficulties in raising funds. Most of the candidates affiliated with political parties reported that those parties did not provide financial or other resources to them, even when help had been promised, which compromised their campaign plans and even damaged their credibility as candidates [1]. Many debrief attendees reported that their campaigns had been a financial strain on themselves and their families.

One way of countering resource shortages, which was highlighted in the debrief, was pooling resources with other candidates — sometimes men, but often other women. Thus, female candidates running in separate seats (for example, if one was running for the provincial seat and one for the open seat in an area), or even the same seat, would work together. This involved sharing transport and coordinating events, arranging preference-swapping deals and providing moral support during the campaign period. These networks of female candidates were used in different parts of Papua New Guinea during the campaign. Participants suggested nurturing these networks and potentially also using them for mentoring purposes, and for supporting women who want to enter local-level politics.

The importance of starting early was emphasised by candidates and is borne out by research on Papua New Guinean electoral politics. When women began to visit voters after the official campaign period had started, many were told they were ‘late’, and that some of their male counterparts had been campaigning for a long period before. While campaigning is not allowed outside the official period, women attending the debrief stressed the importance of ‘visibility’ — visiting different areas of the electorate throughout the electoral cycle, so that you are well known before an official campaign begins.

Several of the higher-performing female candidates in the debrief noted that they had only decided to run relatively late, which gave them much less time to prepare. A longer preparation time was seen as the potential difference between winning and losing. Making your intention to run known early can also give your campaign a boost, through allowing more time to raise funds; perhaps discouraging male relatives from also putting up their hands and possibly splitting the vote; and signalling your interest to potential supporters, so they do not promise their votes to other candidates first.

Money politics was a recurring theme during debrief discussions [2]. The general consensus was that money politics was practised differently from past elections, but that the results were ultimately no less detrimental to the chances of female candidates. The election campaign was reported to be ‘dry’ in some electorates, with less money handed out than in previous elections, but with significant amounts of money concentrated in the hands of a few parties to support their favoured candidates. In areas where the campaign period was ‘dry’, women candidates felt they had a more even playing field to work on; however, in many places money politics was practised in the late stages of the campaign, around one to two weeks before polling or on the eve of polling. This was allegedly in the form of both vote buying (and gifting) and the bribing of electoral officials.

Female candidates reported feeling disadvantaged by issues with electoral administration. The most often cited were the serious problems with the electoral roll, as reported in the media and by international observer teams. On a structural level, dealing with issues of money politics, instances of electoral fraud, and failures in electoral administration were seen as vital to address if the aim is to increase women’s political representation.

There are undisputed dangers involved in engaging in Papua New Guinean politics as a woman (or indeed, as a man). One woman reported being attacked by supporters of a rival candidate; others reported receiving threats of physical violence and destruction of property. Yet the vast majority of debrief participants reported positive — if at times challenging — experiences in contesting the 2017 election. Most agreed they would consider running again in future elections.

This is important, as evidence shows that many Papua New Guinean politicians were not successful the first time they contested. The majority of politicians who entered parliament for the first time in 2017 had contested at least once before, and three in five of those who unseated incumbents had run in the same seat in the previous general election. It is important to take a long-term approach to entering politics. Thus, encouraging unsuccessful female candidates to recontest — especially those who achieved highly credible placings in their electorates, as numerous debrief attendees did — is a crucial part of the strategy to increase women’s representation in the future.

This post was originally published as Department of Pacific Affairs (DPA) In Brief 2017/38.

[1] There were exceptions to this rule, including the Social Democratic Party which provided significant financial and strategic support to one debrief participant.