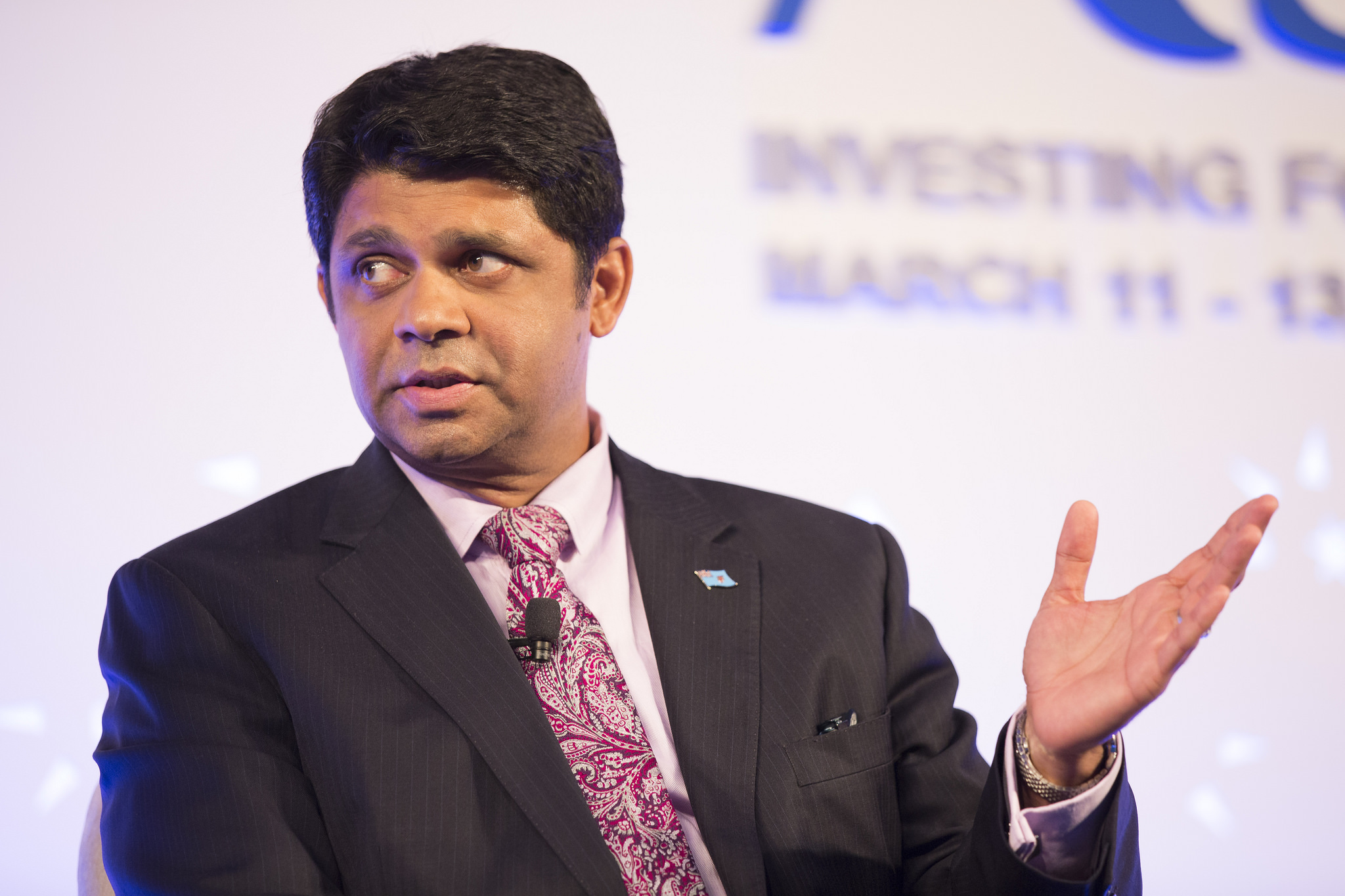 By Matthew Dornan and Neelesh Gounder

Fiji’s 2017-2018 budget is full of big spending promises aimed at winning votes as the 2018 election approaches. Budget papers project a sizeable budget deficit, equal to 4.5% of GDP (with an underlying deficit of 7.8% of GDP). Winners from the budget include civil servants, who see salaries (overall) increase an astounding 18% in one year; recipients of social welfare payments and tertiary scholarships, both of which have been expanded; and workers who will benefit from an increase in the income tax threshold (raised from $16,000 to $30,000). The Bainimarama–Sayed-Khaiyum government has never been one to shy away from deficit spending. However, this budget, delivered amidst positive economic conditions, is particularly notable in this respect.

Budget projections and the deficit

Budget papers project a budget deficit of $499.5 million. Expenditure is budgeted to be $4.35 billion while total revenue is expected to be $3.85 billion. However, we need to take these figures with a grain of salt. The government since 2012 has not once met its budget forecasted revenue (see Table 1).

The main reason for this is the projection of asset sales which never materialize, but are nonetheless budgeted again the following year (see Graphs 1 and 2). Previous budget analyses have noted the very significant underlying deficits in past budgets (see here, here and here). This year is no different. If we do not include the revenue from one-off asset sales in revenue projections — and there are strong reasons not to, as these asset sales will reduce future government earnings — the underlying deficit projection is for almost $900 million, or 7.9% of GDP. The other reason to question the 4.5% deficit projection is the fact that asset sales projected in previous budgets have not materialised. 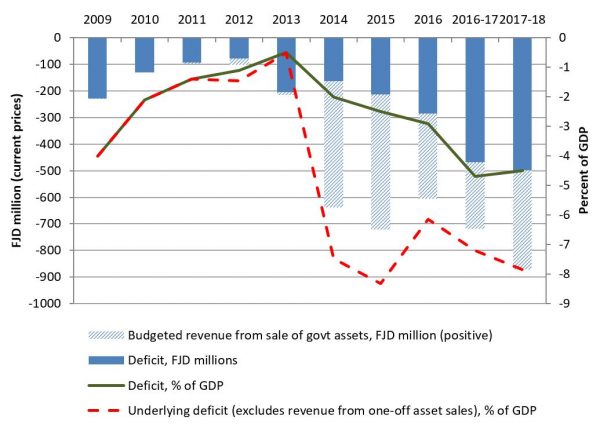 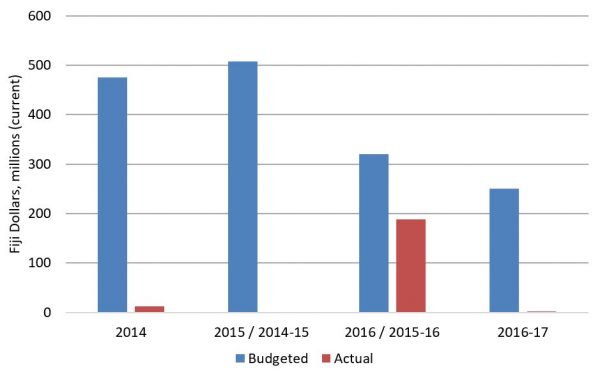 What has kept deficits and debt in check in previous years, despite the failure to realise asset sales, is the fact that expenditure included in the budget has not materialised (see Table 1). Far from being the result of prudent fiscal management, as stated by the Minister for the Economy in his budget address, this systematic underspending points to ongoing capacity constraints within the Fiji government, and to a disconnect between expectations and reality. At its heart, this is poor public financial management. What is more, the inaccuracy of projections appears to be getting worse (as evident in Table 1). Just recently the head of the Fiji Roads Authority resigned, citing unrealistic expectations from the government and the board.

Ongoing problems with budget projections reduce our confidence that spending commitments made in this year’s budget will actually be delivered upon. Significant one-year increases, such as a one-year 30% increase in the health budget, further highlight this point.

This brings us to the issue of debt. There is nothing wrong with deficits and debt. Eventually, however, growing debt levels will need to be addressed by the Fiji government. With this budget, government debt will be over $5 billion. This is manageable in the content of a growing economy. However, it would become problematic in the case of an economic downturn. There are also questions about the future economic impacts of the debt burden. High levels of current spending are likely to come at the expense of future spending (as government in the future pays down that debt) — especially when that spending is operational, such as in the case of civil service salaries. Such spending involves an inter-generational transfer away from future generations.

It is unfortunate that the government has not made greater effort to meet its own medium term fiscal strategy. As stated in the budget supplement, the government aims to achieve deficits below 3% of GDP and debt levels below 40% of GDP (that debt target remains unchanged since 2008, although it has never been met). It would be prudent to start sooner rather than later down this path, in order to avoid needing to reduce expenditure under weaker economic conditions. The high deficit and growing debt highlight an ongoing challenge for the current government as it continues to push a low tax but high expenditure fiscal model.

Climate change has been given a high profile in the budget, with the first chapter of the budget supplement (following the introduction) dedicated to discussing climate-related action. Much of the discussion is occupied by the UN Oceans Conference and COP23, although a list of budget measures supportive of climate action is provided at the end. These are generally welcome. However, their significance will depend on implementation.

One key difference is the prospect that the Environmental and Climate Adaptation Levy will be earmarked for adaptation — as flagged in the budget address. There is no evidence that this has ever occurred — much to the frustration of environmentalists in Fiji — so again, implementation will be key.

The extension of the Environmental and Climate Adaptation Levy to direct taxation of income over $270,000 will also have no impact on overall tax revenue or any incentive effect: the Social Responsibility Tax is being lowered by the same amount so as to ensure the tax burden of high income earners does not increase. This is nothing but a change in name.

One opportunity that has been missed, both in this budget and those before it, is the use of fiscal policy as a risk mitigation measure against natural disasters. The Fiji Government currently allocates $2m to a disaster relief fund each year – an amount that is clearly inadequate. It does not insure public assets. There are a number of financial tools that could be adopted by Fiji to better insure against disasters like Tropical Cyclone Winston. Many are already advocated by donors. These should be considered in the future.

More broadly, a conservative fiscal policy would better prepare Fiji for future disasters, both economic and environmental, including for events like TC Winston (by ensuring government had the financial resources in place to cope with the initial response and the subsequent rebuild). The continuation of unnecessarily high deficits, all of which prevent a reduction in Fiji’s debt burden, will have the opposite effect.

Matthew Dornan is Deputy Director of the Development Policy Centre at ANU. Neelesh Gounder is Senior Lecturer in Economics at USP.

*This article when first published incorrectly referred to beneficiaries of the tax income threshold change as low-income earners, when the text should have read middle-income earners. The text has since been corrected.