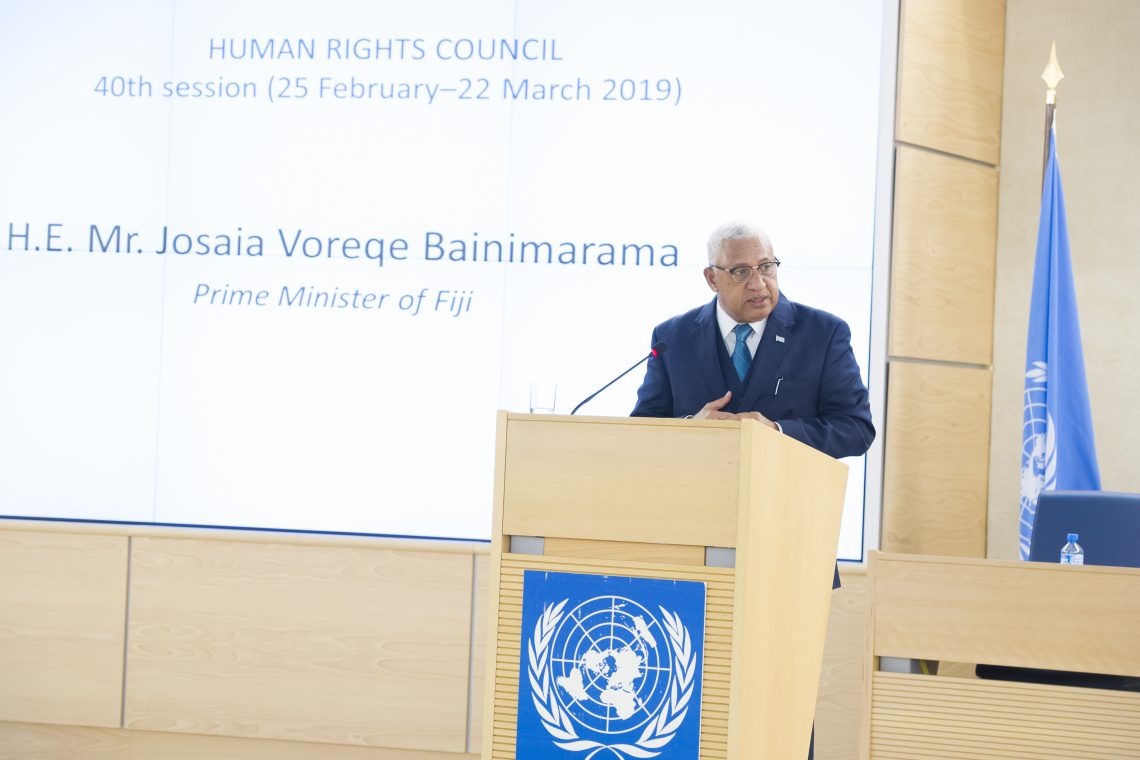 This November in Geneva, the United Nations examined Fiji’s human rights record for the third time. Every state must undergo a Universal Periodic Review (UPR) every four years to take its turn to be scrutinised by other UN member states on their progress in promoting and protecting human rights, and to assess a range of recommendations for improvement.

In its report to the Human Rights Council ahead of the session, the Fiji government reaffirmed its commitments under the International Covenant on Civil and Political Rights (ICCPR) to freedom of expression and assembly, as well as its constitutional guarantees of freedom of the press. However, research by the CIVICUS Monitor – a global tool tracking civic space – shows that democratic freedoms are under attack in Fiji. While the country enjoys a positive image on the international stage, for many citizens of the South Pacific’s largest island nation, and its media, the reality is anything but.

Prime Minister Frank Bainimarama’s FijiFirst government took the reins in 2014, elected by a population with high expectations. The elections marked a dramatic shift from the previous eight years of ruling by decree following the 2006 coup. But the honeymoon wasn’t to last: to hold on to this newfound power, Bainimarama has muzzled any criticism of the state. The Fiji Times – one of the very few independent news outlets that has refused to toe the government line – was targeted in 2012 and 2016 for its reporting. Human rights groups believe that charges lodged against the paper were politically motivated. This judicial harassment continued until their eventual acquittal by the Fiji High Court in May 2018.

An array of restrictive laws has been deployed by the authorities to silence dissent. Sedition provisions in the Crimes Act have been used by the Fijian authorities to target the media and opposition politicians while the Public Order (Amendment) Act 2017 has also been used to harass journalists and civil society. The Media Industry Development Act 2010 has created a chilling effect for media and press freedom. Other crude tactics have also been used by the state. Recently a 16-year-old boy was assaulted by security officials for a posting on Facebook criticising the prime minister.

More recently, the government has set its sights on weakening the power of trade unions and their strong voting bloc. Over the past two years the Fiji Trade Union Congress has been denied permission to hold peaceful marches on at least six occasions, without a valid reason. All these strict controls allowed Bainimarama to hold on to power again in 2018

These findings are also reflected in research undertaken by the Human Rights Measurement Initiative (HRMI), a global project to track the human rights performance of countries. In June 2019, HRMI produced scores for a diverse sample of 19 countries. Fiji scored 3.5 out of 10 for Empowerment rights, which include the right to participate in government, the right to opinion and expression, and the right to assembly and association. This puts it near the bottom of the table.

The woefully low score of 2.7 out of 10 for freedom of expression and opinion also puts it in the bottom quarter of countries surveyed, in a similar position to Venezuela and Vietnam and shows that many people in Fiji do not feel able to share their thoughts with others without fear. The research identified journalists, people with particular political views, human rights advocates, peaceful protesters, and members of labour unions – anyone, that is, who is likely to express opinions contrary to those of people in power – as most likely to have this right abused. Fiji’s score for freedom of assembly and association was a pitiful 3.7 out of 10.

The international community has often pulled its punches when it comes to addressing Fiji’s human rights shortfalls, whether because of its leadership on climate change or because of its strategically important role in the Pacific. However, at the recent review, Fiji’s dismal record on civic freedoms was too great to ignore: numerous states raised concerns and recommendations on freedom of expression, assembly and association, press freedom, and protection of human rights defenders and journalists.

The credibility and independence of the Fiji Human Rights and Anti-Discrimination Commission has long been under fire for its failure to investigate abuses by the security forces among other civil and political rights violations. During Fiji’s UPR, Australia particularly pushed for reform of the Commission to ensure that is upholds the Paris Principles, a set of international benchmarks against which national human rights institutions can be accredited by the Global Alliance of National Human Rights Institutions should they meet these criteria of independence.

While the Fiji government has accepted a number of recommendations – that is, committed to addressing them – it has yet to make any decision on whether it will review or repeal restrictive legislation such as the Crimes Act, the Media Industry Development Act and the Public Order (Amendment) Act, in order to bring them in compliance with Fiji’s obligations under the ICCPR. It has until the next Human Rights Council session, which kicks off at the end of February 2020, to decide whether or not to accept these recommendations.

But recommendations alone will not effect the change on the ground that is so sorely needed. If states don’t want to reiterate the same recommendations at the Council four years from now, it is critical that Australia – and other states who made such recommendations – take concrete steps to follow up on their implementation. This must include increased engagement with the Fiji government and providing direct support to civil society, trade unions and human rights defenders, who stand up for those who dare to speak out.

In March 2019, Fiji acceded to the vice-presidency of the UN Human Rights Council, a step that underscores Fiji’s growing international role. During the pledging event by candidate states to the Human Rights Council in Geneva in September 2018, Fiji’s representative to the council, Ambassador Nazhat Shameem Khan, committed to giving the South Pacific region a voice in the world’s main human rights body. Fiji should start by allowing its own citizens to speak out and express themselves at home, without fear of reprisals.