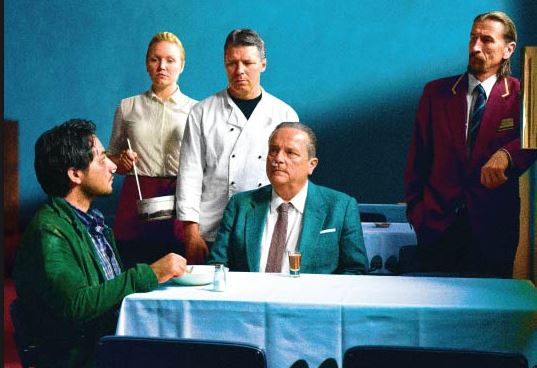 A scene from ‘The Other Side of Hope’

Film review: The Other Side of Hope

To be a refugee is to wait. Wait in a camp or at a border, wait to be resettled, issued a visa or to find another option, wait to leave, wait to know, wait to return. Much of the waiting must seem endless, especially the waiting to know about family and friends at home or lost along the way. Surely most people are driven to despair?

This sense of waiting – or as one character tells us, “of neither moving backward or forward” – is at the centre of Finnish director Aki Kaurismäki’s film The Other Side of Hope. It’s a film that has been described as both “coolly comic” and “humane”. David Edelstein got wordy in his review for Vulture and called it “tragic, funny, depressing, and inspiring”. In the New York Times, AO Scott praised it for being “a touching and clearsighted declaration of faith in people and in movies”.

The story revolves around two men. Khaled, an asylum seeker from Syria who arrives in Finland after stowing away on a container ship from Poland; and Wikström, who leaves his wife and his job, and buys a grimy restaurant that serves sardines in a can as it’s plat de jour. Wikström’s is a funny kind of mid-life crisis, but it’s one that sees him act as a saviour to Khaled.

After having his claim for asylum rejected, Khaled takes to the streets, determined to stay in Finland rather than being repatriated to Syria. He ends up sleeping behind the rubbish bins of Wikström’s restaurant and it’s here that the friendship begins, with a fist fight.

Kaurismäki cleverly injects a deadpan humour into the goings-on at the restaurant. In this otherwise heart-wrenching and sadly familiar refugee story, the gradually funnier and outrageous happenings at the restaurant draw you in and open you up to the drama that sits alongside them.

The dingy Golden Pint restaurant, with its faded décor, dour wait staff, and a cook that routinely has a cigarette burning at the edge of his mouth – while in the kitchen – is an unlikely safe-haven, and yet this is what it becomes, and not just for Khaled. Khaled is taken in, given a job and a place to stay. The wait staff are paid – a substantial improvement on their terms of employment under the last owner – and given a sense of security, which you recognise as missing from each of their lives. And Wikström is his own boss, with the space and the freedom to do as he pleases. The fact that he has little idea of how to run a restaurant doesn’t faze him: his attempt to boost profits by turning it into a sushi bar is a debacle and laugh-out-loud funny.

The relentless condition of waiting and the absence of a safe-haven are the burden of all displaced people. Kaurismäki’s film shows how the first can be alleviated by simple human kindness and the second can be met without needing to give up too much. This message is conveyed without sentiment or grandstanding, which is one of the big achievements of the film. The other is to send the audience away with the suggestion that, as David Edelstein puts it, “you can indeed keep going, past despair, and come back around to hope”. They’re valuable messages in the context of the world’s growing migration crisis.

The Other Side of Hope is showing at Palace Cinemas around Australia.