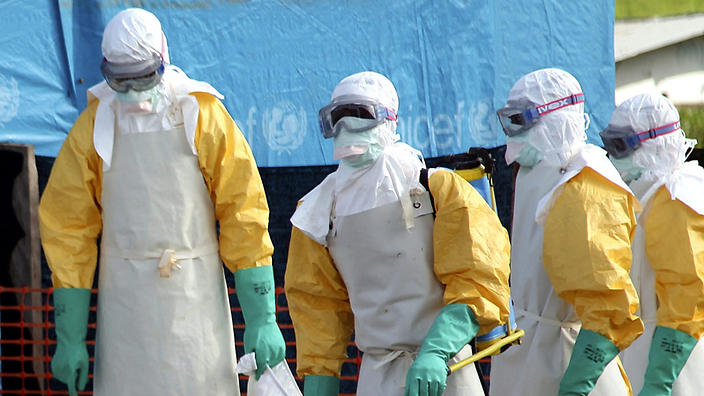 Five lessons for Australian aid from the Ebola crisis

The Ebola outbreak in West Africa has claimed more than 4000 lives and shows little sign of slowing down. The World Health Organization has asserted that US $1 billion is needed to stop the epidemic. What lessons can the Australian aid program learn from the crisis and its response to date?

Over the past two months, the United States, United Kingdom, Cuba, Uganda and China have all mobilised field operations, including trained health workers, to support West African nations. The Australian government – despite repeated calls by a number of groups – has not sent a team for one simple reason: the Australian military does not have a team trained in infectious diseases nor the transportation assets set up for this kind of endeavour.

The Foreign Minister has stated that she is not going to send a team from Australia to help prevent the outbreak from spreading because there is not a “credible plan” to evacuate those who might fall ill. The mantra has been repeated frequently and there does not seem to be much urgency to develop such a plan. A Ugandan doctor working in Sierra Leone was recently evacuated to Germany, but Australia has not managed to set up a system to get those infected to treatment centres anywhere in Europe.

While Ebola feels very far away, most infectious disease experts expect an influenza outbreak to emerge from Asia over the coming decades in the wake of bird flu, swine flu and SARS over the past 11 years. Not having the capacity to address an infectious disease outbreak in Liberia is one thing but when a new outbreak emerges in our immediate region, DFAT will not have the luxury of spending weeks developing a team and a “credible plan.” It should be made a priority now.

If Ebola or a virulent influenza strain emerged or was transported to Papua New Guinea, Timor-Leste or West Papua, do we think those countries would fare any better than Liberia or Sierra Leone?  Similar conditions exist: weak health systems; dramatic shortages of health workers; insufficient equipment; general mistrust of the government; and traditional practices that might put people at risk. For example, Liberia, Sierra Leone, Papua New Guinea and Vanuatu all have essentially the same number of physicians per 1,000 population.

If an outbreak managed to get its way into the slums of Port Moresby or Dili, the epidemic spread would likely look very similar to that of Monrovia and Freetown in West Africa.

At the same time, Australian aid has focused much of its attention in recent years on vertical disease-focused programs such as those on HIV, malaria and non-communicable diseases. The fragmentation created by such vertical systems has been critiqued as well as the fact that they often weaken – rather than strengthen – health systems.

The Ebola crisis has highlighted the need for more attention in building weak health systems.  Many donor governments are reluctant to engage too deeply in health system strengthening as it implies the inclusion of some recurrent expenses, such as health worker salaries and equipment procurement.

But evidence shows that health system-focused efforts to, for example, strengthen health insurance schemes have succeeded in increasing access to health services and reduce catastrophic spending. That institutional strengthening leads to sustained achievements in health outcomes.

The Australian aid program has done some work on building health systems but there is more that can be done to reduce and discourage the fragmentation in health funding. Those managing the aid program have been rightly skeptical about the viability of the Global Fund for AIDS, Tuberculosis and Malaria model in the Indo-Pacific. Health systems are by their nature local and context-specific, so the aid program needs to work closely with partner governments to craft credible, long-term system strengthening plans focused on human resource planning, health financing, medicine availability and improved health sector governance. It’s hard and slow work but it is the only way that long-term sustained progress will be achieved.

3. Scholarships are not sufficient to grow health worker numbers as needed

Related to the point above, health worker numbers and training are insufficient in many developing countries to respond to the health challenges faced. Australia has supported institutions such as the Fiji School of Medicine and has provided scholarships for students to study in Australia, but this is not meeting the broader need in countries with such dramatic shortages.

At the same time, the Australian health system welcomes a large number of doctors and nurses from low- and middle-income countries to Australia to care for us – thus depriving those countries of essential health staff.

The US Government has stopped fiddling at the margins and has developed a large scale program to strengthen the capacity of African medical and health professional colleges to build the next generation of health workers. The Medical Education Partnership Initiative is a joint effort of the Office of the US Global AIDS Coordinator, the Centers for Disease Control and Prevention, the Department of Defense and the National Institutes of Health. It has created long-term partnerships between 13 African universities and US universities whereby faculty from the American institutions are seconded to the African site to build the capacity of teaching staff over a number of years.

The Australian aid program has for too long been seen as a source of funding by Australian universities rather than a partner for development. The aid program should ask Australian universities to come on board as key partners for the delivery of large scale capacity building and cooperation to build the ability of health training institutions in the Indo-Pacific to produce the required numbers and skills in health workers.

The Ebola outbreak highlights the need for cutting-edge medical research. The Australian aid program has committed more funds and focus to health and medical research with $30 million per year being allocated. While this represents an increase, $30 million is not enough to catalyse the innovation needed for product development and preparation for use where it is needed most. Funding for research and development for diseases that predominantly afflict those in developing countries reached $3 billion in 2010. Adding 1% to that figure hardly positions Australia as a country with a strong and innovative health research community focused on diseases of importance in the Indo-Pacific.

5. Africa program cuts in the face of Ebola

The Africa program was essentially cut in half earlier this year leaving a rump of mining and agricultural programs along with scholarships. While the government is trying hard not to engage too deeply in Africa, it has committed $18 million to the Ebola response presumably from the humanitarian budget. Given the seeming increase in disasters globally, an increased humanitarian budget would be appropriate.

Liberia and Sierra Leone have been removed from the list of countries eligible for masters degree scholarships from Australian universities. While this is not a good look (especially as Australian graduates are on the front lines), the reduction in the number of countries in which Australian aid engages in Africa is entirely appropriate and is something I have argued for a long time. The aid program needs a clearer Africa strategy that positions Australia as a credible partner focused on a small number of countries and a few sectors. The “Looking West” Africa strategy was meant to be valid for 2011-2015 but has been superseded by events. It is time for a renewed and strategic engagement in Africa aligning trade, aid and support for those most vulnerable.

Joel Negin is Senior Lecturer in Public Health at the University of Sydney.