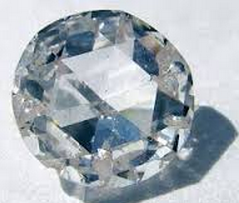 Flaws in the glass: allocation quirks in the 2015-16 Australian aid budget

In allocating the aid cuts  announced in December 2014, Australia’s 2015-16 aid budget for the most part followed a simple and implacable logic: protect the immediate neighbourhood and humanitarian programs, pay the bills that have to be paid, all but eliminate aid to far-flung places and reduce everything else by 40 per cent to achieve the required average cut of 20 per cent. As Stephen Howes and Matt Dornan have shown, Australia effectively took a $16 billion detour into terrain normally occupied by more generous second-tier donors and is now returning to its former path, apparently unchanged by its experiences.

The Australian aid program can be divided into ten exclusive and exhaustive components, which are listed below together with the 2015-16 budget allocations to each component, and a comparison with allocations to the same components in 2014-15. 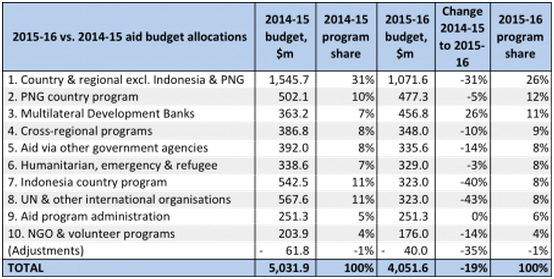 Perhaps it was not considered feasible, diplomatically or practically, to use this year’s savagery to alter the balance of allocations in favour of the countries and the international organisations, funds and programs most likely to use aid effectively. Certainly it would have been desirable to see aid allocated more along these lines, particularly by extending the cuts to at least some countries in the Pacific so that cuts in higher-impact areas of the aid program might have been less. Performance-based allocation was in fact a central theme in foreign minister Julie Bishop’s mid-2014 ‘new aid paradigm’. (It might be recalled that she promised, in launching that policy framework, to establish a Performance Incentive Fund in the 2015-16 budget, but this idea has now been dropped, and not only because it can no longer be afforded.)

However, changing allocation shares is clearly a lot easier with a growing aid program. It is understandable, at a tactical level, that a government would like the idea of being able to say to its various partners that they were in some sense treated alike. With these aid cuts, the desire to be able to say this has prevailed over some other quite glaring considerations, most notably the stark difference between Asia’s fast-growing middle-income countries and its least-developed countries, including Afghanistan and Myanmar. The latter, like the former, lost 40 per cent of their Australian aid.

In fact, though, not all consumers of Australian aid were treated alike, or in line with the logical schema above. Seven instances of this are detailed below.

Other departures from the logical schema are less significant. For example, it is not possible to read anything into reductions in funding to global health, education and environment programs. Payments to the relevant organisations are lumpy and likely to have been concentrated in 2014-15, when more funding was available. This, for example, explains the big drop in funding for the Global Partnership for Education in 2015-16. Likewise, cash payments to Multilateral Development Banks jumped by 26 per cent, but this is just a case of the past asserting itself in the present. Large replenishment commitments under the previous government, and in the early days of this one, are coming home to roost.