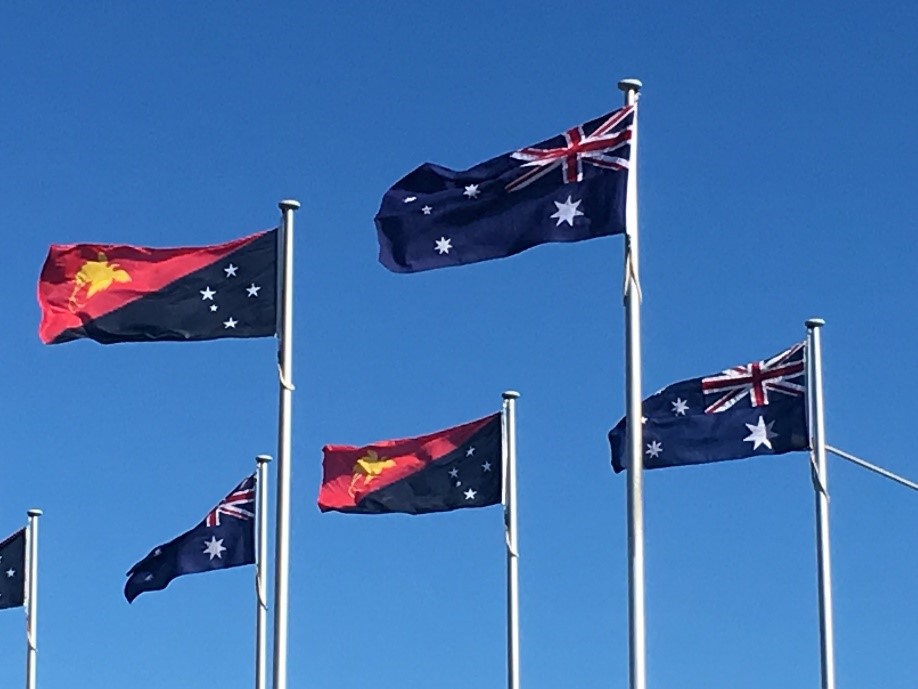 A sign of a shift in the partnership between PNG and Australia? (Credit: Michelle Nayahamui Rooney)

Flying the PNG flag in Canberra

On Sunday 22 July 2019 the Papua New Guinean community in Canberra, Queanbeyan and nearby New South Wales were treated to a poignant and powerful informal gathering with the visiting Papua New Guinea (PNG) Prime Minister, Honourable James Marape, his wife, Rachael, and his delegation of ministers and senior bureaucrats. Although small, the PNG community comprises several hundred long term residents, and a transient group of students, defence force personnel, bureaucrats on attachments, and visiting dignitaries and our families.

One topic that featured in several conversations I had was the thrilling rare sight of the Papua New Guinean and Australian flags fluttering alongside each other on either end of the Commonwealth Bridge, set against the Australian Parliament House in the background. The gathering, like the fluttering flags, invoked sentiments of national pride, reflections of what it means to be Papua New Guinean living in Australia, and was infused with symbolism reflecting the deep and ambivalent historical and contemporary relationship between PNG and Australia. 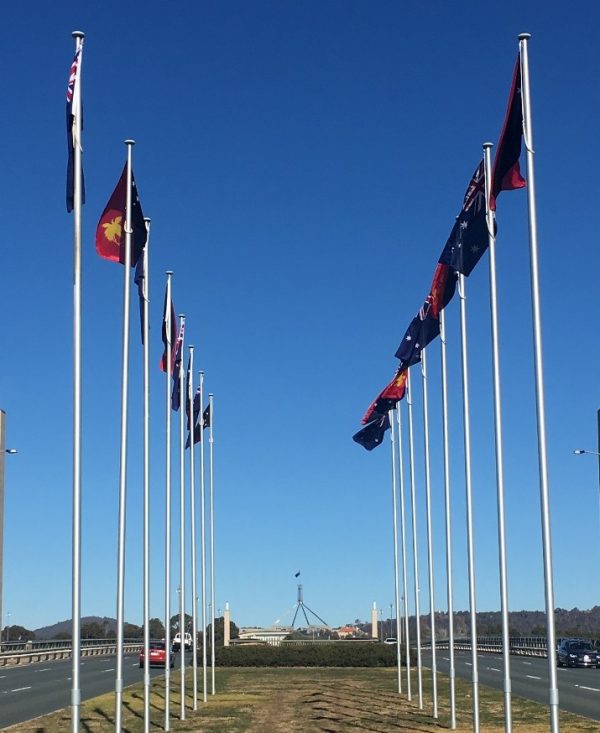 The Prime Minister and his delegation arrived quietly without any fanfare and joined the community. The proceedings were informal and commenced with the national anthem symbolising 1975 as the point in history at which PNG was granted independence from its colonial administrator, Australia, and came into existence as a contemporary nation state.

Reflecting the, less prideful, deep colonial and mission history, and the precolonial history, the Canberra Peroveta choir, led by community spokesperson, Mr Deveni Temu, welcomed the visiting dignitaries with the Motuan hymn, Sivarai Namo – Good News. It was explained that the hymn speaks about the hoisting of the flag of Christianity to enlighten the world. These hymns were introduced into the local vernacular in the late 1880s during the time of the early colonial and missionary encounters along the Papuan Coastline. Parallel to the missionisation process, in 1884 the British government hoisted the British flag in Port Moresby and proclaimed the territory as a protectorate of the British Empire.

With these national and historical pieces framing the occasion, the tone shifted towards the present and the future as Prime Minister Marape took the floor to address the audience of Papua New Guineans living abroad. He noted that the change in leadership we witnessed earlier on in the year marked a generational shift – a changing of the guard – from the older generation to the younger generation. He referenced his vision of the future PNG to the fiftieth anniversary of the landing on the moon; reflecting on human progress and how dreams come into reality.

Some themes in his speech resonate with the official government to government joint media statements, while other themes were more nuanced towards a Papua New Guinean audience living in diaspora and engaged internationally.

He stressed unity by acknowledging that despite being one the most culturally, linguistically and bio diverse countries in the world, one of PNG’s greatest achievements was that after 44 years of national independence, the country could still sing one national anthem and fly one national flag. He noted that on this front, PNG has flown her flag very high. He was circumspect though, noting that the imminent Bougainville referendum will test that unity and diversity and that leaders will need to handle this in a diligent manner to maintain harmony and unity.

Mr Marape emphasised a reframing of the narrative in PNG’s self-representation by clarifying that, for his government, the phrase, ‘take back PNG’ was about shifting from the negativity and pessimism that dominates portrayals of PNG towards progress and optimism. He also clarified that in the phrase the ‘richest black nation on earth’ he uses the term ‘black’ to connote the contemporary struggles facing PNG and the phrase is about envisioning a better future for PNG.

He made it clear that while PNG’s dominant foreign policy position is ‘friends to all and enemies to none’, PNG has always been a friend to Australia. However, he made it clear that his mission, at the invitation of his Australian counterpart, would be focussed on negotiating PNG’s agenda.

Although he did not discuss any specific concrete policies or plans, he announced that his government was in the process of undertaking consultations and would launch its blue print to achieve the vision of being the richest black nation on the planet within ten years on 16 September, PNG’s Independence Day. In line with some of the official statements he made, some issues he touched on included turning PNG into a food basket for Asia. This includes becoming a rice sufficient nation. He spoke about the review of the extractive industry sector. He also framed his leadership within Christian principles that bind the diverse nation together.

What he did not say was also important. Mr Marape did not mention issues like the presence of China in the region or border polices that have shaped PNG’s hosting of the Australian off shore processing centre on Manus. He did not mention the most pressing issue of violence against women, or any women’s empowerment issue for that matter. Neither did he mention if the richest black nation would be equitable and fair and based on democratic principles and the rule of the law. Perhaps these details will come out in the blue print.

At face value, the visit seems symbolic of a shift in the bilateral partnership between the two countries and an opportunity for both leaders, as newcomers to their respective positions in relation to each other, to forge new agenda. The ambivalence that characterises the relationship between the two countries still exists. The historical patriarchal role that Australia has played seems to be moderated by a stronger PNG voice adamant about flying her own flag on her terms. At the people to people level, for those of us Papua New Guineans living abroad, flying the PNG flag high is just part of our life. Sometimes we are fanatical, especially if a PNG team is in town or on Independence Day. At other times, we struggle to resist the dominant framings of our PNG heritage as we ourselves immerse in diaspora life and the multicultural communities we are part of. Either way, we continue to engage with our home country regardless of government policies. Whatever level the bilateral relationship between PNG and Australia is viewed, it was symbolic and rare to see the flags of both countries line the Commonwealth Bridge, and this is a signal of changing times.