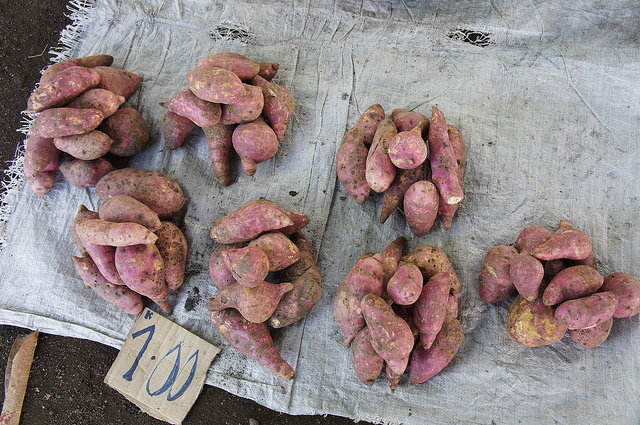 The current El Niño event in the Pacific Ocean is disrupting food production in Papua New Guinea and Indonesian Papua. Whether the current El Niño event will continue to develop for the rest of 2015 is uncertain, but likely. Nor is there a sure way of predicting the severity of food shortages in PNG from the severity of an El Niño event. But already this year the impacts on food production in PNG have a worrying similarity to the way events unfolded in 1997, when food and water shortages were more serious than they had been since 1941 and possibly since 1914.

Around 80 per cent of food consumed in PNG is grown there. A strong El Niño event reduces rainfall significantly in normally wet areas for some months and prolongs dry seasons. This is because PNG’s characteristically high rainfall is the outcome of low air pressure, upward movement of air in the Walker circulation, onshore winds crossing warm seas and picking up large amounts of moisture, and high mountain ranges forcing the warm moist air up in altitude, where it cools and the moisture condenses and falls as rain. During a strong El Niño event, the western Pacific cools and the Walker circulation reverses so that cool, dry, high altitude air descends over PNG. The result is less than average rainfall for some months and significantly less cloud cover. At altitudes above 2,200m the lack of cloud cover at night allows temperatures to fall to below zero and frosts to occur.

Historical records reveal some of the impacts of El Niño. There were 11 droughts associated with El Niño events in PNG between 1896 and 1997, but severe disruptions to food and water were reported only in 1902, 1914, 1941 and 1997. In 1972, the Australian colonial administration, in ignorance of how high altitude people move to lower valleys in response to frosts, decreed people should not move and the Australian Defence Force delivered food by helicopters. Following 1972, stories of a more severe highlands food shortage in 1941 began to be heard. A post-1972 examination of newspapers and administration reports found a probably even more severe event occurred in 1914. But the pre-1972 documentary evidence was fragmentary and excluded the highlands, where there was no colonial administration until after 1945.

The 1997 event was probably the most severe since 1914. At altitudes above 1700m, repeated frosts killed all sweet potato, the staple food. At lower altitudes, newly planted gardens failed because of a lack of rain and because streams used to make sago dried up. Taro growers were forced to remove plants from gardens and place them near large streams to maintain planting stock. Wildfires destroyed villages and killed people and pigs. Large areas of montane forest trees killed by fire in 1997 are still evident on highlands mountain ranges today. Forest fires disrupted long fallow shifting cultivation systems between the Fly River and the Sepik River (D. Jorgensen, pers. comm.) where rainfall averages as much as 8,000 mm per year. The Fly River became too shallow for shipping and Rouna hydro-power station was closed to preserve Port Moresby’s water supply.

By December 1997, national surveys of food and water found that over 260,000 people were eating ‘famine’ foods such as wild yams, tree leaves and banana roots. A further 980,000 were eating small amounts of poor quality garden food. Rural people survived by employing a number of strategies: eating ‘famine’ food; purchasing imported food with cash raised by selling off pigs or from savings; moving to places where food was available; moving to towns to stay with relatives who had wage-paying employment; and receiving rice, flour or cash from relatives in employment. Australia used ADF aircraft to reach 100,000 people without food, living in places only accessible by air. But, as a result, the numerous company and mission light aircraft that regularly flew to the same airstrips used by the ADF were grounded and a number were taken to Indonesian Papua to provide relief transport there.

In 1997 rainfall deficits were greatest furthest away from the Equator, but the impacts of the food shortages on people were greatest in the poorest parts of the country. People with wage employment, with relatives in employment or with adequate savings cared for themselves by purchasing imported food. The best evidence for this is rice import figures that show an increase of 66,000 tonnes in 1997. Of this additional rice, 76 per cent was sold through retail outlets. The balance was purchased by the Japanese, Australian and PNG governments and was delivered as relief food [pdf] (p. 155–63). Most people in PNG had the impression that Australia had rescued them from a catastrophe. In fact, they had largely saved themselves [pdf].

What is happening in PNG now?

The first signs that something was amiss in past PNG food shortages caused by El Niño were press reports of frosts. This year social media postings preceded press reports. Facebook postings, in particular, contain photographs of frosted gardens at Tambul and Kandep. Mobile phones are now widespread in rural areas. The National Agriculture Research Institute’s (NARI) Tambul station reported frosts on the nights of 19 and 26 July and 10, 11, 12, 13 and 14 August, a very similar pattern to 1997. In 1997 frosts continued into September and early October.

The 2015 frosts have had an immediate and spectacular impact on sweet potato and potato crops. Across whole valleys, fields of plants have died and gone brown although cabbages, peas, brassicas and wheat have survived. As they did in 1997, media reports describe deaths of infants and the aged killed by frost and an undefined general illness caused by eating food which has been exposed to the frost. These reports ignore that fact that deaths of infants and old people occur all the time in rural PNG and eating sweet potato harvested shortly after a frost does not cause sickness. Nevertheless, people face serious problems because a number of frosts some weeks apart will stop production for up to six months from what is a continuous planting and harvesting system.

For the next six months life will be tough in the frost-affected communities, but they will not passively wait for help to come to them. Some are reported to be already on the move to lower altitude valleys, where they maintain strong social relations, especially through marriage, as an insurance policy against frost. When the frosts cease and rainfall is again received, they will go back to replant their sweet potato gardens with vines from the lower valleys. Survival is not guaranteed, however. In 1997, widespread drought also severely reduced sweet potato production in the lower valleys to the extent that the additional refugee human and pig populations could not be adequately fed. If they had relatives in towns who were earning cash, many people moved into the towns, or received cash and food sent by urban relatives. The food supply situation in the lower valleys is not known at this time.

In August, media reports began to appear of low water levels in mainly highlands rivers, as well as the Fly and Sepik rivers. The Ok Tedi mine responded to the low Fly River by closing operations, a decision that was also related to low copper prices and a mine collapse. The drying of smaller streams is a particular problem for people who use sago as a staple because an ample supply of water is needed for leaching starch from the palm.

The national newspapers are reporting below average rainfall from many places, but there are no reports of widespread food shortages from lowlands villages yet. It needs to be borne in mind though that the communities which are least able to get themselves through a food shortage are isolated from roads and urban markets, and so cannot earn cash and buy imported food like rice to carry them through. Their very isolation also means their situation is less likely to be reported. A number of reports have been published of schools and health centres about to close because of lack of water for teachers and pupils. In 1997, the majority of schools had water tanks that were rusted out and empty. Teachers collected water from small streams nearby until they dried up, forcing them to leave. Recommendations that the tanks be replaced before the next drought have been ignored.

Government responses so far have been largely uncoordinated. At Kandep, the Leader of the Opposition in the national parliament, Don Polye, set up a committee chaired by an unnamed priest and gave it K2 million to buy rice, flour and other food. Enga and Simbu provinces have set up “trust accounts” and invited contributions. The Southern Highlands Governor has appealed for help from the national government, while the Enga Governor has urged Engans “not to panic”, because help is on the way. On 19 August the national government convened a Government Action Group in Port Moresby after which the Chief Secretary to Government, Sir Manasupe Zurenuoc, promised “immediate funding” on receipt of assessment reports from districts and provinces. NARI has been tasked to send a team into the frost-affected areas to make assessments. The Director of the National Disaster Centre (NDC) announced that NDC had no funds to deal with the situation, but that if it should receive some they would be properly accounted for.

What is to be done?

The present situation in the highlands needs urgent attention in the form of a proper assessment of food availability. A person with qualifications in agronomy and experience of the 1997 event should be appointed as a national drought coordinator. Teams of agriculturalists with experience of highlands food production systems and the impact of frosts on sweet potato should carry out assessments. A source of funds to provide aid, if it is required, should be identified and secured. Steps should be taken to prevent unjustified price rises of imported rice and wheat. As much as possible food, rather than cash, should be provided to MPs or public servants for distribution. The actual distribution of food should be overseen by the coordinator because in 1997 a lot of food was dumped on airstrips or small rural centres by MPs and people were left to walk long distances to collect it. Many old people were unable to make the journey to the distribution points. Lower level airlines and mission aviation can be used to distribute assistance to isolated places, rather than military helicopters. People should not be prevented from moving, and old people and very young children could be assisted to move. The Government of PNG should liaise with its regional partners such as Australia earlier rather than later, and regional partners should maintain close watching briefs in case weather conditions worsen, frosts continue to occur and rainfall is not received in December.

Bryant Allen is a Visiting Fellow in the State, Society & Governance in Melanesia (SSGM) Program at ANU. He wishes to acknowledge comments from Michael Bourke. This is an updated and expanded version of SSGM In Brief 2015/39, published on 14 August 2015.

Bryant Allen
Bryant Allen is an Honorary Associate Professor in the Department of Pacific Affairs at The Australian National University.