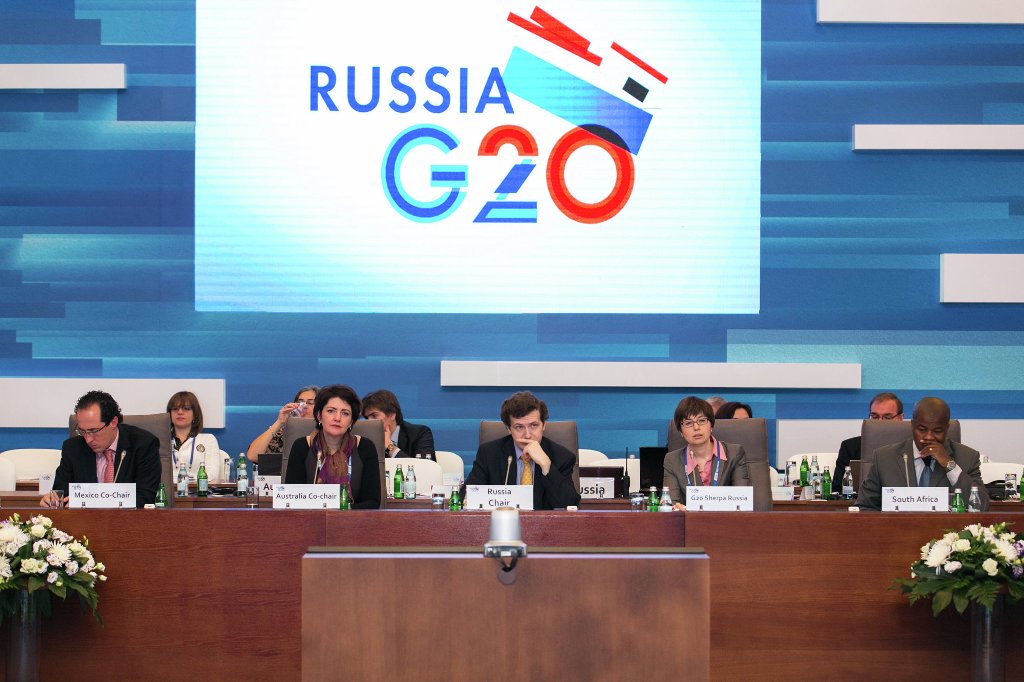 Foreign agents at the Bolshoi: what Australia can learn from the Russian Civil G20 process

Last month, Moscow played host to the Civil G20 Summit, the first official civil society summit to be held as part of an official program of G20 events. While civil society engagement has been a feature of the G20 since its rebirth as a leaders’ forum, until this year it had not been formalised in the G20 architecture – unlike engagement with business leaders and labour organisations (through the B20 and L20, respectively). This has meant that the level of NGO access to decision-makers and leaders has largely depended on the openness of the government holding the presidency in a particular year.  In many instances, what little access has been provided has been offered too late in the G20 year to afford influence. Broadly speaking, however, civil society engagement with the G20 seems to be steadily on the increase.

Few had held out much hope for the Russian presidency on this front. In fact, many NGOs had almost decided to sit out the Russian presidency and wait for Australia in 2014. So it was a surprise to most when Russia announced at its opening conference last December that its presidency was to be “characterised by outreach to civil society.” This was especially surprising in light of the passage the previous month of the Russian Foreign Agents Law, requiring any NGO that receives overseas funds to register as a “foreign agent” – analogous in Russian to the words traitor and spy. Foreign agent registration requires that the NGO be audited each year and that it not engage in “political activity.” This latter injunction is particularly problematic given that the word for “politics” and “policy” are the same in Russian, meaning that activity aimed at influencing policy can be considered “political activity” in the Russian context. As it became clear later in the year, this was to create a somewhat ludicrous situation where foreign funded NGOs invited by the Russian Government to be a part of its Civil G20 process were later declared to be “foreign agents” for having engaged in policy debate as part of this very process.

However, in December this conundrum had yet to become apparent and, while the issue festered beneath the surface, the focus instead was on how to respond to the invitation from the head of the Russian G20 Sherpa’s Office to submit civil society policy proposals to G20 working groups (“sherpas” are high-level government officials acting as proxies for leaders between summits). The Russian Civil G20 secretariat, comprising Russian NGOs, had presented an ambitious plan for coordinating civil society input into policy papers for submission to the G20. The plan proposed that there be six thematic groups (to which a seventh on financial architecture was later added) based largely on the work program of the G20 working groups on anti-corruption and development. The thematic groups would be tasked with collating policy calls from across civil society and developing policy papers for submission to the relevant G20 working group. Each thematic group would be co-chaired by a Russian and an international co-chair, and input would be received via a crowdsourcing website.

Nothing so ambitious had ever been attempted before. Further, it was clear that Russian NGOs had never undertaken something of this scale, and working in English presented a significant secondary challenge for many of them. As international civil society returned home, many of us wondered whether this “Bolshoi” (“big” in Russian) approach would prove too unwieldy.

Reflecting on these early days of the Russian Presidency and now looking back from the vantage point of last month’s Civil G20 Summit, it’s impressive how much the Russian Civil G20 secretariat achieved, particularly given the challenges with which they were presented. Just a couple of months after the December conference, 600 Russian NGOs across the country were “investigated” (some said “raided”) by Russian government authorities, around 25 were found to be “foreign agents” and almost 40 more were deemed to be potentially so if they acted in full accordance with their constitutions. The Russian Civil G20 Secretariat, nonetheless, soldiered on with implementing its policy coordination process. Co-chairs were appointed, information received through the crowdsourcing site, papers were developed and submitted to official G20 working groups, and meetings were even arranged between select co-chairs and G20 countries’ sherpas.

Last month’s Civil G20 Summit was the culmination of this policy development process. While the quality of the policy papers [pdf] issued by each of the seven thematic working groups was somewhat variable, there were some strong offerings, for example, in the areas of anti-corruption and in relation to the post-MDGs. This was likely due to the high level of interaction with the chairs of the relevant G20 working groups that each of the thematic groups enjoyed. The anti-corruption thematic group co-chairs, for example, had engaged in vigorous debate with the chair of the G20 Anti-Corruption Working Group on the merits of a civil society coordination mechanism to promote the participation of civil society in the fight against corruption, and this strengthened the final recommendation included in the Civil G20 paper on this theme. The Civil Taskforce’s paper on inequality was another notable policy paper generated by the Civil G20 process. This paper combined input from both academics and civil society members, and drew contributions from civil society representatives from all G20 members. Speaking to the steadily strengthening call across civil society for the G20’s growth to be shared equitably, the paper put forward a number of policy interventions to address growing inequality in the majority of G20 countries. The inequality narrative was a pervasive theme of the Civil G20 Summit and this paper is likely to become a platform for launching a strong inequality focus in the Australian C20 process.

The Civil G20 Summit itself was run on a Bolshoi scale. The Russian government paid for airfares and accommodation for numerous participants, enabling broad representation from across G20 nations. Russia also paid for an impressive Summit venue, complete with simultaneous translation, banners and uniformed staff, and generous catering. The Deputy Prime Minister who attended even responded positively to questions from the floor about the Foreign Agents Law, inviting Russian civil society to submit to him proposed amendments. Most impressively perhaps, President Putin met with a small NGO delegation for a 90-minute conversation that culminated in an agreement to reconsider implementation of the Foreign Agents Law.

For the price of around $2 million, the Russians had achieved more than any other presidency had ever offered in terms of real access to G20 policy-makers.

So what does this mean for Australia?

While the final result of this effort are yet to be seen in the form of the outcomes from the Leaders Summit, which will be held in St Petersburg on 5 and 6 September, some early lessons are beginning to emerge, along with some implications for Australia.

The speed with which the Russian Civil G20 secretariat needed to appoint co-chairs, collate information, develop papers and meet with G20 officials (within the space of four months), acted as a large obstacle to transparency. The Russian secretariat struggled to keep up regular communication with members of international civil society. Whilst the language barrier was likely another hurdle to regular communication with international civil society, the Russian secretariat’s inexperience with international consensus-building of this kind also led them to underestimate the amount of consultation and communication required. This was particularly apparent at the Summit itself, where the Russians had only allocated 90 minutes (the morning after an elaborate “cultural event” the night before) to negotiate the outcomes document.

The seven thematic groups, plus an additional Civil Taskforce on equity, presented a heavy workload that was almost unmanageable for the secretariat. The varying quality of the proposals that emerged reflected this unwieldy process, with the highest quality products being ones where individual co-chairs had dedicated significant amounts of personal time. There were also concerns about the selection of thematic group co-chairs. In one particularly dramatic case, a co-chair appointed from the Russian business community could not agree with the view of most of his civil society colleagues, so two papers had to be presented to reflect the diverging views.

Despite all this, it’s important to remember that the Russian Civil G20 was the first time such an ambitious, and ordered, approach to civil society engagement has been attempted. Further, international civil society is now looking to the Australian presidency to build upon this first attempt and has extremely high expectations.

These expectations will be just one of the challenges facing the newly appointed Australian “C20 Steering Committee.” This Committee has been tasked with running a policy coordination process that will identify key policy areas of focus and facilitate input from across the broad spectrum of Australian civil society, and without the $2 million investment that civil society enjoyed under the Russian presidency.

A key challenge for civil society itself will be to identify the policy areas on which the Australian C20 should focus. The Russian “pilot” would seem to suggest that eight areas of work are too burdensome. However, narrowing these down will be a delicate task requiring diplomatic consultation, and one made more difficult by the absence of a clear agenda for the G20 Development Working Group (a new, multi-year agenda is supposed to be released in St Petersburg) as well as uncertainty about Australian government priorities (most likely to be announced this December). In addition, it might be questioned whether the policy priorities of civil society should be confined to areas covered by just one or two G20 working groups.  The “tyranny of distance” will be another complicating factor that will require imaginative, and mostly likely, technological solutions.

The C20 Steering Committee will also need to address the issues of perceived lack of transparency in the Russian process, including around how co-chairs were appointed and papers finalised. Systems will need to be put in place for ensuring opportunities for participation are well advertised and updates regularly communicated. Support for participation by civil society representatives from developing countries will also need to be considered, particularly for the C20 Summit, which is likely to take place in July or August next year.

The C20 Steering Committee held its first meeting at the end of July. With just under five months before the Australian presidency begins, there is much to do. Fortunately, Australia has the Russian experience to draw upon, which, although marred by the imposition of constraints on domestic civil society organisations, has nonetheless raised the bar. Now it’s up to Australia to take a further step and institutionalise the C20 into the G20 architecture by running a professional program of policy dialogue that demonstrates the value that civil society engagement brings to G20 policy development.  Equally, it’s up to the C20 Steering Committee to develop focused and relevant policy input that has a real prospect of influencing debate and outcomes.