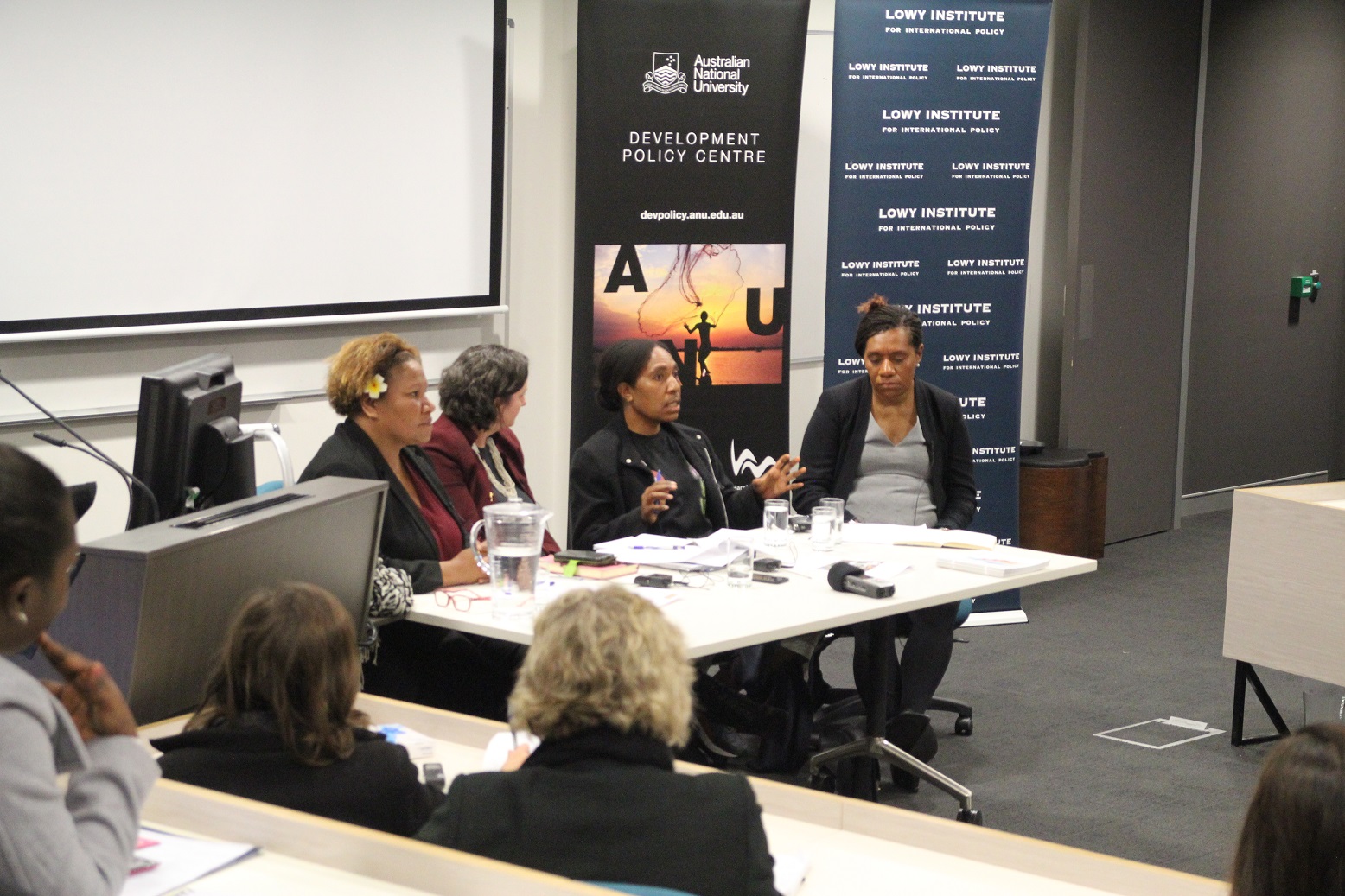 There is rarely happy news when it comes to discussing the troubling gender-based violence (GBV) epidemic in Papua New Guinea. But two recent events, co-hosted by Devpolicy in Canberra and the Lowy Institute in Sydney, highlighted that change is happening, that there are solutions and innovative approaches emerging, and that the issue is receiving increasing attention from government, civil society and the private sector.

The panels brought together Anna Solomon, Secretary of the PNG Department for Community Development and Religion; Denga Ilave, Operations Manager for Femili PNG; Kymberley Kepore, Chief Executive Officer of the Oil Search Foundation; and Kevin Byrne, Deputy Chair of the PNG Business Coalition for Women (in Sydney only). In Canberra, the discussion was chaired by Sally Moyle of DFAT, and in Sydney, by Kath Taplin of Femili PNG.

The discussions were wide-ranging, but several shared themes emerged, which I will attempt to summarise in this post. For the full discussions, listen to the podcasts of the Canberra and Sydney events.

The role of the private sector

The real growth in interest and understanding of GBV among PNG business that has emerged in the past few years was praised by all of the panelists as a significant and positive development in the national conversation on violence.

Kevin Byrne outlined some of the initiatives being undertaken by the PNG Business Coalition for Women, such as education, leadership and workplace policy programs, which aim to increase respect and opportunities for PNG women at work and in the community.

“It’s about trying to inculcate in the businesses of PNG, and the overall community, a leadership role in the equality argument and the respect argument … We try to meld that debate into a workplace context, and provide workplaces with the tools so they can bring policies into their workplaces on the right things to do on equality.” – Kevin Byrne

“Social success is critical to business success,” says Kymberley Kepore, and while business has long recognised the impact of GBV, she believes the development of such tools has allowed them to really engage.

“I think what has happened is that [businesses] always recognised the impact of family and sexual violence, and the cost to social enterprise … but they had isolated approaches that really depended on very specific individual circumstances … they didn’t have the language or tools for a corporate response … We’re at the precipice of something really exciting and interesting.” – Kymberley Kepore

Even at a local level, business is showing a real interest, which provides great hope for working women, who are often left with a choice between keeping their jobs and leaving abusive relationships.

“In Lae, where I’m working, we’re engaging and extending our partnership with business. I see their openness, and that they’re welcoming the idea. When we write letters to them saying we want to raise awareness, they’re organising their staff to do this. This is a way forward. Most of our women [clients], are caught in between. They are deciding whether to keep their job, or seek the services that they need.” – Denga Ilave

Beyond the private sector’s welcome engagement, Denga Ilave highlighted the growing awareness of the issue of GBV, and the growing number of actors in the GBV space – NGOs, government agencies, the community sector, faith-based organisations, and more. With this growth comes the challenge of coordination.

“We need all these actors to work together. Coordination plays a very important role in ensuring that actors are playing the roles that they should be in terms of delivering services.” – Denga Ilave

Secretary Solomon said that attempts have been made to better understand “who is working on what” on GBV in PNG, through the establishment of a gender forum headed by the Minister for Community Development and the head of the UN in PNG. She said that coordination is crucial for the sustainability of donor investments in GBV, and achieving this has been a challenge in the past for government.

“PNG is a country where you really need that coordinated approach for things to work. You must. Over the years … when [development] partners, other NGOs, or government comes in, it is like you are paddling in different canoes to the same village. One comes and goes, the other one comes and goes. And we are not able to go in and assess the impact of what program may have just gone in or gone out. And so that coordinated approach at the national level, to the provincial level, to the district level and to villages, that is what sustainability will be about.” – Secretary Anna Solomon

The need for context-appropriate responses, particularly contextually-appropriate communications, was highlighted by all of the panelists.

“How do you talk to a country where the majority, 80 percent, live in the villages? How do you speak to them about gender equality, addressing gender-based violence? How do you tell them that discipline or corporal punishment is child abuse? We are getting a lot of assistance, but we need to see what fits Papua New Guinea well…. The challenge is breaking those social norms.” – Secretary Anna Solomon

Kymberley identified the breakdown of a sense of place and community in PNG society, due to issues such as urbanisation and economic pressures, as being part of the recent growth in gender violence.

“The ability of our society to develop new ways of coping with new issues hasn’t caught up with the way things are changing, and things in PNG are changing just as fast as anywhere else in the world… But I’m extremely encouraged by the incredible positivity on the issue now — for me it comes down to taking ownership of the issue, and before it was really ‘somebody else’s problem’, if it wasn’t your business, you didn’t make it your business.” – Kymberley Kepore

Cultural and contextual awareness is also extremely important for frontline workers, often dealing with highly sensitive issues. As an example, Denga spoke about how Femili PNG’s case conferencing approach and partnerships capitalise on the communal decision-making culture in PNG.

“If there are challenges that we encounter [in devising a solution for a client] we call case conferences, and I think it is part of our culture. It’s a communal society. When there is a problem, we come together, share ideas together, help each other. We live in extended families. So capitalising on that part of our culture, we bring the stakeholders together and discuss how we can work together on that particular case and delegate responsibilities accordingly to each partner, and find a solution for the women and children.” – Denga Ilave

While there are clearly some encouraging changes, there is also a long way to go. The panelists identified a number of areas for improvement or for future focus. These included: building coordination at all levels, strengthening service delivery (particularly focusing on the shortage of trained counsellors in the country, and services and programs for perpetrators), and ensuring projects or services are locally-led and contextually-appropriate. They saw potential to build on the positives of PNG’s social fabric and traditions to achieve change.

Ashlee Betteridge is a Research Officer at the Development Policy Centre. She also provides pro-bono support to Femili PNG.