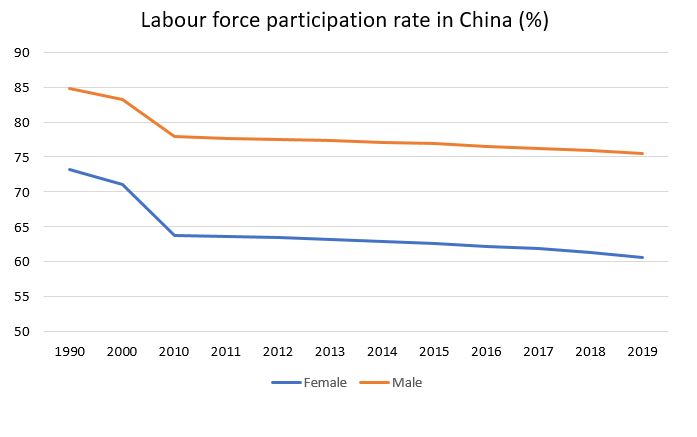 Mao Zedong’s famous phrase “Chinese women hold up half of the sky” symbolises China’s commitment to gender equality. When China, under a centrally planned system, was among one of the poorest countries in the world, its achievements for women in human development outcome indicators and gender equality surpassed many middle-income countries. Half a century later, China’s rise as a global economic power has been accompanied by major social, demographic and structural transformations.

A key question is how women have fared in the labour market in this process. In our paper published in the most recent issue of Asia and the Pacific Policy Studies, we examine trends in key dimensions of women’s economic opportunities, relative to men: whether and where they work, how much they earn, and whether they are represented in management and leadership. We included a special focus on women migrants, given the scale of rural-urban migration in recent decades. Overall, the results are worrying. This blog highlights some of the most striking results – and updates them in a couple of places.

There has been a marked decline in women’s labour force participation during four decades of high economic growth, in contrast to trends observed in most of the rest of the world. The share of working-age women in the labour force fell from 73% in 1990 to 60% in 2019; rates for men also declined over the same period, as shown in Figure 1. We present evidence that women have been adversely affected by the withdrawal of state support for child care, while the rapid ageing of the population creates additional challenges given prevailing gender norms around who is responsible for care. At the same time, falling labour force participation for young women (aged 15–25 years) has been associated with increasing tertiary completion rates (in 2017, the share of working-age women and men with university education or above reached 14%, compared with 2% in 2010). But have educational gains expanded women’s occupation choices and earnings?

Around the world, women and men tend to be concentrated into specific occupations, with women more likely engaged in lower paid jobs. We undertook new analysis of four waves of census data (1982, 1990, 2000, and 2010) and the 2016 Labour Force Survey to examine the situation in China. Several points emerge, revealing both continuity and change:

China’s rapid growth and structural transformation have reshaped the sectoral distribution of employment and boosted demand for high-skilled jobs in the services sector, as shown in the shift of employment by sector/skill level between 2013 and 2017 for all workers in Figure 2. Women with an urban Hukou (local residence permit) appeared to be gaining. Women were more concentrated in high-skilled service sector jobs than men, according to the 2016 Labour Force Survey, but over 60% of female rural–urban migrants were in low-skilled service jobs.

Widening gender wage gaps. A number of empirical studies reveal a widening gender wage gap over time, from 16%–20% in the 1980s to around 30%–40% in the 2010s for full-time salary workers, which regression analysis suggests is largely attributable to gender discrimination. Moreover the “motherhood penalty” is substantial: in 2005 women with children earned about 36% less than single women.

Larger constraints face female migrant workers. Migrants in China have been concentrated in low-skilled services where labour standards and poor working conditions are prevalent. While the system of household registration used in China has been liberalised, workers without a local residence permit still face disadvantages, which may also be traced to their lower education. Examining data on their hourly wage and access to social protection from the 2016 Labour Force Survey, for example, we find that gender gaps in hourly wages are much larger for migrant workers (24%) compared with local workers with Hukou (14%). And while close to gender parity in access to social protection has been achieved among workers with Hukou at high levels, fewer than 28% of female migrant workers had access to either pensions or health insurance, as shown in Table 1.

Table 1: Wage gaps and access to social protection for workers with and without Hukou, 2016

Source: Author estimates based on the 2016 Labour Force Survey

In sum, China’s transition from a poor, socialist, planned economy to an economic powerhouse appears to have eroded some earlier national achievements in gender equality. Rapid economic growth has not alleviated discrimination against women rooted in cultural and social norms. This is reflected in falling female labour force participation, widening gender wage gaps, and significant underrepresentation of women in business leadership and management. Many female workers, in particular rural-urban migrants employed in China’s fast-growing service sector, face widespread discrimination, violations of labour standards, and a lack of social protection. The implementation of existing laws designed to protect and support women clearly needs to improve.

Looking ahead, efforts in both the public and private sectors are needed to provide support for care of the elderly and children, to enforce labour laws and expand the coverage of social protection in order to build on China’s successes of the past and learn from global experience to improve gender equality over time.

The piece is based on an article in the Asia and the Pacific Policy Studies journal, “How women have fared in the labour market with China’s rise as a global economic power” by Jeni Klugman and Limin Wang. All articles in the journal are free to read and download.

Limin Wang
Limin Wang is a Research Associate at the London School of Economics.

Meiyan Wang
Meiyan Wang is a Professor at the Institute of Population and Labour Economics at the Chinese Academy of Social Sciences.