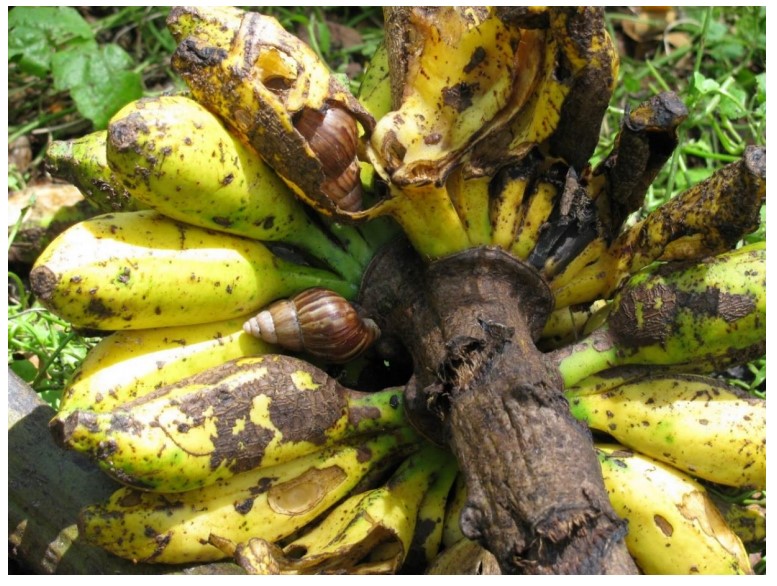 Giant African Snails (GAS; Achtatina fulica), are a huge, but largely ignored, development issue in Solomon Islands. Native to Africa, these invasive snails are voracious eaters with an extremely high reproductive capacity – producing some 1800 eggs annually throughout their 3-5 year lifespan – and have exploded in numbers beyond control in the Honiara hinterland of northern Guadalcanal. GAS can tolerate a wide range of environmental conditions, and incursions into Auki, Small Malaita, and Gizo have recently been reported. Most critically, they are known to eat hundreds of plant species, including most vegetables and fruits grown in Solomon Islands as food crops. 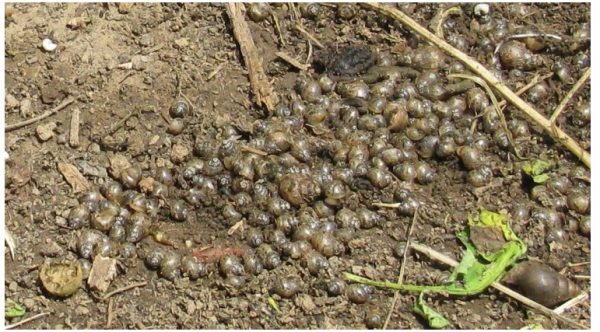 GAS were introduced to Solomon Islands in 2006 – probably from Malaysian logging barges at the Ranadi industrial area in east Honiara (an area of very high infestation now; there is even a local soccer team called the KG Snails!). Spreading very rapidly across Honiara’s urban and peri-urban areas, both naturally and through other means (particularly hitching on the movement of machinery), GAS quickly exceeded Biosecurity Solomon Islands’ (BSI) budget and capacity to control. For example, BSI’s total annual budget for pest control is SBD 2 million (AUD 317,000), whereas their estimate for the effective management of GAS alone is around SBD 10 million (AUD 1.6 million) per annum.

Control of the pest is thus largely left to households – a daily and time-consuming task involving hand collection and destroying through various methods (including drowning, burning, crushing, and salting). The focus of BSI’s efforts is on awareness and the provision of rapidly exhausted supplies of free bait for the public. Some hope and efforts, perhaps forlorn, have been directed at the use of predatory flatworms for control (FAO reports that the snail eating flatworm Platydemos manokwari, native to Australia and New Guinea and possibly Solomon Islands, has controlled GAS in Guam, the Philippines, and the Maldives – although the flatworm is also highly invasive and has caused the decline of native snails elsewhere). The flatworm has been found around Honiara, but has yet to show any appreciable impact on GAS or the garden destruction they cause. 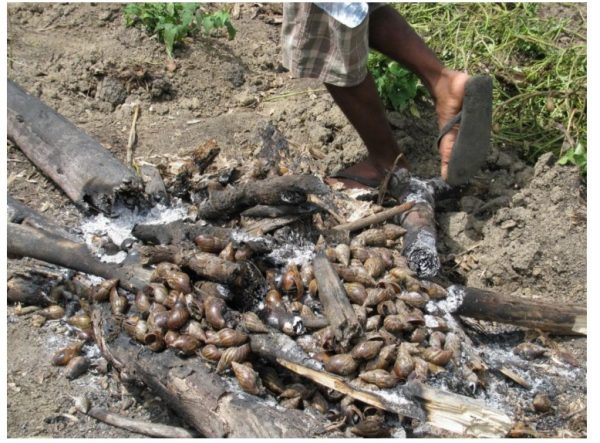 Dean’s PhD research looked at the livelihood impacts of GAS (and also Little Fire Ants; another invasive alien species) in Solomon Islands.[i] He found that GAS were causing significant impacts on both subsistence and cash crop farming. In many cases food crops were being almost entirely destroyed. In some cases, garden sizes were reduced by 80–90% in an attempt to manage GAS, affecting household subsistence and earning. Dean found that important cash crops, such as cocoa, have been substantially diminished in areas of snail infestation. People have responded by moving their gardens to avoid GAS; but some have run out of snail-free places to move to. Communities report feeling overwhelmed by GAS numbers and also of being abandoned by the government, believing not enough is being done to address the issue. The presence of GAS also creates a significant labour burden – often falling on women – where control can take many hours of the day, as constant monitoring of gardens is required. 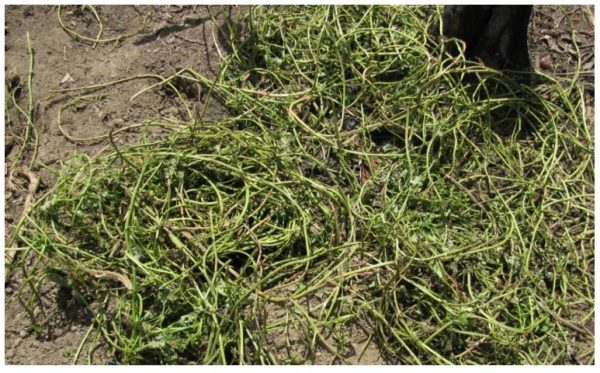 A vignette from Dean’s research exemplifies the livelihood impacts of GAS:

Situated just metres off the highway in a rural area east of Honiara, sits a group of three small houses. The homes belong to Donald and the other nine members of his extended family. Donald moved here with his family in 2001 and established gardens in which they grew a wide range of crops, which they used to feed the household and to sell in the central market in Honiara. Donald also obtained a labouring job which provided additional income for the family. All that changed however in 2007 when A. fulica arrived in their area. Since A. fulica arrived they no longer make gardens and grow their own food, because the snails eat all the crops. Although they tried to control it initially, snail numbers just kept on increasing and the problem became too hard for them. Now, according to Donald, every evening the snails cover the area around their houses like stones. They go into the houses and eat any food stored there, such as bananas and sweet potato. The snails also foul the houses with their droppings and slime trails, creating more work for his daughters who are responsible for keeping the houses clean. With no food or income from the garden the family has set up a roadside stall from which they sell betel nut that they buy from others and on sell. On a good day they make around SBD 100 [AUD 17] which they use to buy food to feed the entire family. The money Donald earns from his job helps but it is mainly used to cover other expenses like school fees. While it is a struggle, he has been able to keep the one school-aged child in school. What will happen when the others reach school age, he does not know. The widespread distribution of the snails also means that Donald is unable to call on wantok for support. They all face the same problem, he tells me. No one has enough to share. As we wrap up our interview, Donald reflects that what they have experienced with A. fulica has been really challenging for them; that his family has fallen on hard times because of it. He admits that sometimes he just wants to give up; but knows that he has to struggle on to survive and to support the family.

Donald’s story is likely mirrored by hundreds of households across northern Guadalcanal. Assistance is needed. However, despite widespread public concern about the substantial impact of GAS (and other invasive species such as the coconut rhinoceros beetle) on key subsistence and cash crops, the issue has not been prioritised by the Solomon Islands Government (SIG). SIG’s National Development Strategy 2016-2035, for example, makes no specific reference to GAS or wider objectives around control of invasive species, and BSI’s resources remain insufficient to control GAS. SIG’s major development partners – including Australia and New Zealand – have also been slow to recognise the clear threats to livelihoods and food security posed by the GAS and invasive species. The issue has received surprisingly little priority or resources given the fact that smallholder agriculture in Solomon Islands is estimated to account for at least 40% of GDP.

It is clear that Solomon Islands was unprepared for the destructive arrival of GAS. A legislative framework supported by donors has now been put in place – including the National Biodiversity Strategy Action Plan (2009), the Agriculture Policy (2010–2015), and the National Biosafety Framework (2012), which all recommended the development of pest eradication plans, and the drafting of the new Biosecurity Act 2013 (enacted in March 2015). However, the new framework has yet to result in any actual ‘on ground’ actions to control GAS or other invasive species. Eradication plans are incomplete and unfunded, and resources allocated just do not match the scale of the threat.

Luke Kiddle is a development practitioner and researcher. Dean Stronge investigated the livelihood impacts of invasive species in Solomon Islands for his PhD from Massey University’s Institute of Development Studies. Michael Pennay is an Australian ecologist who has lived in the Solomon Islands for the past three years, where he worked as an agricultural development officer at Tetere correctional farm.

Dean Stronge
Dean Stronge investigated the livelihood impacts of invasive species in the Solomon Islands for his PhD from Massey University’s Institute of Development Studies. Prior to conducting his PhD, Dean spent 17 years working for the New Zealand Department of Conservation as a technical advisor for invasive species issues in New Zealand.

Michael Pennay
Michael is an Australian ecologist who has lived in the Solomon Islands for the past 3 years, where he worked as agricultural development officer at Tetere correctional farm. He investigated Solomon Islands legal and policy frameworks dealing with invasive species for his Master of Environmental Law at Australian National University.