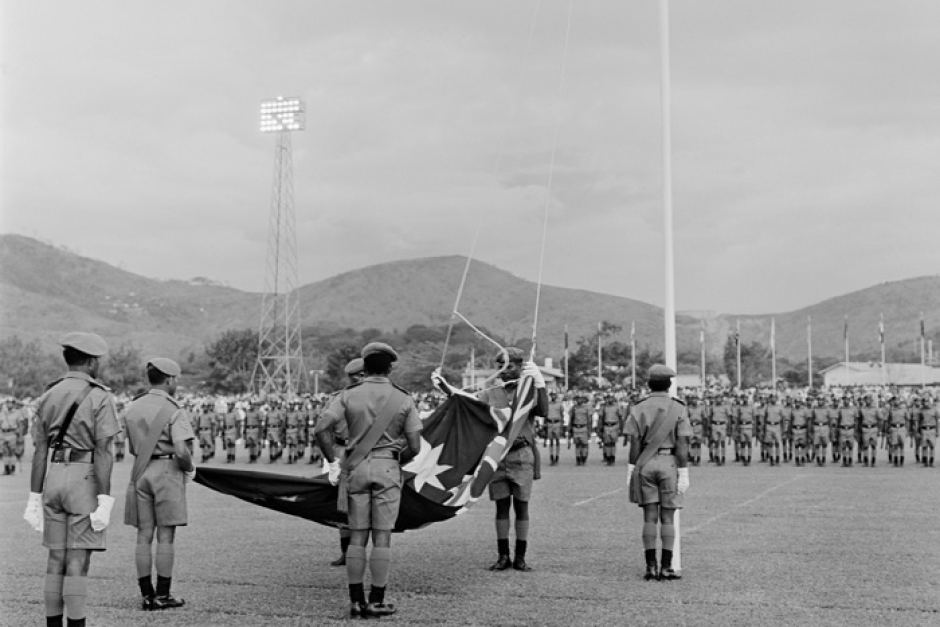 Governance, ethics and leadership in Papua New Guinea – a personal perspective: part one

I want to establish from the outset the foundation of experiences from which I am speaking on the important subjects of governance, ethics and leadership in Papua New Guinea (PNG). This paper revolves around personal and practical experiences acquired over the years in my various capacities: firstly as a public servant and secondly as a private citizen, and it is a privilege to share them with you.

I would like to tell you a story from my childhood, growing up in a village from the late ‘40s to the ‘50s. I can recall one of many lessons in compliance I received from my father. On our family coconut plantation, I was collecting dry coconuts lying underneath our coconut trees. Dad identified that some of the dry coconuts had fallen from the neighbour’s coconut trees and rolled over to our side of the land boundary. He instructed me to throw the coconuts back over to the neighbour’s land, which I did. It was then that it dawned on me that in the past I may have inadvertently collected the neighbour’s coconuts, and since that day, every time I went back to collect dry coconuts, I made sure that I returned any of our neighbour’s coconuts that had rolled onto our side of the land boundary.

A huge challenge for many leaders in our region is how to deal with customs and cultural obligations that sometimes appear to conflict with laws and administrative processes. This is not an easy task, as in many cases traditional values do hinder or stand in the way of progress, development and prosperity. On 16 September 1975, Papua New Guinea became an inde­pendent sovereign state and adopted its national constitution. Most countries in the Pacific have inherited in one way or another systems of government similar to that in force in PNG. I regard PNG as a miracle, with over 800 different peoples and language groups coming together to forge a common identity as defined by the constitution at independence.

The constitution has served the independent sovereign state of PNG well for more than 42 years so far, as an anchor. As long as the constitution is safe, democracy is safe. Since the United Nations passed the Universal Declaration of Human Rights following World War II, many countries have enshrined the principles of human rights and protection in their constitutions, and PNG is no exception.

The prelude to our constitution sets out a series of National Goals and Directive Principles, the second of which is equality and participation, and Section 55 of the constitution is headed ‘Equality of citizens’. This is perhaps one of the most profound declarations of the constitution, given the fact that PNG is generally a male-dominated society. These provisions declare in unequivocal terms that every citizen, whether male or female, is equal. Government services, such as education and health, must be equally accessible by all citizens without differentiation by colour, sex or creed.

The main difficulty with provisions such as these is their incompatibility with age-old culture in parts of the country where custom plays a vital role in the sustenance of communities. In communities where custom is strong and there is very little accessibility to the outside world, or where there has been a deterioration in government services, the prevalence of abuse by males against women and children is high. This practical reality is not, however, only confined to rural communities. In towns and cities, gender inequality is quite visible, especially among the affluent Papua New Guineans and their grassroots brothers and sisters.

My personal intuition over the years, as a practitioner and staunch supporter of constitutional democracy, is that democracy will not work effectively without a robust constitutional regime or rule of law to enable it to protect and assure all democratic institutions in the performance of lawful duties and functions without fear or favour. It is a fundamental requirement, particularly in developing democracies, to establish strong institutions — practiced and accepted beliefs — as well as legislature, executive and judiciary, to uphold, guard and maintain democracy and the rule of law. Weak and ineffective institutions create fragile environments prone to unchecked infiltration of criminal activities. These can become entrenched and out of control, contributing to instability and widespread corruption of all forms, and resulting in a collapse of order.

Such situations inevitably drive governments to resort to authoritarian forms of administration and the application of excessive force and violence to supress conflict and rule-breaking. In some of our regions, this comes in the usual form of declarations of a state of emergency. I simply put it that when human skills are in short supply or exhausted in government, the easy way out in resolving crises and challenges is the application of draconian measures.

Most or all of the practicing leaders in various walks of life are immediately caught between the competing demands of cultural and other imperatives on one hand and the constitution and rule of law imperative on the other when making important decisions. Leaders often find themselves bombarded by such pressing demands and influencing factors, which pull them in opposite directions. This is a serious challenge confronting many, if not all, leaders today, who must choose between the two — you cannot have it both ways. For good governance, leadership must be decisive, acute and on principle driven by ethics and rule of law. The Holy Bible, the leading textbook on morals and ethics, is widely read, and no doubt has influence on the behaviour of leadership to some degree. In some coun­tries, a leadership code of ethics has been enacted as law to regulate the conduct of leaders.

What is going to fix these problems? The rule of law, the constitution, democracy and ethical leadership are all important. In the end, there is no simple single answer to this question, but I have found myself engaging with the topic of ethical leadership. In part two of this post, I will recall several difficult situations in which I have found myself throughout my career and how I decided to handle them.

This piece, part one of a two-part series, is based on a speech given on 28 May 2018 at the Australia Awards Women’s Leadership Initiative at the Parliament of New South Wales in Sydney, Australia, and was originally published as Department of Pacific Affairs (DPA) in brief 2018/32. See part two here.

Ila Geno
Chief Ila Geno is a former Chief Ombudsman of PNG. He has also served as the country’s Chair of the Public Service Commission and Police Commissioner. After retiring from the public service he formed a new political party — the PNG Constitutional Democratic Party — and stood unsuccessfully in the 2017 national elections.