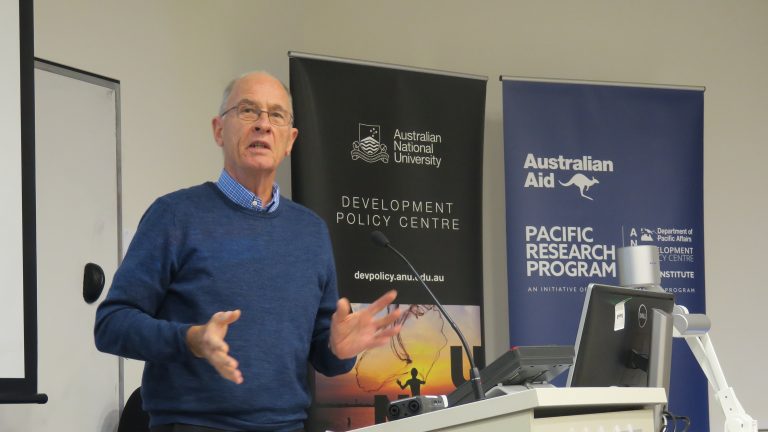 Work has recently started on the third phase of DFAT’s Governance for Growth (GfG) Program in Vanuatu. The Program will run for at least 15 years, suggesting that both DFAT and the Government of Vanuatu have chosen to stick with what they see as being a good thing.

Why would they judge the Program this way? Two recent reviews of GfG, which looked at the what and how of the Program, explain why it has been considered to be successful and worth continuing.

The development of GfG drew on lessons learned from earlier, less than successful, ADB-led attempts to support broad ranging reforms in a time of economic stagnation, fiscal crisis, political instability and social unrest. GfG was designed to act as a broker of activities supporting locally driven reforms, working in partnership with key stakeholders in Government and other interested parties on problem analysis and policy development. But unlike other facilities that are managed by contractors, GfG has been managed directly by DFAT staff co-located in the Office of the Prime Minister.

Over the last 10 years, GfG has supported the government as it has pursued policy and institutional initiatives aimed at generating broad based and equitable economic growth and at improving delivery of public services.

GfG’s work on growth has drawn on extensive analytical work on factors determining Vanuatu’s growth potential, such as the inherent disadvantages created by geography and size, the political economy of reform, and the way that custom and culture interact with formal legal and institutional structures to shape governance. Taking account of these factors, GfG has focused on issues within the scope of conventional social and economic policy such as infrastructure and utility services, and the enabling environment for private sector development.

GfG’s work on service delivery has focused on strengthening the building blocks of the public finance management system, while supporting de-concentration of expenditure management.

There were some dry wells and failures to launch. Alongside the successes, GfG has also worked in areas where it has had limited traction on change – SOE reform is one clear example, particularly in the aviation services sector – and improving the mix, allocation and appropriateness of public investment. Although it has done important work on the enabling environment for the private sector, it has not been able to facilitate much of an improvement in the basis for public-private sector consultation, a critical ingredient for a growth-focused program. In recent years, its interactions beyond the central agencies have diminished, in particular its role in coordinating the PFM effort of other areas of the aid program.

GfG was ‘thinking and working politically’ before the term entered the development practitioners’ lexicon.

All programs get a bit sclerotic with age, and GfG is no exception. The impetus to refresh relationships, and to continue to explore new opportunities, can get constrained. A downside of not employing a managing contractor while using local systems is that the GfG team has to spend a lot of time assisting with activity management at the expense of expanding relationships. Because of its positioning and flexibility, the program has from time to time been tasked with management of more transactional elements of the Australian aid program, which along with helping with the Cyclone Pam recovery effort, has diverted effort and resources away from the core mandate of GfG. Budget cuts have impacted on the ability of the program to support more forward-looking research and analytical work.

This said, GfG is a ‘jewel in the crown’ for Australian support to economic reform and service delivery in the Pacific, and its continuation into a third phase makes very good sense.

This blog draws on presentations made at a Development Policy Centre panel session on 9 November, hosted as part of the Pacific Research Program which is supported by the Australian aid program.

Bob Warner
Bob Warner has worked at the Productivity Commission, the World Bank, the Centre for International Economics and the Crawford School of Public Policy (where he was Director Pacific Research Partnerships with for the Asia and the Pacific Policy Studies Journal). He has been a long term advisor in Bangladesh and Zimbabwe, and a short term advisor and consultant to governments in a number of developing countries, particularly in South East Asia and the Pacific.