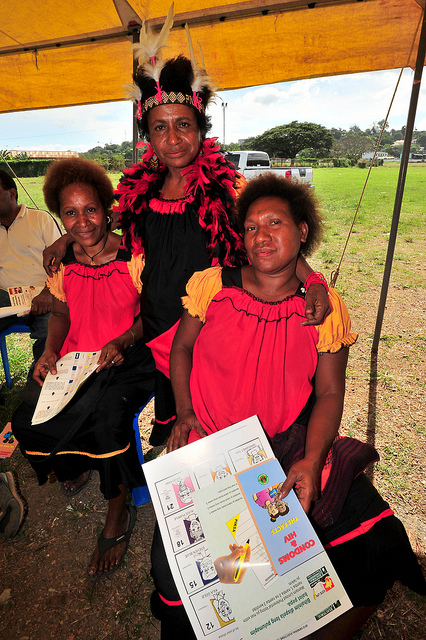 Women are badly under-represented in Papua New Guinea’s parliament. There are only three female MPs at present (out of 111), and this is an improvement. The previous two parliaments had only one woman MP. One hope held by some commentators was that Limited Preferential Voting (LPV) would help women candidates. Clearly — given results in 2012 and 2007 — LPV hasn’t been a game changer, but this doesn’t mean it hasn’t helped at all. Even small improvements could change the gender make-up of parliament over time. In this post I’m going to use data from the PNG Election Results Database (augmented with additional information on preference allocations) to have a look at the impact of LPV on women candidates in 2012. (I don’t have the necessary data for 2007.)

I’ve heard several arguments about how LPV might help women. One is that it might enable women candidates to pick up the second and third preference votes of women voters, who would like to vote for them, but who couldn’t do so if they had only one vote, as this vote is controlled by male relatives. Another argument is that women candidates may be able to offset the financial disadvantage they have in elections by being able to win second and third preference votes, even if they can’t buy people’s first preferences. A final possibility is that preferential voting may open up a range of new strategic pathways to victory. This could help candidates of both genders, but might benefit women more, simply because they can’t win using traditional methods.

All of these are possible, but they are only possibilities. Indeed, I have to confess that — having written previously on LPV’s limited impact on election results — I started this analysis sceptically. If LPV hasn’t changed overall election outcomes much, it didn’t seem likely it would have helped women.

Indeed, my first finding suggests that LPV hasn’t helped most women candidates. It comes from my analysis of the rankings of women candidates in 2012. (Those who I had data for: 117 out of 135.) In this analysis, I looked at whether women’s rankings improved or got worse as second and third preference votes were allocated. To do this I calculated the rank of each individual women candidate after first preferences had been counted. I then subtracted their rank at the final count from it (if they made it to the final count; otherwise, I used their rank when they were eliminated). The result was a measure of how much their ranking had changed as second and third preference votes were counted. A positive number meant they improved their standing as preferences were reallocated. The chart below is a histogram of the results. The x-axis shows rank change. The y-axis shows the percentage of women candidates whose ranks changed by that amount. 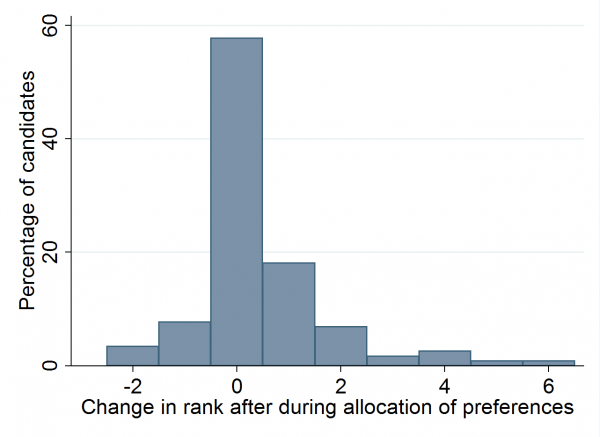 As the bar above zero shows, nearly 60 per cent of the women candidates didn’t change ranks at all. This wasn’t because they were eliminated straight away. Only three women I have data for were eliminated after first preferences. It also wasn’t because women didn’t win any votes from second and third preferences (almost 90 per cent did). It’s because, although the typical woman did gain votes, her male competitors did so as well, meaning most women ended up in the same place they started. LPV did not change the electoral fortunes of the typical woman candidate in 2012.

And yet, although LPV doesn’t appear to have helped most women candidates, casting one’s eyes along the x-axis shows that the rankings of a small number of women improved considerably. Improvements weren’t always because women gained lots of votes (some races were tight and it only took a few votes to improve one’s standing). However, all of the women whose ranking improved by more than one increased their vote tally by at least a third and almost half of them more than doubled it as preferences were allocated. Two women — Loujaya Toni and Julie Soso — gained enough to win. (One other, Dellilah Gore, was in front from the start.) Most women did not gain much from LPV, but some did. 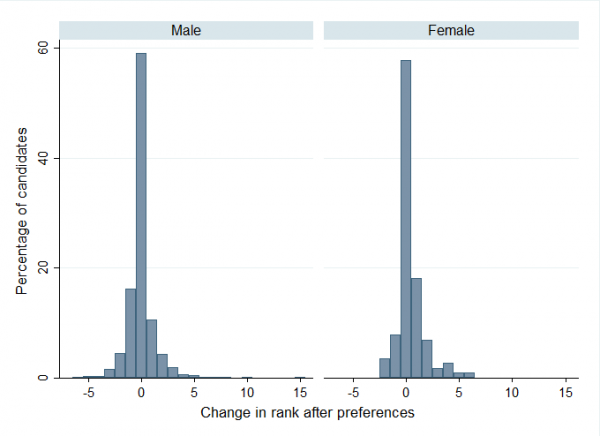 To be clear, the difference is small, and not many women gained substantially from LPV. And 2012 is just one election. The picture may look different after 2017. Yet, the 2012 results are intriguing. They certainly point to further research questions. Why did some women gain when most did not? Was it chance? Was it something unique about them as people? Was it the nature of the places they contested? Are there lessons other women could draw upon? These questions all warrant further research. In the meantime, it would be unwise, as I almost did, to write off LPV’s potential to help women candidates. It is no game changer, but it may be useful.