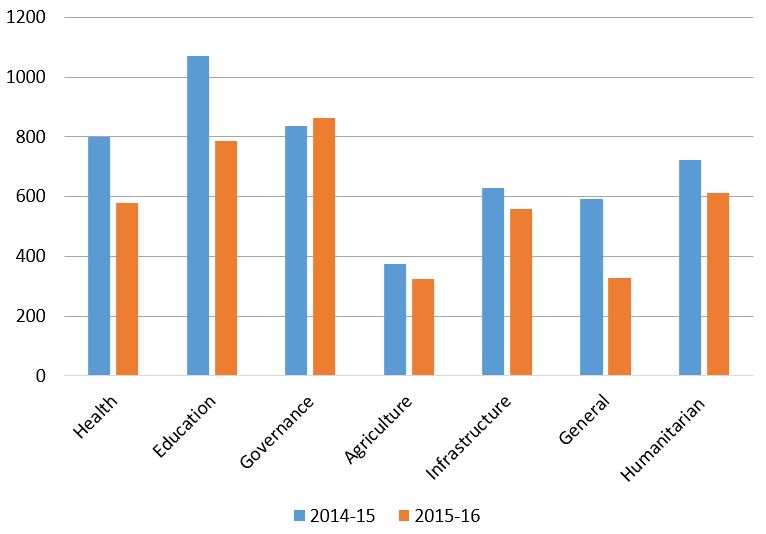 As we gear up for a forecast $200-million-plus of aid cuts in today’s budget, it is timely to look back at last year’s aid cuts, and where they fell. After all, it was the largest cut in aid ever: 20% or $1 billion. The 2015-16 budget was clear where the cuts would fall geographically – the Pacific was to be protected, while Asia and Africa were to bear the brunt – but said very little about on which sectors they would fall. This was left up to each country and region. New data released by the Department of Foreign Affairs and Trade (DFAT) give some insight into how those decisions were made. The figure below summarizes the key results – the notes at the end of this post explains how I have derived these numbers.

The largest cut in absolute terms is to education, which falls by $286 million or 27%. Once referred to as the aid program’s “flagship” sector, education no longer deserves that moniker, at least if measured by volume. How the education cuts have been distributed across scholarships and national education investments is not yet clear. Only very aggregate data is available so far for 2015-16.

The second largest cut in absolute terms, and the largest in relative terms, is to the residual, general category. It is hard to say much about this fairly volatile expenditure category.

The third largest cut in absolute terms is to health, which falls by $221 million or 28%. Between them, education and health made up 37% of the aid program before the 2015-16 cuts, but contributed 52% of the cuts.

What was protected? Just about everything was cut in absolute terms. Agriculture and infrastructure are two sectors the government would have been expected to protect given its “aid for trade” and private sector development commitments. And it did. Only modest cuts of 5% and 7% were applied to these sectors.

The big surprise is spending on governance, which, despite a 20% aggregate cut, apparently increased. The growth was only modest, a mere 3%, but nevertheless it’s a striking result. The $28 million increase to our 2014-15 $836 million spend on governance leaves the sector, now at $863 million, as our biggest of all.

Why the shift away from health and education to governance? In his speech at the Australasian Aid Conference in February, DFAT Secretary Peter Varghese admitted that, when governance is not working well in a recipient country, “it is far from easy to determine where exactly we should focus our attention.” And, indeed, Australia’s record in improving governance, especially where it is weakest, is far from stellar. In no country have we tried harder to improve governance than PNG.

It’s hard to give a definitive reason for these sectoral shifts. It will take another year before detailed information on 2015-16 is released. One likely contributor is the geographical distribution of the cuts. The Pacific was largely spared and (based on 2014-15 data) aid for governance is 32% of the total aid spend in the Pacific, but only 17% elsewhere. Multi-year commitments to multilaterals must also play a role, as these are imputed to various sectors.

It should be stressed that the 2015-16 figures are mid-year estimates, and there might be considerable change when more reliable figures are released (perhaps on budget night?). And, in any case, these sectoral estimates are always crude, with many aid expenditures hard to categorise. Nevertheless, the analysis, while rough, is instructive.

While neither the cuts to education and health nor the relative protection afforded to infrastructure and agriculture are unexpected, that governance seems to have escaped the knife altogether is both surprising and a cause for concern.

The Development Policy Centre will hold its annual aid budget breakfast on Wednesday May 4 at ANU. Find out more, including links to registration and livestream, here.

Notes: 2015-16 figures come from 2015-16 Development Assistance Budget Summary Mid-Year Economic and Fiscal Outlook Update [as at February 2016] [pdf]. The percentage figures in Table 3 in that document are applied to total aid ($4051.7). 2014-15 figures come from Table 1 of the 2014-15 statistical summary or green book. Some of the sectoral labels are changed slightly for simplicity. What I call “Humanitarian” is referred to in the budget documents as “Building resilience” and includes environmental spending. Agriculture also includes fisheries and water resource management. Drinking water and sanitation is included with health. The “General” category is a residual.