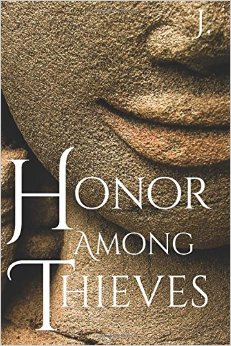 My wife and I often take development reading to bed. The end result is always the same: sleep within minutes. So I knew something was up recently when, hours after I’d dozed off, I woke to find her still reading. Curious, I levered my copy of Historicism and Contemporary Aid Discourses from where it had slumped onto my chest and turned in search of an explanation.

The answer was a novel, but my wife wasn’t shirking her commitment to development, she was reading Honor Amongst Thieves, the latest book from pseudonymous aid writer “J.”. (I reviewed his previous book here.)

Honor Amongst Thieves picks up — plus or minus some jet lag — from where the previous novel left off. As with that story, the new book revolves around Mary-Anne, an employee of the fictitious NGO ‘World Aid Corps’. This time Mary-Anne is in Cambodia. Personally, she’s struggling with a break up and the death of an aid-worker friend. Professionally, she’s struggling too. Not because she’s a bad aid worker, but because she’s working in the messed up world of aid.

World Aid Corps, its ambitious CEO Jillian and almost-odious senior marketing rep Todd, have tentatively been offered half a million dollars for an aid project in Cambodia from Gary, a corporate donor with unclear motives and less knowledge about aid than he realises. Mary-Anne’s job is to give the donor what he wants to make the offer stick, and then make the project work. Jillian and Todd believe this simply requires the careful management of Patty Hammond, the World Aid Corps Cambodia country manager. However, Patty isn’t the issue; the real problem is the order of the priorities: give the donor what he wants, then make the project work. The donor wants to fund wells, but the rural villagers World Aid Corps works with don’t need water, they need cash.

The ensuring tussle between Mary-Anne and Patty, and Jillian and Todd (with the donor as a perplexed but ultimately omnipotent bystander) gives the book its central thread, though other stories are woven in too: the tale of Boupha, a talented local employee of the NGO; the travails of Trevor, a young idealist who plans to do aid work differently; and the sad story of Phirun and Kunthea, a cash poor couple facing a Devil’s choice.

First, as Trevor discovers, successfully giving aid in poor and poorly governed countries — despite what the proponents of the latest fads proclaim — is not easy. It’s not impossible but aid’s mixed track record doesn’t stem from the fact that everyone thus far has missed the obvious.

Second, that first point doesn’t mean we can’t give aid better. In particular, aid is more likely to help when it is focused on what is actually likely to help, rather than what we want to give. Too often aid is driven by our desires, not recipients’ needs. And so Gary wants his money spent on something tangible like wells, rather than what’s really needed, a project that gets money quickly to people like Phirun and Kunthea.

Third, aid takes its toll on aid workers: the work is exhausting, relationships are difficult across borders, trauma is a risk and burnout is common. Set against the tragedy of the acute suffering that aid is meant to assuage, it might feel trite to point this out but it does not make the stresses any less real, as Patty and Mary-Anne’s lives show.

Honor Amongst Thieves isn’t a perfect book. Sometimes the writing fails to flow and sometimes the characters come across more like teaching devices than people. Yet these flaws aren’t acute: no worse than those in the acclaimed anti-globalisation novel The Fountain at the Centre of the World. And at times the writing is very good: Cambodia is richly described; the story of Phirun and Kunthea is kind and evocative; and the way Boupha experiences aid is intelligently conveyed.

Beyond the writing, I have only one substantive complaint: the sample size is too small. At one point ‘Ed’, an anthropologist/geographer makes an appearance to sermonise in favour of qualitative research over quantitative: depth against breadth essentially. And it’s true, there’s a lot to be said for richly describing individual cases (which is essentially what Honor Amongst Thieves offers in fictional form). But one case is not the world. And it would be a mistake to read of the failures of WAC (the NGO’s name was obviously chosen with the acronym in mind) and assume that all aid is equally bad. No aid work is perfect, but some aid work is better than this, which is important to remember.

Yet, with this caution born in mind, this book shows just how much well-written aid novels can teach us. Noam Chomsky once said we may well “learn more about human life and personality from novels than from scientific psychology”. As an aid researcher I hope social science has something useful to offer aid practice too. But Honor Amongst Thieves is an exemplar of what aid fiction can teach us. It’s a page turner too. As you learn, you will enjoy the ride.