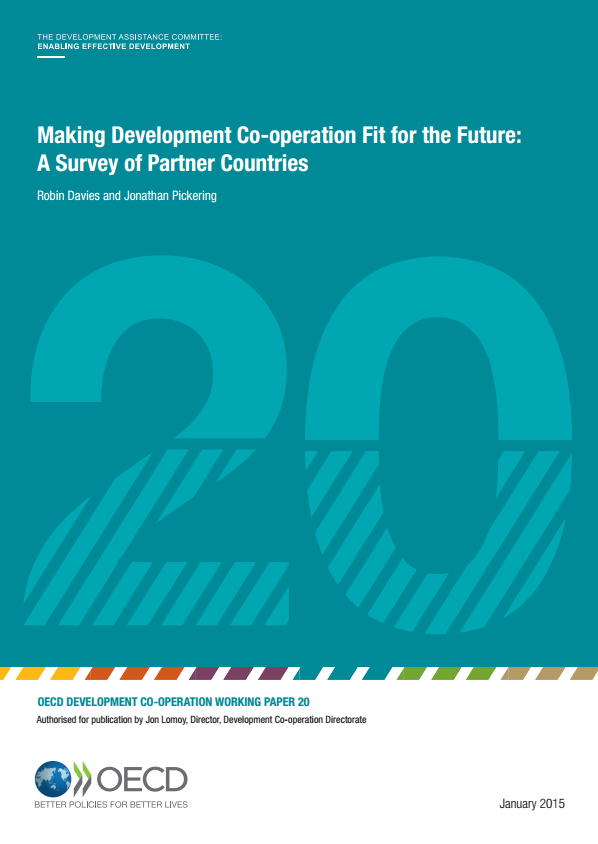 How should aid agencies evolve? Views from developing countries

By Robin Davies and Jonathan Pickering

At the same time, partner countries are becoming increasingly discerning, selective and strategic in their use of development assistance. This is particularly so for countries with medium levels of dependency on external assistance, who not only have more choice about funding sources but also stronger capacities and incentives to exercise it.

Most partner countries are counting on ongoing access to multilateral sources for large-scale financing. They are carving a niche for, and reaching out to, non-DAC bilateral donors, both in recognition of their comparative advantage in economic infrastructure and in order to hedge the risk of aid volume cuts and abrupt exits on the part of DAC providers. And they want DAC development assistance to play a more enabling or facilitative role than at present.

These are some of the findings of a survey we conducted in 2014 at the request of the OECD, which has recently been released as an OECD Development Co-operation Working Paper. The survey covered 40 countries from all developing regions, and included low- and middle-income countries, fragile and non-fragile states and countries with high, medium and low levels of reliance on external assistance. It was part of a wider, ongoing OECD project which aims to help DAC member countries gain a better understanding of developing countries’ medium-term priorities for external assistance from a range of sources, and to determine how DAC development assistance policies and management arrangements will need to evolve in response to changing partner preferences and other emerging factors.

First, partner countries anticipate significant shifts in their development challenges. Overall, achieving economic growth remains their highest priority now and in the future (Figure 1). But countries are optimistic about improvements in governance and institutional capacity, and also in their ability to deliver basic services and generate domestic resources. There are several areas where challenges are expected to increase, including: adapting to climate change; ensuring equitable growth that meets the needs of the poorest; boosting agricultural productivity; and effectively managing revenues from natural resource extraction.

Figure 1: Current and future development challenges (% of all responses) 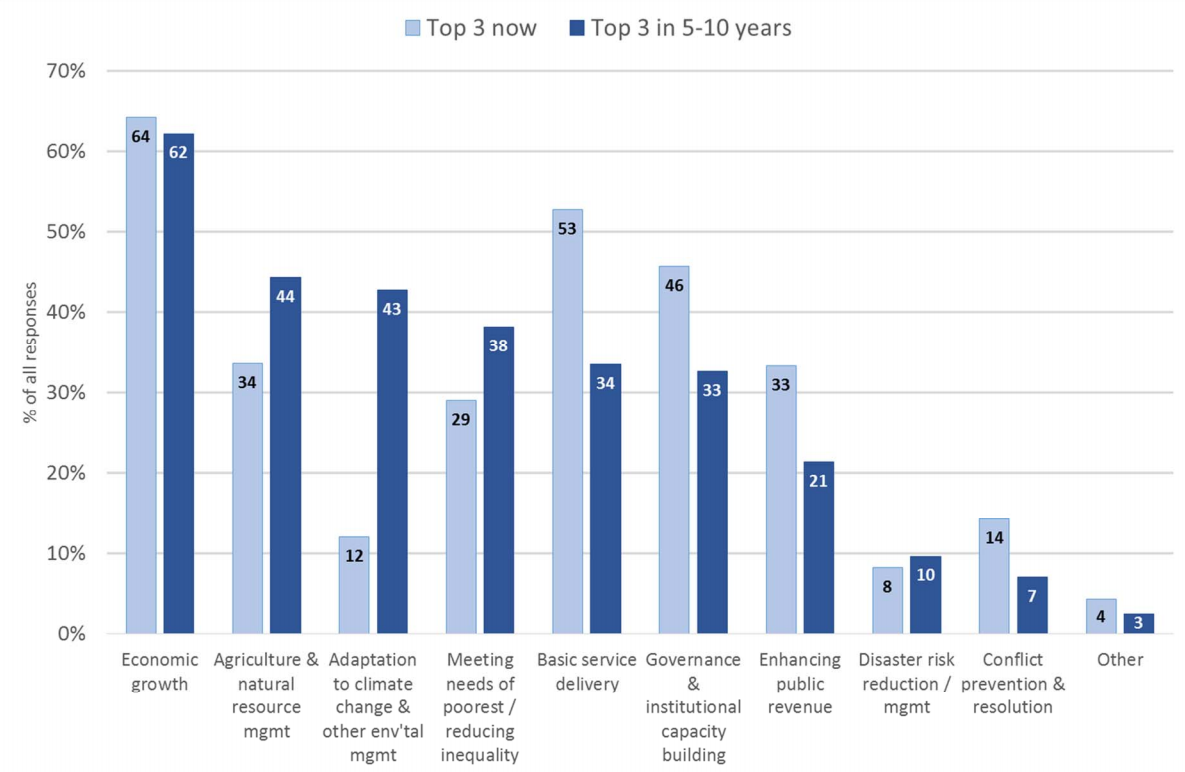 Second, while demand for DAC development assistance will remain strong, partners want DAC members to play a more enabling role in the future. Respondents saw an ongoing, important role for DAC development assistance in meeting emerging challenges. However, with greater access to alternative funding sources, partners want DAC providers to shift to a more enabling role: still providing vital finance, but in support of government-led sector investment programs; providing more and better technical and policy advisory support; and doing more to leverage private flows. This shift is most marked in middle-income countries and in countries with medium to low levels of aid dependency. As a respondent from Morocco said,

Sometimes we have the funding capacity; however we need aid in terms of expertise.

Third, partner countries want development assistance to contribute materially to the achievement of national priorities. Respondents placed very high value on alignment with government policy priorities, predictability and responsiveness as qualities of development assistance providers. Accordingly, they expected general and sector budget support to be the most important modalities for future assistance (Figure 2). As a respondent from Malawi commented,

General budget support has its own shortcomings. […] sometimes our systems may not be up to the standard required. But we still think that the development partners, instead of avoiding risk, can help us manage the risk.

Project-based assistance still retained significant support provided that it is demand-driven and high-impact. 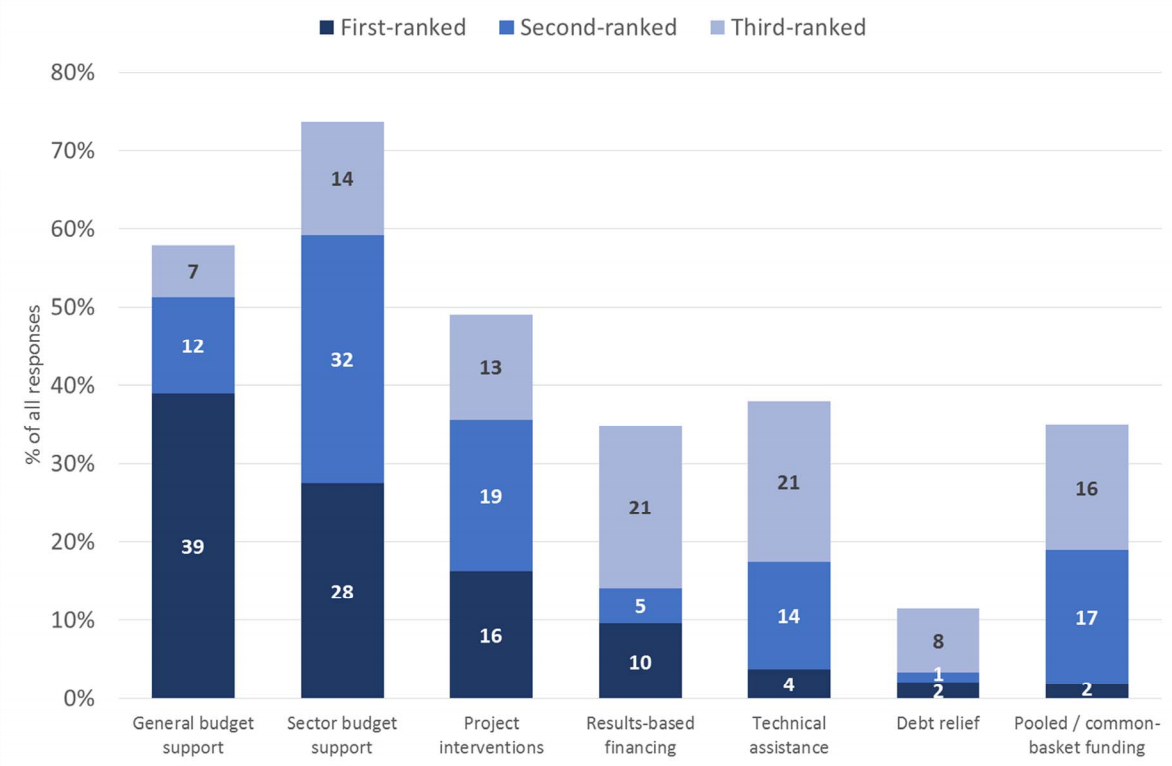 Fourth, partner countries are actively diversifying their providers. While DAC countries will in general continue to be the most important bilateral providers, they are perceived as somewhat unpredictable at present, liable to reduce aid budgets or end relationships, sometimes abruptly. Multilateral organisations, while perceived as very important, high-quality providers, cannot entirely meet partner countries’ needs in terms of volume, expertise and flexibility. Many partner countries are therefore increasingly engaging their diplomatic resources to diversify bilateral sources of assistance, with a view to spreading risk (Figure 3). They show little appetite for thinning the ranks of their development assistance providers and are quite tolerant, even encouraging, of competition among providers.

Figure 3: Main expected sources of finance in 5-10 years’ time (% of all responses) 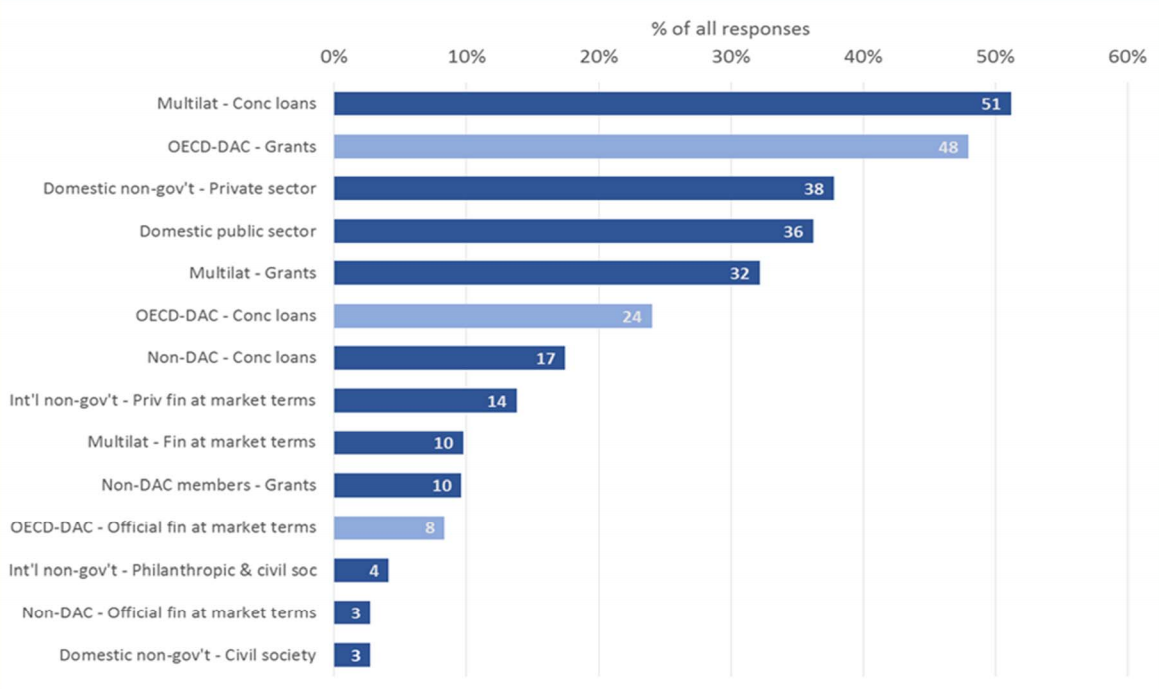 Fifth, each major category of development assistance provider is valued for specific strengths and expected to remedy specific weaknesses. DAC providers are valued for the volume of their financial assistance, public policy experience, transparency, in-country presence, and solid track record of cooperation. Respondents expect them to improve funding predictability, provide more sector budget support, reduce program fragmentation and earmarking, delegate authority to the field and do more to use and build local capacity.

Non-DAC bilateral providers are valued for the additional resources they bring, the important role they play in providing high-priority economic infrastructure in a responsive and timely manner. Respondents would like to see changes in relation to transparency, value for money, country presence and engagement in development dialogue.

Multilateral providers are valued for their ability to support large-scale, long- term and complex government programs, and are seen by partners as a critical, if not dominant, source of financing in the future. They are praised for their high level of alignment, limited conditionality, predictability, strategic focus and the depth and relevance of their pools of expertise, both locally-based and international. Respondents see little room for improvement but they do point to policy and procedural rigidities as irritants. They also want multilaterals to do more to build local capacity.

Overall, the findings of the survey suggest that partner countries, including middle-income countries, see a substantial ongoing role for development assistance from DAC member countries well into the next decade. But DAC development assistance agencies will have to get used to working in crowded spaces under a stronger spotlight. This will require taking their commitments to alignment more seriously and shifting to a more enabling role.

What might these findings mean for Australia’s development assistance program? Australia could be well placed to meet some of these new challenges but will have trouble with others.

Australia’s aid program, up to the time of the integration of the Australian Agency for International Development into the Department of Foreign Affairs and Trade, had quite substantially decentralised authority and expertise to country offices, had built a solid track record on policy and advisory support, and was at least in principle showing an increasing interest in measures that might fully engage the private sector in achieving positive development outcomes.

At the present time there must be a question over the extent to which expertise and authority will continue to be exercised at the field level, which could in time reduce Australia’s impact as a source of public policy support. As for private sector engagement, this government, like the last, talks about it but has yet to give substance to the notion.

Meeting other challenges could be quite a stretch. It could be a while before Australia scores high again on funding predictability. Our aid program has an ‘aid for trade’ spending goal that could see us focusing on things that partners would rather get from other providers, such as economic infrastructure. Australia does little budget support, whether general or sector-specific, and now looks likely to do even less. Australian aid shows no sign of moving away from flagship, front-line service delivery projects, and remains quite fragmented despite various commitments, past and present, to address this problem.

At least Australia has not so far gone in for arbitrary thresholds to determine when countries should ‘graduate’ from aid eligibility or, what is worse, the abrupt cessation of aid to countries that exceed such thresholds. But nor is it clear what factors Australia’s aid program takes into account when adjusting the quantity and content of aid to individual countries as their development needs change.

Among other things, our report reinforces the findings of other recent studies that the future of development assistance agencies is increasingly in the hands of their partner governments. Nevertheless, it is those agencies’ policy and management choices that will ultimately determine whether they are fit for purpose in the years ahead.