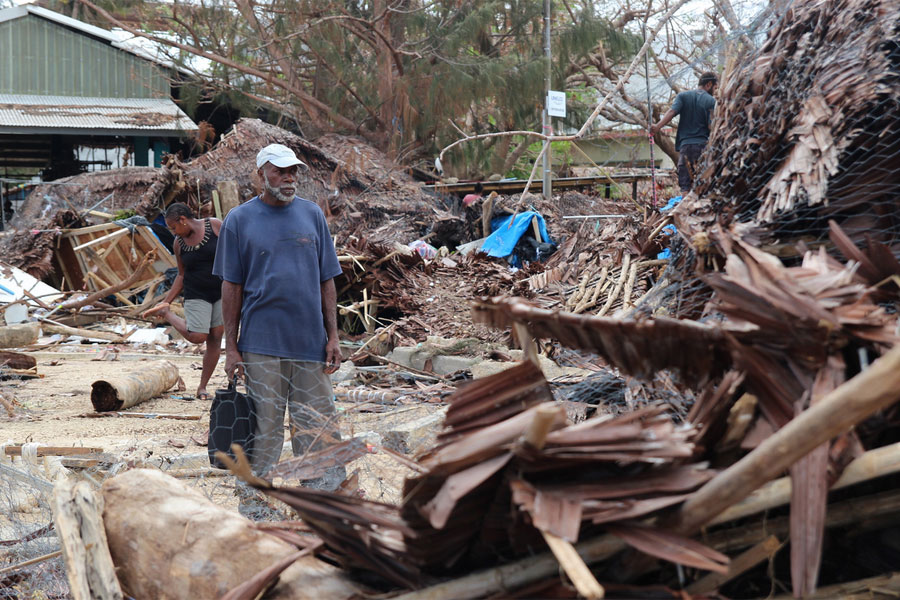 Hungry for justice, thirsty for change 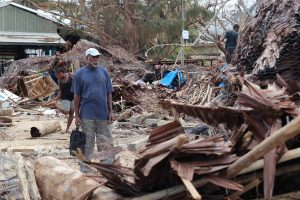 Earlier this month, Caritas Australia, Caritas Aotearoa New Zealand and Caritas Tonga jointly produced the second annual State of the Environment Report for Oceania. The report documents the experiences and observations of Caritas’ partners and contacts throughout the region between July 2015 and June 2016 on five key environmental issues – access to food and water; impact of extreme weather; impact of coastal flooding and erosion; climate finance quantity, quality, and support for the most vulnerable; impact of offshore mining and drilling.

This post outlines the key findings of the report, which reflect the voices, experiences and observations of people at the grassroots and coastal edges of life in the Pacific.

The overall impact of environmental factors affecting access to safe healthy food and drinking water was the biggest change over 2014/15. At the peak of the El Niño drought in Papua New Guinea an estimated 2.7 million people experienced food and water shortages. In Vanuatu’s central district water tanks ran dry and people struggled to cultivate staple foods, compounding the reduced supplies of bananas and other fruits that are a legacy of Cyclone Pam in March 2015.

In addition to specific weather events, ongoing erosion and salination are affecting agriculture and aquaculture. Caritas’ partners from Solomon Islands, Kiribati, Samoa and Papua New Guinea, among other countries, have reported losses of coconut, pandanus and swamp taro sources this year as a result of coastal erosion and salination. In Solomon Islands, damage to coral reefs attributed to higher ocean temperatures, destructive fishing techniques and contamination from flash floods caused by deforestation have led to reported falls in fish stocks.

Reduced access to food and clean drinking water also has direct effects on health and education. Widespread conjunctivitis in Kiribati and the Marshall Islands was reported, associated with unhealthy or inadequate water for hand-washing, linked with the El Niño-induced drought. Ongoing reports of malnutrition within countries including Fiji, Vanuatu and Tonga will have long-term impacts on children’s education.

The combined effects of drought and several major cyclones over the past year exacerbated food and water stress. Our assessment is that extreme weather events have a severe impact on people across the Pacific. In Fiji, an El Niño-induced drought prior to Cyclone Winston, which was followed by Cyclone Zena, damaged crops and created a shortage of fresh vegetables, fruit and fish. In some areas, rain and floods washed away up to 80 percent of replacement seeds and seedlings planted after Winston. Rehabilitation and restoration of housing and the agricultural sector in Tonga’s Ha’apai group is still ongoing from Category 5 Cyclone Ian that hit in January 2014, and has now been worsened by the El Niño drought, threatening the resilience of communities in the area.

The impact of coastal erosion and flooding was again a widespread issue across the Oceania in 2015/16. Both low-lying atolls as well as larger volcanic islands across the region are now being affected. On Abaiang in Kiribati, for example, seventeen villages on the main island and two smaller islets have experienced coastal erosion, flooding or salinated water. All of the people in Tebunginako village on Abaiang atoll in Kiribati have relocated. In West Guadalcanal in the Solomon Islands, the sea has eroded up to 200 metres and big rain trees are being washed into the sea, leaving the shoreline and essential infrastructure vulnerable to further erosion. In Honiara, the estimated US$100 million process to relocate the National Referral Hospital in from its beachfront location has begun. The shoreline has eroded up to the hospital buildings and in recent years bigger waves from king tides and storm surges have inundated the hospital and staff have been forced to evacuate patients four times.

The outcomes of these events could have been far worse for many communities in the Pacific. Community resilience and effective humanitarian assistance has reduced the impact of these disasters. This has saved lives. But vulnerable communities must not be left behind. Caritas’ experience indicates that successful projects must involve local populations as much as possible – in assessing needs, planning and implementing projects. Our assessment of the level and degree to which climate finance offers tangible support to the most vulnerable people is that it has improved over last year, but remains inadequate.

Successful projects also require adequate funding. At the Paris COP21 conference in 2015, countries made US$1.5 billion in new climate pledges, with the Green Climate Fund (GCF) becoming the primary global climate funder. Tonga is among at least six Pacific states preparing to receive climate finance through the GCF, but there are concerns that grassroots experience is overlooked. While recognising the need for good governance of funds, the application procedure was seen as long and complex and some stakeholders feel that the concept note for the project was written without sufficient consultation. “There was no one from Tonga,” said Acting Director of Caritas Tonga, Amelia Ma’afu, “it just seemed very hard with a lot of information required, and I wondered if it was designed to be impossible to access funds?” The overall quantity of climate finance in the Pacific relative to what is what is needed remains inadequate.

The quality of available aid was also rated inadequate. Despite the documented needs and the large role Australia plays in the region, there is no dedicated climate strategy within the Australian aid program. The majority of climate finance is allocated to Pacific island nations for humanitarian disasters, which is vital, but our report shows that unless a climate lens is applied across the board, the cumulative impacts of the worsening climate situation threatens progress in each of the priority areas of Australia’s aid program.

The overall impact of offshore prospecting, exploration and commercial exploitation of oil, gas, and minerals in the seabed in 2015/16 was low, although this was largely because exploration was on hold during this period. Our research found growing concerns across the Pacific about deep sea mining, and little acknowledgement of these concerns by governments and mining companies.

Overall, the state of the environment in Oceania appears to be deteriorating. Food and water insecurity resulting from severe weather events, successive emergencies, and ongoing climatic changes are of particular concern. Coastal erosion, flooding, and groundwater salination also remain a long-term threat to Pacific peoples, disrupting agriculture, washing away infrastructure and homes and causing increased dislocation. There have been more reported instances of people being forced to move as sea levels rise.

In the report, we offer a number of recommendations, which point in particular to the need for determined and coordinated action across the region and the world. Governments, multilateral agencies, non-government organisations and businesses must work together with the peoples of the Pacific to address current environmental challenges and mitigate against future impacts. Action at a global level was promising in 2015/16, with the signing of the Paris Agreement a particular highlight. But this now needs to be backed up with concrete action and financial commitments.

Sarah Marland is a human rights researcher and campaigner, who co-authored the State of the Environment for Oceania 2015/16 report on behalf of Caritas Australia.

Sarah Marland
Sarah Marland is a human rights researcher and campaigner, who co-authored the report on behalf of Caritas Australia.