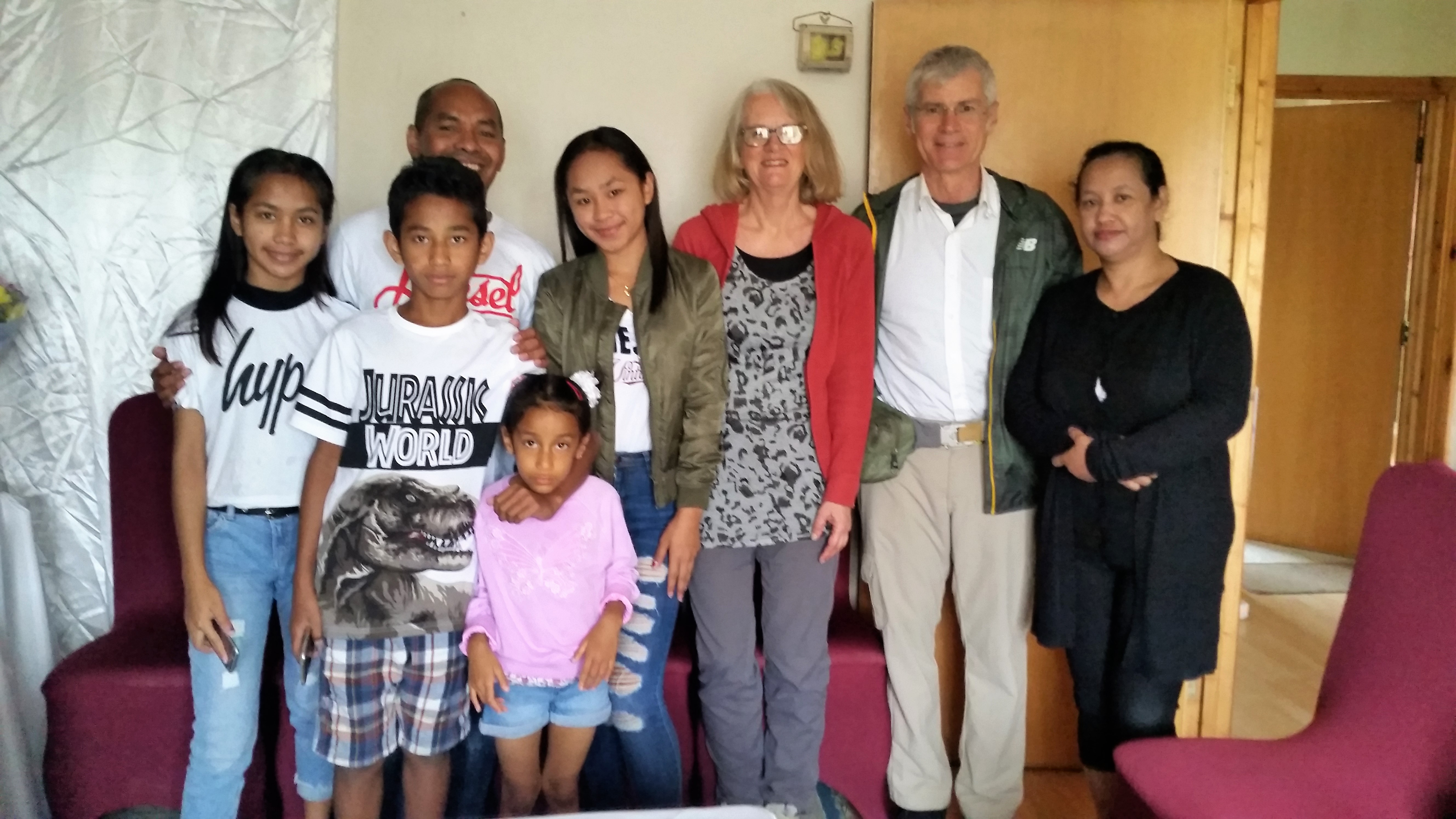 This Timorese man has worked in Dungannon chicken factory since 2009. In 2018 he brought his family to the UK because of the difficulties of getting paid work in Timor and better education system in the UK. Photo with Ann Wigglesworth and Lionel Boxer.

Identity and opportunity for Timorese migrant workers in the UK

This year I revisited some of the Timorese migrant workers in Northern Ireland whom I first visited two years ago (and wrote about here), to see what their plans were in the context of Brexit. I also visited two Timorese women whom I knew when they were involved in women’s NGOs in Dili over many years, and who have recently moved to Cambridge. As Timor-Leste has stabilised, fewer international donors are supporting local NGO initiatives. NGO workers with professional skills are thus making their way to the UK to support their families.

Migrant workers typically work in low-skilled roles, as typified by the numerous Timorese working in meat works in Northern Ireland, as well as supermarket, warehouse and cleaning jobs around the UK. Of the two women in Cambridge, one was working in finance and administration in a Dili-based NGO and is now working in the Hilton Hotel. The other, who has an English degree from the National University of Timor-Leste and was teaching in a language school before leaving for the UK, started work as a cleaner but was able to improve her income and status as she progressed to waitressing in the Hilton Hotel and then to a very responsible position as a cashier in a money shop (like Western Union). This is good progress in just a year in the UK.

One of the workers I had interviewed in Northern Ireland in 2016, whom I revisited this year, has now given up his job in the Northern Ireland meat works and has started a new role as a school teacher, teaching numeracy and literacy to non-English speaking kids. Thus, some migrant workers are succeeding in obtaining work in professional roles.

Timorese who intend to continue working in the UK are required to apply for a residence permit before Brexit takes place next March, but they do not anticipate any difficulty in achieving this. There are significant advantages living in the UK, apart from achieving a regular income. For instance, free quality education in the UK is seen to offer a huge advantage to children growing up there, opening opportunities that they cannot dream of in Timor, where jobs continue to be scarce and poorly paid and education of questionable quality. After just a year in the UK, one migrant mother has decided to take her son, currently living with her sister in Dili, to UK to attend school. Similarly, a worker of eight years in Northern Ireland has decided to bring his wife and children to the UK largely for educational reasons. The uncertainty of Brexit is thus encouraging people to make decisions about their future now.

The numbers of Timorese migrants working in the meat works in Northern Ireland has declined for the first time. This is because there are new stringent regulations by the Portuguese to reduce the number of new passports being issued. Some Timorese who intended to travel to the UK have been informed that they will have to wait four to five years for a Portuguese passport. As the free passage of Europeans will close when the UK leaves the European Union next year, I wonder whether this reflects Portuguese collaboration with Britain to avoid a rush of Timorese to the UK before then?

A number of workers have brought their families to the UK on the European Union reunion program, their wives and children arriving on Timorese passports. Some of these passports are now facing renewal, but no facilities exist for passport renewal at the Timorese embassy in London. Workers say they can ill afford to make the expensive trip back to Timor-Leste for their family for passport renewal. They consider their Timorese passports are important for their children to grow up with a Timorese identity. It has long been a source of anger that the Timorese embassy does not recognise workers who have arrived on Portuguese passports. In spite of Northern Ireland hosting the largest Timorese community in the UK, no Timorese diplomatic officials have visited since 2010. Yet, they complain that the government undertook the costly exercise of setting up voting centres in Northern Ireland and London for the Parliamentary elections in May, with staff from the National Electoral Commission spending several weeks in the UK to oversee the process. While they were happy to have the opportunity to vote, they felt the government attitude toward them was inconsistent – not recognising them for support as Timorese citizens due to their Portuguese passports, but recognising them for voting purposes.

Timorese are in the UK because there is no work in Timor-Leste. The Timorese government supports both the temporary worker program with South Korea and the Seasonal Worker Programme with Australia, bilateral government-managed programs. The numbers admitted to these programs are quite small compared to the demand for work; the ability of Timorese to go to UK on Portuguese passports has been a lifeline to many Timorese families. Remittances to Timor-Leste are the second largest private source of foreign revenue after oil, with US$40 million remitted in 2017, more than coffee, Timor’s main export. The majority of the amount remitted ($27 million) was from the UK where there are an estimated 16,000-19,000 Timorese. By comparison, there are 9,200 Timor-Leste born people living in Australia. The number in the UK also dwarfs the number of workers from Timor-Leste in Australia under the SWP (less than 1,000 a year for six months only) and in Korea under its temporary worker program (estimated to be about 1,500 at any one time).

The setting up of an association for the Timorese community in the UK is now under discussion to create a mechanism for mutual support and to link between Timorese migrant communities scattered across the UK. Both times I visited, Timorese workers in Northern Ireland warmly thanked me for visiting them. They said that no one else had taken an interest in their situation. They are far from home and unable to make visits to Timor without very high costs that they can ill afford. They also have to take responsibility for issues arising in the community. One example given was the death of Timorese workers in UK – the Timorese community has taken responsibility to communicate with the families of the worker and raise money for the repatriation of his body, even when they are not related (as discussed in my earlier report, pp. 7-8).

Understanding the important contribution that these migrants to the UK are making to the Timorese economy, and their desire for ongoing links to their homeland, should be enough for the Timorese government to recognise their UK resident citizens as worthy of their care and attention.