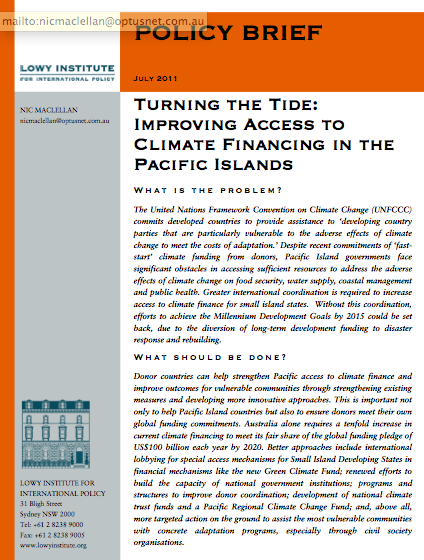 Improving access to climate funding for the Pacific islands

Public debate over the carbon tax in Australia has focussed on the levels of funding required to compensate low-income households and emissions intensive industries. But the current debate has largely ignored Australia’s obligations for international climate financing.

The United Nations Framework Convention on Climate Change commits developed countries to provide assistance to “developing country parties that are particularly vulnerable to the adverse effects of climate change in meeting the costs of adaptation.”

This funding is especially important for neighbouring Pacific island states, which are vulnerable to climate change but have barely contributed to the increasing greenhouse gas emissions which drive global warming.

Even though international climate negotiators have not yet agreed on a new climate treaty, recent summits in Copenhagen and Cancun recognised the need for urgent funding to help developing countries adapt to the adverse effects of climate change.

President Anote Tong of Kiribati has stated: “The urgent need for the flow of adaptation funds to address the more urgent adaptation needs of the most vulnerable countries is a matter over which there is general consensus. It is not a matter for negotiation or to procrastinate over, otherwise it will be too late for some countries and any subsequent agreement will be meaningless.”

At last year’s climate conference in Cancun, developed countries committed to “fast-start” funding approaching US$30 billion in 2010-12, with a goal of US$100 billion a year by 2020. Minister for Climate Change Greg Combet confirmed that Australia’s share of this initial ‘fast-start’ pledge would amount to $599 million over three years.

Pacific island governments have welcomed these funding pledges. However, island leaders have stressed that there are still too many obstacles to access these funds. Our Pacific neighbours are not yet able to tap sufficient resources to respond to the adverse effects of climate change on food security, water supply, agriculture and public health.

In ‘Turning the tide’, a new paper published by the Lowy Institute for International Policy, we detail the obstacles faced by Pacific nations in accessing climate financing and outline ways that funding can be better managed to assist those people most at need.

One key challenge is to ensure Pacific countries have the capacity to manage increased flows of funding.

Pacific governments readily acknowledge their capacity constraints and are moving to ensure the effective use of taxpayer funds. Some nations have developed national Climate Task Forces that bring together government officials with private sector organisations, NGOs and relevant community leaders. Tonga and the Cook Islands have developed Joint National Action Plans to link their response to natural disasters and climate change, avoiding duplication of effort and reporting in these overlapping sectors.

These efforts can obtain results. Earlier this year, Solomon Islands was amongst the first nations in the world to obtain funding from the Kyoto Protocol Adaptation Fund, for a $5 million project on food and agriculture that aims to reach 51,000 households across the country – a case study in the Analysis paper ‘Improving access to climate financing for the Pacific Islands’ details the way that the adaptation funding proposal was developed, and the implications for neighbouring countries.

But the obstacles to improved financing don’t just lie in the islands. One major problem is that many international financing mechanisms are not designed to take into account the small size of island states. Pacific governments must help small village communities in far flung archipelagos, at greater expense per capita than larger Asian and African countries.

Another problem is the spaghetti bowl of global funding mechanisms. More than forty international climate funds have been created in recent years, including the Kyoto Protocol Adaptation Fund, Climate Investment Funds administered by the World Bank, and a new Green Climate Fund. Beyond these global mechanisms, there are bilateral programs such as Japan’s Hatoyama Initiative, the European Union’s Global Climate Change Alliance and Australia’s International Climate Change Adaptation Initiative.

Each of these international structures has their own timelines, reporting requirements and burdensome administrative processes. As former Tuvalu Prime Minister Apisai Ielemia has stated: “We are deeply disappointed with the manner some of our partners are burying us in red tape. This is totally unacceptable.”

Interviews with government officials around the region suggest that the time taken to deal with multiple donor requirements diverts energy from action on the ground, jeopardising the very outcomes that everyone wants to see. At the 2008 Forum in Niue, Pacific leaders stressed: “The priority of Pacific small island developing states is securing sustainable financing for immediate and effective implementation of concrete adaptation programs on the ground.”

Early action on climate adaptation has practical benefits, as governments – both donors and recipients – can strengthen their capacity to implement larger scale programs in the future. Over the next decade, Australia requires a tenfold increase in existing climate financing to meet its fair share of the global funding pledge of US$100 billion each year by 2020.

‘Turning the tide’ outlines innovative approaches that could strengthen Pacific access to climate finance and improve outcomes for vulnerable communities in our region. These include special access windows for Small Island Developing States in existing financial mechanisms; strengthening donor co-ordination and national government institutions; development of national climate trust funds and a Pacific Regional Climate Change Fund; and more targeted action on the ground to assist the rural communities.

Nic Maclellan works as a journalist and researcher in the Pacific islands, and is author of ‘Turning the tide’, published by the Lowy Institute for International Policy.