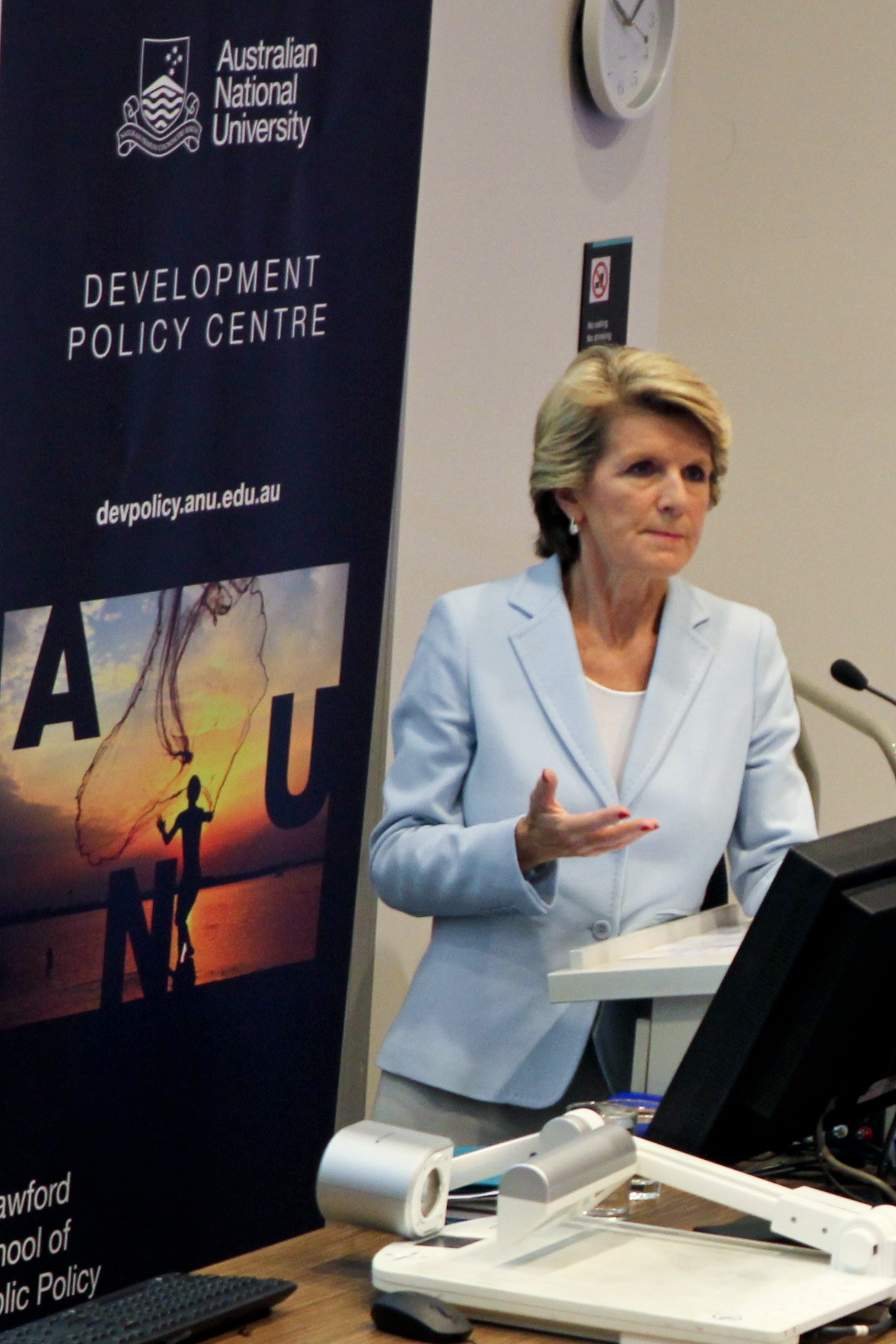 In her own words: Julie Bishop on aid (part one)

Julie Bishop’s performance as Foreign Minister of the Abbott Government has been widely praised. She is uniformly identified as the Cabinet’s standout performer by political commentators, an assessment shared by the public. Some have gone as far as to call Bishop a rock star. Even Bishop’s jogs, explains Latika Bourke, have become a ‘capital T’ Thing.

It is a good thing Bishop likes running. Since becoming Foreign Minister she has faced an endlessly accelerating diplomatic treadmill. Since September 2013, Australia has twice held the Presidency of the United Nations Security Council, chaired and hosted the G20, signed three free trade agreements, deployed troops to the Middle East to combat Islamic State and been thrust into playing a leading role in the aftermath of the twin tragedies of MH370 and MH17. In dealing with the most recent of these airline disasters, Bishop’s negotiating skills so enamoured the Dutch that she was honoured by their foreign ministry.

Between all these headline-grabbing, high-stakes handshakes Bishop’s role in repackaging Australia’s aid program has received very little attention. In the eyes of the public and the commentariat, the performance of Australia’s Foreign Minister is evaluated almost entirely without reference to aid. Now, that the biggest ever cuts to Australia’s aid budget have severely dented Bishop’s credibility on aid, it is even more likely that Bishop’s concerted effort to recast development policy over the first year of her tenure will fade, unremarked-upon, into history. From this admittedly early vantage point, it is hard to see any future evaluation of Bishop’s legacy being able to see much beyond the disbanding of AusAID and the severe expenditure cuts.

This two-part post kicks against the goads by documenting how Bishop sought to articulate a ‘new aid paradigm’. It does so by focusing predominantly on the four key speeches Bishop made on aid to domestic audiences in her first year as Foreign Minister[1]:

Each of the above were substantial speeches, ranging between 3,300 and 4,300 words, requiring Bishop to craft a story about aid to various constituents of the development community in Australia. Together, they offer up 626 sentences, 14,656 words, 25,095 syllables and 73,701 characters for analysis.

The remainder of this first post unearths the common words, phrases and themes that comprise Bishop’s speeches and examines what this reveals about her priorities. The second part takes a more holistic view, understanding these speeches as an ongoing story. Appreciating how this narrative has unfolded reveals what ideas and beliefs are central to the Foreign Minister’s vision for a reformed Australian aid policy.

What matters to Bishop? What does she talk about most? The word cloud below visualises all 14,656 words spoken by Bishop during these speeches. The size of each word reflects how often it was used. Economic (91) appears more often in these transcripts than growth (59) and poverty (54). 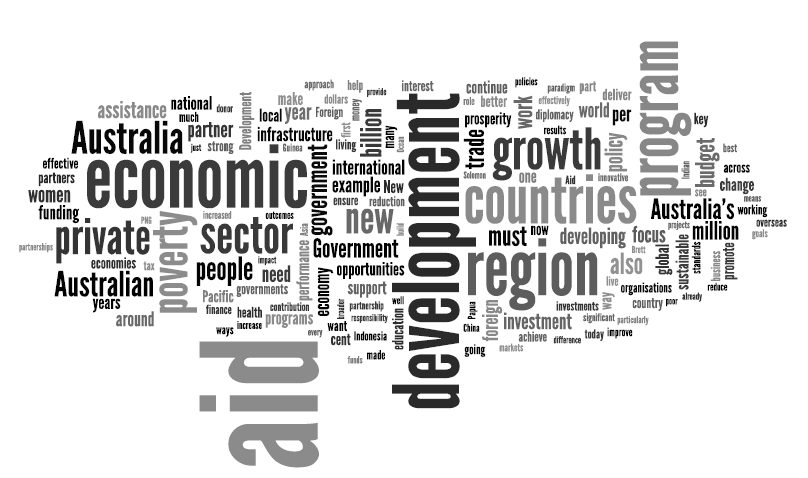 This emphasis on the role of the market was broadly in line with expectations from a Conservative government. More surprising was how deeply conscious Bishop was of communicating that Australia’s aid program will be refocused on our immediate region. The word region (81 times) appears to unexpectedly feature near the top of the most-used-word charts. Rolled out 35 times, the phrase in our region ranked as Bishop’s most used phrase (i.e. three or more words) across the four speeches, beating out the private sector (27 times) and our aid program (22 times). The extent to which the repetition of key tropes has become a practised verbal tic for Bishop is reinforced by looking at the closing paragraphs of her recent address to the 40 Years of Australian Aid exhibition:

We have seen this occur in our region over the past 40 years and this exhibition gives us that sense of history and achievement. I pay tribute to all those who have contributed to the delivery of Australian aid, have delivered to the betterment of nations in our region and beyond. Australian aid has done remarkable things and it’s been delivered by remarkable people.

The decision to continually emphasise Australian aid being delivered in our region is a useful way of advancing a number of Bishop’s key themes. Early on, pressing this theme quickly distinguished Bishop’s program from that of Labor. Repudiating what the Coalition saw as Labor’s geographical extension of the aid program in the Caribbean and Africa in pursuit of a Security Council Seat, by “consolidating our efforts on our neighbourhood” (Speech 2), Bishop could immediately claim to have reintroduced a measure of stability to the aid program after the uncertainty characterising the late-Labor period. Here Bishop was playing on the widely-held concern amongst the development sector that the aid program had expanded too quickly, lacked suitable quality controls, and was increasingly pursuing haphazard and unrelated objectives. Focusing our aid – another popular word couplet, with 39 appearances – in our region helped Bishop to take ownership of the aid program with an immediate sense of purpose.

There are at least three other key themes which appear in each of the four speeches. First, Bishop repeatedly emphasises the need for the aid program to empower women and girls, chiefly by creating and extending opportunities for ‘economic empowerment’. The appointment of former Senator Natasha Stott-Despoja as Ambassador for Women and Girls personified this priority. Second, Bishop continues to demonstrate her passion for PNG. Each speech contains at least one illustration or anecdote from PNG stemming from her personal experience. Third, Bishop is unrelenting in highlighting the virtues of The New Colombo Plan, a “signature policy” which aims to “build long term capacity and personal and business and academic links across the region” (Speech 1).

Also telling was what Bishop avoided saying. The words quality (7) and results (13) feature far less prominently than might be expected. And not once did Bishop utter ‘climate’ in any of these speeches, not even as a way to talk about prevailing economic conditions, as in, for example, ‘the global economic climate’. Similarly, environment is never used in the sense of referring to the natural world we inhabit. In fact, Bishop says little about the beyond aid agenda, her recent comments on international tax reform notwithstanding. 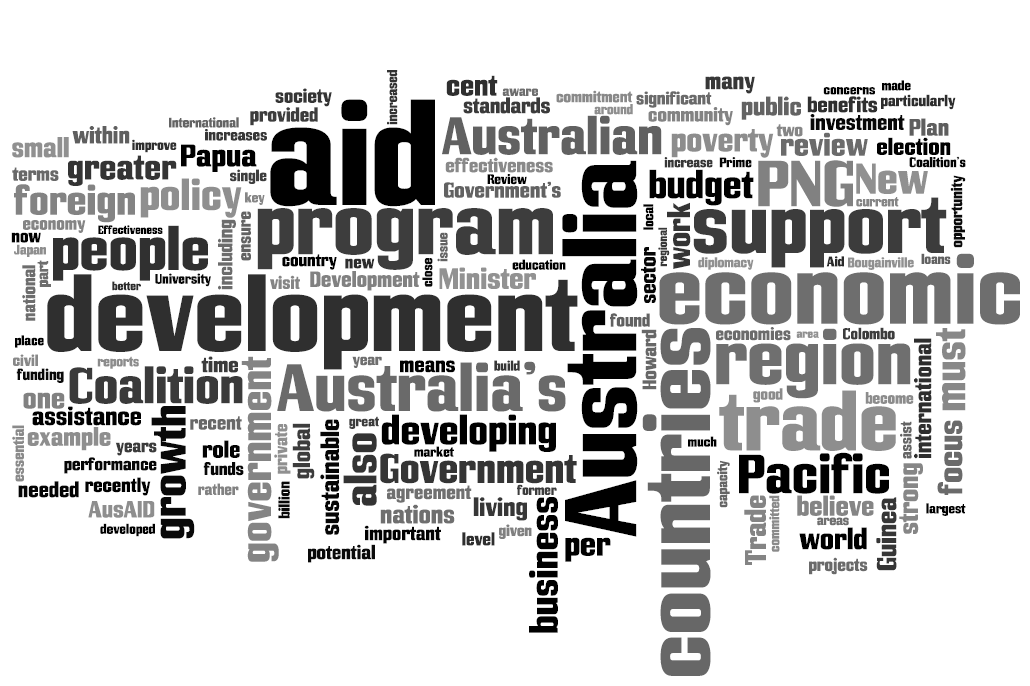 Bishop’s desire to refocus aid ‘in our region’ was evident in Opposition. The similar phrases in our region (10), in the region (10) and in the Pacific (9) were ranked in positions three through five on the ‘three word phrase’ leaderboard; only Papua New Guinea (14) and the aid program (11) ranked higher. An economics-first position was also apparent, with trade (59), economic (53) and economic growth (17) featuring many times during these speeches too. And, again, just like in her speeches once Foreign Minister, in Opposition Bishop seemed to deliberately avoid uttering climate or environment. Both appear once, but only as descriptors for prevailing economic conditions. The beyond aid agenda also fails to register a mention.

The clearest difference between the pre and post 2013 election speeches relates to what appears to be a concerted attempt by Bishop and her staffers to ‘refine the message’, especially by ensuring consistent use of key language. For example, Bishop settled on in our region as her way of talking about our neighbourhood instead of flitting between that phrase and in the region and in the Pacific. And Bishop talked about our aid program only three times while in Opposition but 22 times since becoming Foreign Minister. Most notable, however, is the sudden appearance of the term ‘economic diplomacy’ in Bishop’s speeches on aid following her election to government. In part two of this post I will begin by discussing the significance of this term to Bishop’s views on aid policy.

This is the first in a two-part series examining Foreign Minister Julie Bishop’s speeches on aid. The second part can be found here.

[1] Bishop gave two speeches on Australia’s commitment to the MDG’s at the United Nations in September 2013, yet each was brief and directed at an international audience. Bishop’s significant speech at the launch of Australia’s Economic Diplomacy Policy, delivered in August 2014 at the Lowy Institute, contains much on aid, but is ultimately a broader foreign policy speech.

Benjamin Day
Benjamin Day is an Associate Lecturer in the Department of International Relations at the Coral Bell School of Asia Pacific Affairs, ANU, where his research and teaching focuses on foreign policy decision making, especially around aid policy. Prior to academia, Ben spent a decade working in the development sector.