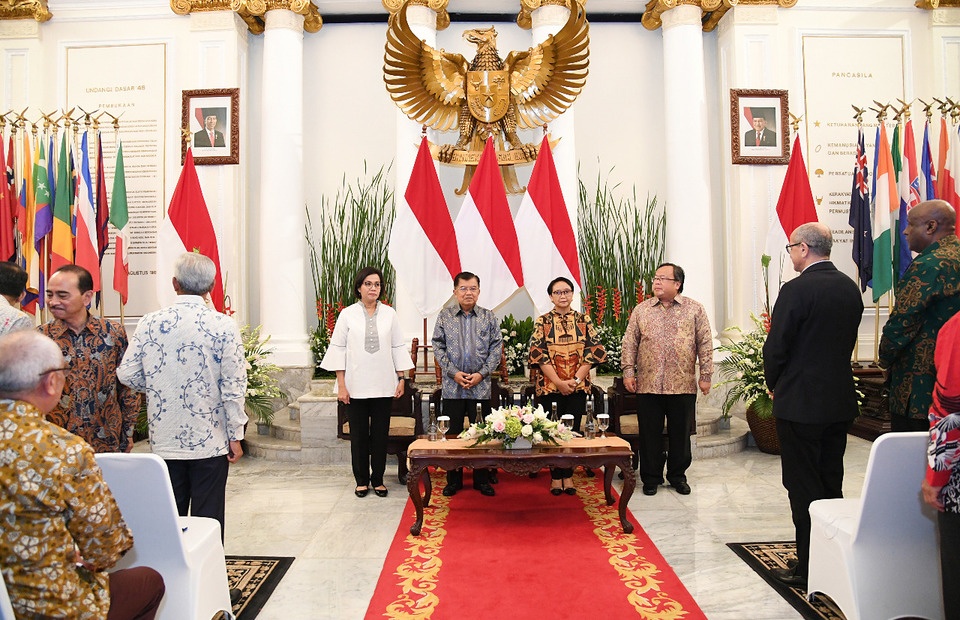 The Indonesian AID launch in Jakarta in October 2019

Indonesian AID: the politics and bureaucracy of Indonesia’s development cooperation

On 18 October 2019, the last day of the first term of Joko Widodo’s presidency, Indonesian AID (Agency for International Development or Lembaga Dana Kerjasama Pembangunan Internasional – LDKPI) was launched by Jusuf Kalla, then Vice President of Indonesia. In his remarks, he highlighted the need for Indonesia to implement ‘diplomasi tangan di atas’ (hands-on diplomacy) as a way to improve Indonesia’s position in international development cooperation, especially as a donor.

Three very prominent ministers attended the launch: Sri Mulyani Indrawati (Minister of Finance); Retno Marsudi (Minister of Foreign Affairs); and Bambang Brodjonegoro (then the Minister of National Development Planning/BAPPENAS). Their ministries, plus the Ministry of State Secretariat, have been the main institutions involved in developing Indonesian AID as part of institutionalising Indonesia’s South–South Cooperation (SSC).

In 2019, the Government of Indonesia committed Rp 3 trillion (US$212 million) from the state budget as an endowment fund for aid, including to the five Pacific Island countries of Tuvalu, Solomon Islands, Fiji, Nauru and Kiribati, as well as the Philippines and Myanmar. The new Indonesian AID arrangement saw the management of the dana abadi (endowment fund) placed under the Ministry of Finance. The role of the Ministry of Finance as the manager of aid funds thus became significant, with policy directions framed by the Ministry of Foreign Affairs based on its foreign policy agenda.

The launch of Indonesian AID did not come as a surprise for many who had been following the discussions around Indonesia’s SSC institutional arrangements. Plans to scale up SSC and develop an aid agency had been discussed among ministries since at least 2009, after the launching of the Jakarta Commitment: Aid for Development Effectiveness – Indonesia Road Map to 2014 (an Indonesian adaptation of Paris Declaration aid effectiveness principles signed on 12 January 2009 and adopted by 26 development partners/donors working in Indonesia). While the timing of AID’s establishment was driven by pressure from the former Vice President to launch the agency before he stepped down, the idea came from the need to manage existing, scattered and unstructured SSC aid activities and programs.

Over a year after AID’s launch and with Indonesia suffering the effects of COVID-19, several issues have emerged. One is the gap in regulations on the management arrangement and scope of work of Indonesian AID. The regulations (PP Pemberian Hibah no. 48/2018 & no. 57/2019 – Government Regulation on Aid Management) focus on the allocation and disbursement of aid funds but not on technical cooperation, which is the main platform for Indonesia’s SSC. The National Coordination Team on South-South Cooperation (NCT SSC) still exists outside of Indonesian AID and implements Indonesia’s South-South and Triangular Cooperation program, including several new online technical cooperation programs, despite the establishment of Indonesian AID. As a result, overall development coordination and management remains problematic.

Looking back, Indonesia’s South-South Cooperation was built upon notions of solidarity, win-win and mutual benefit, and based on the spirit of the famous 1955 Bandung Conference. These narratives have shaped a model of southern cooperation that is continuously evolving, as well as the perceptions of Indonesia’s leaders in relation to development cooperation. Indonesia’s SSC has indeed been through a long journey, starting with Soekarno’s narrative of anti-colonial struggle and reconstruction of the global order, and reflecting the priorities of successive presidents. For example, President Joko Widodo has emphasised relations with other Muslim countries, such as Palestine and Afghanistan. In comparison, Susilo Bambang Yudhoyono’s presidency (2004-2014) focused on relationships and cooperation within global forums and in the international context. Thus, Indonesia’s development cooperation cannot be separated from the political agenda and identity politics pursued by its leaders.

In practice, the President has prerogative to rule on development cooperation priorities and aid targets. Budget allocations, priority countries and specific activities in the aid program are mostly discussed within the executive branch of government rather than parliament. However, implementation may not necessarily be in accordance with presidential policy directions, because of the involvement of multiple ministries —layers of bureaucracy can hamper progress. The current arrangements, while perhaps an improvement, do not seem to have solved Indonesia’s development cooperation problems yet. One solution might be to re-examine regulations to minimise implementation constraints.

Miranda Tahalele
Miranda Tahalele is an independent researcher with a PhD from the Australian National University. She has previously worked with a wide range of international and Indonesian development organisations.