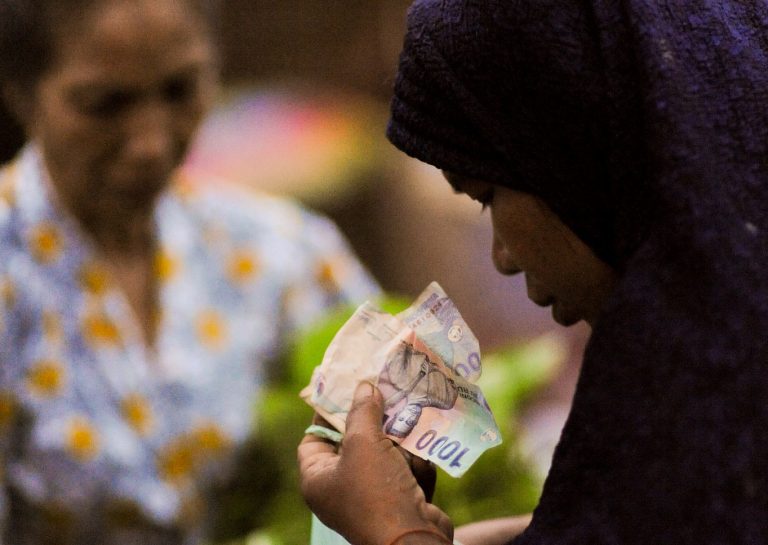 Ibu Theresia from Kupang has a small kiosk in front of her house. Her husband says that he turns over his salary to his wife at the end of each month and lets her take care of finances at home. For Ibu Theresia, it makes sense for her to manage household finances as she understands best what her family needs and what needs to be prioritised in terms of spending. She candidly notes that if financial decisions were left to her husband, “the money might just get spent on unnecessary items such as cigarettes”.

A recent survey conducted by Oxford Policy Management and part-funded by DFAT, called the Survey on Financial Inclusion and Access (SOFIA), revealed two findings that, at first, appeared contradictory about the roles played by men and women in Indonesian households. In particular, women appeared to both have, and not have, financial control. On the one hand, most Indonesian women in the provinces surveyed were unlikely to own certain key assets such as land, property or bank accounts; on the other hand, the SOFIA survey results show that women tend to play a critical role as ‘financial managers’ in the household.

The survey, which covers 20,000 respondents in the provinces of East Java, West Nusa Tenggara (NTB), East Nusa Tenggara (NTT) and South Sulawesi, tell us that 61% of women make decisions regarding the management of finances independently, compared to only 24% of their male counterparts. Similarly, more than half of the men surveyed consult their wives when it comes to household management decisions, while less than a third of women consult their husbands. Moreover, a larger proportion (11%) of men stated that they are not at all involved when making financial decisions, compared to women (only 1%) who said the same.

What does this tell us about women’s economic standing in Indonesia? While SOFIA does not primarily or only explore the use of financial services from a gender angle, the survey findings do present intriguing insights into household dynamics, and reveal the important role that women play as hidden financial managers. Although men own property or accounts, women are the ones who keep track of household income and make decisions regarding spending. “I allocate the monthly income for children’s school fees, savings in an arisan, pay for meals, and I save the rest in a cooperative,” explains Ibu Ariance from NTT.

For women like Ariance, money management at home is not just about budgeting to cover the cost of food and immediate or basic necessities; women’s role as financial managers in households can extend to money management to help families make long term investments – such as building a home. “I’m the one who plans and budgets everything for the construction of this house,” says Ibu Ariance. Her husband Ruben, a fish trader, calmly notes, “My wife manages the money; she knows best what to do”.

And it’s not just saving – these findings also help to reveal the entrepreneurial spirit of many Indonesia women. Ibu Theresia, for example, uses the extra income (from the salary that her husband allocates to her every month) to buy gold jewellery at pawnshop auctions. This is not for her own use, but primarily for savings and investment purposes. Other women, meanwhile, save up small amounts from their partners’ salaries or earnings from farming activities in order to run their own small businesses.

Arisans in place of banks

Interestingly, despite the central role played by women as financial managers in households, they are less likely than men to use banks, and a significantly higher proportion of women (particularly in rural areas) use informal financial services, such as saving and borrowing through an arisan (informal savings groups) or borrowing from other informal sources such as moneylenders.

Siti Nurmajid from Selayar, South Sulawesi organised an arisan in her village, and explained that “With an arisan, I can meet with the other women in my village regularly. If they saved in the bank, they have to travel all the way to town.” And it’s not just a matter of travel; Situ Nurmajid adds that with an arisan, she (as a community leader) can better monitor women’s financial behaviour, tracking whether or not women are actually saving, and ensuring that the money saved is used for its intended purposes. These include constructing simple structures that families in her village need, such as toilets and fences, or paying for kurban (the sacrifice feast).

The Indonesian government is keen to expand the reach of financial services in the country, and hopes to increase ownership of bank accounts to cover as much as 75% of adults in Indonesia by 2019. Financial inclusion rates, as measured by the Financial Services Authority, are currently around 68%, up from 59% in 2013. The increase is impressive, but also underscores the rather ambitious nature of the 75% target. The Director of Financial Services and State Owned Enterprises at Bappenas, Dr Muhammad Cholifihani SE, has stated that, in the long-term, financial inclusion will only be achieved if most people are able to access and benefit from various formal financial services: “Inclusive financial services should be easy to find, but also provided to consumers in a timely and easy manner, safely and at an affordable cost.”

In order to meet the financial inclusion targets, it will be important to consider developing financial products that cater to the particular needs of women. If women are acting as (hidden) household financial managers, shouldn’t they therefore have their own bank accounts? In principle, the answer would be ‘yes’, as ownership of bank accounts (as opposed to having husband-approved access) would allow women to exercise greater control over household finances, including making decisions on household savings. However, a deeper understanding of household dynamics and cultural norms is required before assuming this as a practicable proposition – or that women would indeed want to own bank accounts themselves, independent of their spouses. In any development, it will be essential to keep both social and economic contexts in mind and in balance.

What these findings do clearly suggest is that, in order to understand how money is used or spent in households, women are critical actors to engage with. This information on household income and spending can be important when designing financial products – whether these be savings, micro-credit, insurance, or payment services. For example, when appraising whether to extend a loan (e.g., a housing or small business loan), financial institutions should be encouraged to include women or consider their involvement in the appraisal process given their role as household financial managers. It will not be surprising to hear more of Indonesian women seconding what Ibu Theresia said, “It’s better if I keep the money, because I’m good at managing things.”

Abigail Carpio is a Senior Consultant at Oxford Policy Management.

Abigail Carpio
Abigail Carpio is a Senior Consultant for Oxford Policy Management, working in OPM’s office in Jakarta, Indonesia. Abigail has extensive field experience in the study of markets and financial systems in a range of countries in Africa, Asia and Latin America. She has carried out in-depth analyses of different types of financial institutions, including commercial and savings banks, non-bank financial institutions, cooperatives and credit unions, NGO microfinance initiatives, and informal groups. Abigail’s work includes a strong focus on rural and agricultural finance.