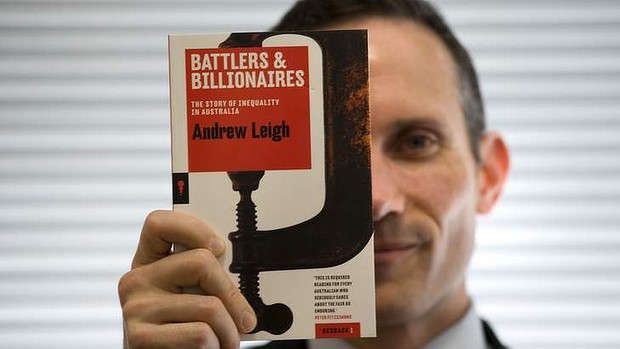 Inequality: should developing countries be worried? An interview with Andrew Leigh MP

By Jonathan Pryke and Andrew Leigh

Andrew Leigh is the Federal Member for Fraser and Shadow Assistant Treasurer. Before his time in federal parliament he was a Professor of Economics at the Australian National University. Andrew has a keen interest in inequality, publishing Battlers and Billionaires in 2013. Jonathan Pryke sat down with Andrew last month to talk about inequality, and its role in development. You can listen to a podcast of the discussion here, and read the full transcript here. For a summary of their discussion, read on.

I began by asking Andrew why he sees inequality as such an important issue:

I think inequality is a public good… I’ve always liked the John Rawls Veil of Ignorance way of thinking about this, where he asks you to imagine what sort of an income distribution you’d want if you were in utero and about to be born into a society where you didn’t know if you’d be born into the top 5th or the bottom 5th. Would you want the kind of Australia where the top 5th has 62% of the wealth and the bottom 5th has less than 1% of the wealth? If you knew that there was an equal probability of you ending up in either of those two quintiles, would you maybe want a more egalitarian distribution of income?

Andrew has been in the public recently discussing inequality in The Monthly with reference to Thomas Piketty’s recent bestseller. I gave him the unenviable task of providing a brief synopsis of Piketty’s work, which has taken the world by storm:

First of all, there’s something thrilling to me about the idea that in the age of Twitter a 700-page hardback book by a French economist can take the world by storm. There’s hope for our public conversation yet!

Thomas Piketty was the founder of the approach of using taxation statistics, national accounts and population data together to estimate top income shares… And Piketty essentially uses those data and a host of others to map out why inequality fell so much in Europe from the 1800s to the 1900s, and why it’s risen principally in the Anglo-Saxon countries in the past generation. He focuses on the role of capital, and he talks about what he calls the Iron Law: that the rate of return on capital, the percentage gain that you get if you’re the owner of a house or a bundle of shares, tends to be greater than the overall rate of growth in the economy.

So, he says, when R > G–when the rate of return on capital exceeds the growth rate–then societies will tend towards inequality. I think this is an important theory. It’s really important to think about capital shares. But for countries like the US and Australia, it doesn’t explain the bulk of what’s gone on over the past generation, which is actually to do with rising dispersion in wage incomes. The gap now between what an anesthetist earns and what a cleaner earns is significantly higher than it was in Australia a generation ago.

We moved on to discuss why inequality has become such an important part of the zeitgeist since the Global Financial Crisis in 2007. Andrew sees the GFC as triggering greater awareness of inequality in Australia:

… because it is like watching the grass grow on one of those super-fast forward movies … people can just see around them that Australia is becoming more unequal than it used to be.

Andrew attributes the rise in inequality in Australia to three main factors: the rise in “superstar” labour markets (i.e. CEOs and senior management now being drawn from a global marketplace); the collapse of union density in the Australian workforce; and cuts in top tax rates.

Steering the conversation to inequality in the context of international development, I asked Andrew whether developing countries should be worried by the trend of increasing inequality?

Yes, absolutely. And I think it’s most pronounced in China, where you’ve seen very large increases in inequality, and where some of our early analyses of inequality have somewhat understated the extent of inequality because the surveys have been based in urban China.

… as inequality rises, it’s again that thing about the gap between the rungs in the ladder. Big gaps between the rungs in China will make it very hard for young Chinese that are born into modest circumstances to really make it. That’s why you’re seeing some of the pushback against the ‘princelings’, for example–a frustration among ordinary Chinese that the game is rigged against them.

That’s just the story of one developing country, but I think similar observations can be made about inequality in a range of other developing countries. The work that Pierre van der Eng and I have done estimating top income shares in Indonesia, for example, was partly us pushing back against the World Bank view that Indonesia’s growth had been highly egalitarian.

Australia is hosting the G20 this year. The C20 (the community sector’s advisory group to the G20) made inequality a feature of their final communiqué [pdf] in the lead-up to the G20 meeting in Brisbane in November. I asked Andrew whether he thought inequality was a topic that the G20 should be tackling:

Absolutely. These are important challenges. They certainly have an international dimension. The question of base-erosion and profit-shifting by multinational companies is fundamental. If you can fairly tax multinationals, then you will be better able to manage inclusive growth within your society. You won’t then need to cut back on pensions, for example, because you’ve lost $1B of revenue to multinational profit shifting.

Andrew Leigh is the Federal Member for Fraser and Shadow Assistant Treasurer. Jonathan Pryke is a Research Officer at the Development Policy Centre.