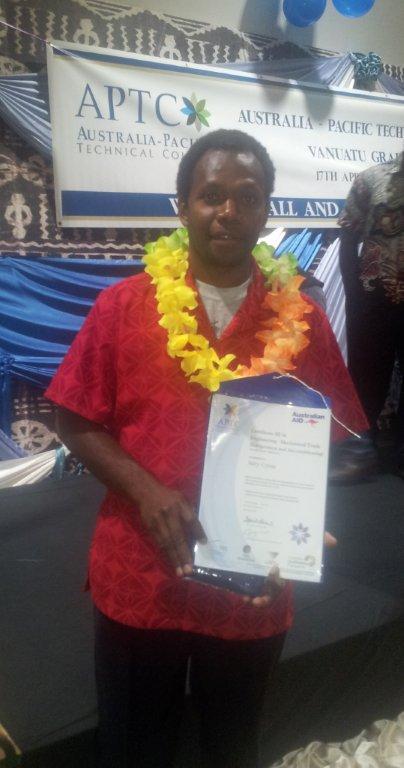 Investing in people and building a business in Vanuatu

I run a business in Vanuatu called Vila Refrigeration. We are an air conditioning and refrigeration company that supplies and installs new equipment and also undertakes maintenance and repair work. Our staff requirement is for personnel who are technically savvy, preferably well trained and in possession of suitable qualifications. The simple fact is that finding personnel in Vanuatu who fill that bill has been virtually impossible. This is not just a problem for me but it is a problem across many types of enterprise.

The majority of the country’s population live in villages outside of urban areas. There are schools for children to attend but these are fairly basic and often lack resources. These shortcomings in the education system in rural areas are also present in urban schools. Secondary schooling is not free and, although school fees are not high by Australian standards, they are a burden on people who are not earning a lot of money. This is more exaggerated outside of the towns, where there is much more of a subsistence livelihood. So for the average ni-Vanuatu child it is unlikely that their education will be of a high standard or that they will be exposed to anything very technical.

When I first arrived in Port Vila in the early ’90s none of the company’s ni-Vanuatu staff had qualifications beyond primary school or lower secondary. The staff received on-the-job training, as there was no other option in our industry. At the time I think there was only one qualified ni-Vanuatu refrigeration technician in the country; he worked for a French company and had received his training in New Caledonia. We had one member of staff who had done a few years at a technical college in Solomon Islands but had not finished the course. In order to meet the technically difficult problems that often arose, we had to employ qualified staff from overseas, which is a much more expensive business than if properly qualified and trained local staff are available.

There was a technical college in Port Vila that taught some trade-type courses (electrical, carpentry, automotive, for example) but the standards were not high. At one time I was co-opted onto a committee to re-write their electrical course syllabus, with a view to making it a basic technical course. In recent years numerous donors have invested in the Vanuatu Institute of Technology (VIT) to improve training standards. In fact, many of our current staff have completed the electrical course at VIT. However, a refrigeration course has never been offered at that institution.

Scholarships to study overseas (whether offered by the government of Vanuatu or donor partners) have largely focused on university education, with very little attention paid to trade training. Teaching people trade skills has historically been left in the hands of local companies.

We undertook on-the-job training and found staff performances improved but it didn’t compare to a proper technical education. If this was to be achieved, the employer would have to pay for staff to do technical studies overseas – not a cheap exercise. Over the last seven years it has been a different story with the establishment of the Australia Pacific Techical College (APTC), which provides access to good technical education. Four of my staff have qualified through the APTC refrigeration and air conditioning course (Certificate III) [pdf] and two others are currently attending. This has been a cost to the company but I believe it has been money well spent.

The APTC refrigeration and air conditioning course is taught in Samoa and is based on a block release type scheme. Each of my staff has received an APTC scholarship, which covers tuition fees and a stipend to live on whilst in Samoa. We paid the staff their standard salary whilst they were away as they all have families who could not have met their living costs if there was no income. Not all companies take this approach but I feel it has helped my staff members to do better by being able to focus on their studies whilst away from home.

Of the first three staff to receive their qualifications (two males and one female) one man has moved on but the other two remain with the company. The fourth to be qualified and the remaining original two have improved their productivity and work attitude immensely. The education they received has not only increased their knowledge and competence but also their confidence in their abilities. All three now have supervisory roles in the company. We have been able to drop two expatriate staff, which has been a significant saving to the payroll. As well as being competent at their jobs, they have also taken on organisational activities including prioritising in-coming work and allocation of staff to jobs. This has allowed me to concentrate on other matters in the company’s operation.

One has been appointed as the Vanuatu National Technician by the National Ozone Unit (a section within the Department of Environment). This is an occasional position and so, in effect, he works full time for us but occasionally requires some time off to undertake those duties. The position oversees and helps with the training of other refrigeration workers in the country regarding the introduction of new technology, particularly relating to new refrigerants. He has recently signed up to do a further course without scholarship assistance. Again we will pay his salary whilst he is absent, and between us we have agreed that the company will contribute to his tuition costs on the basis he remains with the company over the next few years.

We had a few problems with the male staff when our workshop supervisor (as she now is) received her qualifications and was given a supervisory role. The men were not keen to be told by a female what to do; this was particularly so with the older men. I had to put my foot down a few times to get the message across that if she told them something, it was as if the directive came from me. Interestingly enough this gender issue has, for all intents and purposes, now disappeared and the other female technician (who is not qualified) is also accepted as an equal in the workshop. Both of our female technicians were afeatured in the recently released United Nations Environment Program (UNEP) publication: International Standards in Refrigeration and Air Conditioning [pdf] – an introduction to their role in the context of the HCFC phase-out in developing countries. The booklet was published to assist refrigeration companies in the developing world to meet international standards. It was good to see how those pictures were perceived by all the staff as positive for women, and it lifted morale across all the business for them to see their colleagues appear in such a publication.

Spending a little time and money to improve your staff’s access to good educational opportunities will return that investment several times over. I am not saying it will work every time but for me, three out of four (and potentially five out of six) is a great return. The big turning point for us was that the APTC made technical training available, which was not previously accessible at an affordable cost.

I was listening to Radio Australia a few weeks ago and there was a segment on a recent report on the performance of the APTC in meeting its objectives; in my opinion, in Vanuatu at least, they have succeeded handsomely. It has provided Vila Refrigeration and several other companies involved in the technical trades with qualified staff who can perform. This has begun to fill a gap in the Vanuatu labour pool, enabling the country to rely on its own people. There was some early discussion that once qualified, people would want to move to more developed countries but this has not occurred to my knowledge. I think that most ni-Vanuatu do not want to move to Australia or somewhere else, they want to remain in their own country.

Something I had not really thought of before the staff started working towards their qualifications was that good education opens up paths for personal advancement beyond the immediate goals of the qualification. All of the staff who have been through the course have a wider view of the job and their own lives and expectations. I have been impressed to see them now looking to further improve themselves and their families’ prospects. The two staff who are still studying for their APTC qualifications are also improving their productivity and attitudes as they progress through their courses. Improving the staff’s educational opportunities has been a win-win situation: a win for me as an employer to have trained and better performing staff, and a win for the staff as their income and career prospects have improved.

Bernie Cain is Manager of Vila Refrigeration. This is an edited version of a presentation to the Vanuatu–Australia Business Forum held in Brisbane in June 2014.