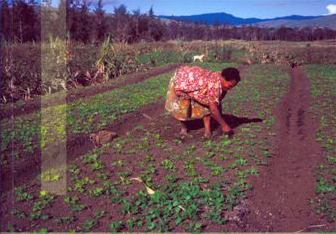 Is there a drought in PNG?

There have been a number of newspaper and other reports of an extended period of low rainfall in parts of the PNG highlands in recent months, including a report on New Zealand radio of children starving to death.

Without an assessment by someone with expertise in climate science and agricultural production, it is difficult to assess the severity of this dry spell. Such dry periods can cause some distress to subsistence and other food producers. However an extended dry period causes less problems for farmers than a drought, when rainfall is very much below the long-term average for several months.

There are claims in PNG for a major drought in 2012. This forecast was made several months ago by a senior scientist at the PNG National Agricultural Research Institute and has received much publicity in PNG. Many people are reported to be very concerned about the possibility of major drought in 2012, with the memory of the 1997 drought and frosts still fresh in the minds of many village farmers. The 1997 drought and frosts (at high altitude) caused great hardship for many rural villagers, with evidence of an increased death rate in a number of locations. The places where the 1997 drought had the greatest detrimental effect on villagers were characterised by remoteness, low cash income and limited ability of villagers to obtain cash with which they could buy imported rice and other other food.

Current forecasts by international scientists about conditions which indicate rainfall patterns, known as ENSO, extend into the middle of 2011. There are no international credible forecasts into 2012. So we simply do not know whether there will be a major drought in PNG in 2012. It is possible that there will be, but one can say this of any year in the future.

Major droughts are not common in Papua New Guinea. The most severe drought in recorded history was in 1997, when about 40% of the rural population were affected by shortages of subsistence food. The other really big droughts over the past 130 years were in 1914 and in 1941. There have been less severe droughts in other years as well, for example, in 1965, 1972, 1982 and 1987. There is no clear indication that the frequency or the severity of droughts in PNG is increasing or decreasing, despite some claims in PNG for an increase in frequency and severity of droughts in recent decades.

There is clear evidence for rapid climate change in PNG, particularly of temperature. In the highlands, many crops are now bearing higher than they did 30 years ago. Given the close relationship between altitude and temperature, with a decline of 5.2 oC for every 1000 m increase in altitude, this indicates an increase in temperature. This is supported by temperature records at weather stations in the  lowlands and highlands.

There is also clear evidence of sea level rise in many coastal locations on both the New Guinea mainland, large and small islands. The evidence for changes in rainfall patterns is less clear. I have recorded statements by villagers throughtout PNG over the past 25 years that rainfall patterns in their area are changing. However, it is not obvious from these statements that rainfall is increasing or decreasing. There is evidence for both increases and decreases in rainfall in different parts of PNG. However longer-term records, and more rigorous analysis, is needed before any conclusions can be drawn about long-term changes in annual or seasonal rainfall at different locations.

R. Michael Bourke is an Adjunct Senior Fellow at the Australian National University. His recent book on Food and Agriculture in Papua New Guinea contains results of many new analyses, including a food budget for the entire nation.