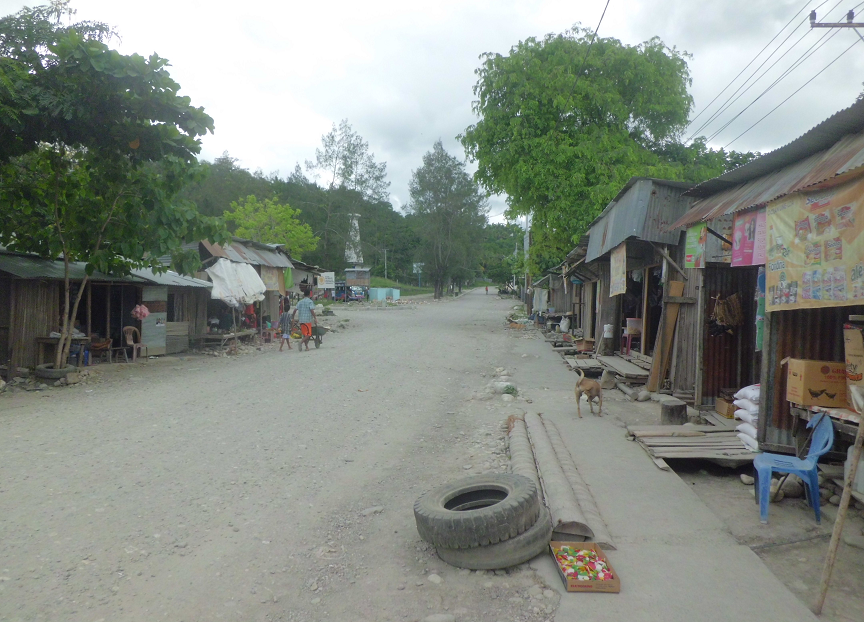 Is there finally hope for Timor Leste’s rural people?

Timor Leste’s Prime Minister, Xanana Gusmao, had originally planned to step down as Prime Minister in September or October 2014, but has now decided to stay on until at least April 2015. Since becoming Prime Minister in 2007, two of his major achievements have been bringing peace to the capital city, Dili, after the attempted assassination of Timor Leste’s President in 2008, and his ongoing struggle to get a fair deal for Timor Leste from its off-shore oil reserves. Through oil money, Timor Leste’s annual budget has increased steadily and its oil fund total now stands at 15.7 billion USD and rising.

However, what is the legacy of Xanana’s government, the 2002-2006 Fretilin government and the 1999-2002 UNTAET administration for the 75% of East Timorese who live in rural Timor Leste? Earlier this year, I travelled to rural Timor Leste to see just how life had changed for rural Timorese since Indonesian times.

It was my first visit to Viqueque since 1997. Viqueque was one of the heartlands of the Timorese resistance in the Indonesian period. I wondered what independence had delivered to the people there. I’d already passed through the towns of Manatuto and Baucau, seeing how little these had changed since my visits of the 1990s. At face value, outside Dili, East Timor’s independence had manifested itself in a better road between Dili and Viqueque, a single ATM machine in Baucau and a renovated church in Ossu.

When I was working for UNTAET back in 2002, I envisaged ‘small town’ Timor in 2014 being something like ‘small town’ Malaysia. Smooth roads, with trucks full of goods travelling between busy market centres, a few air-conditioned buses whizzing by, shops with neon lights open until late in the night, a few well kept public parks and community centres, and a degree of tidiness that showed people’s diligence. I envisaged well organised and active local governments, and signs of growing literacy.

From what I saw and heard, independence has so far delivered none of these things to the people living outside Dili.

To get a sense of economic, recreation and education opportunities in downtown Viqueque in 2014, see this photo, taken mid-afternoon in early 2014. The same photo can also provide insights into the level of vibrancy in local government and community activities.

And just in case you thought that was trick photography, here’s downtown Viqueque, looking the other direction. 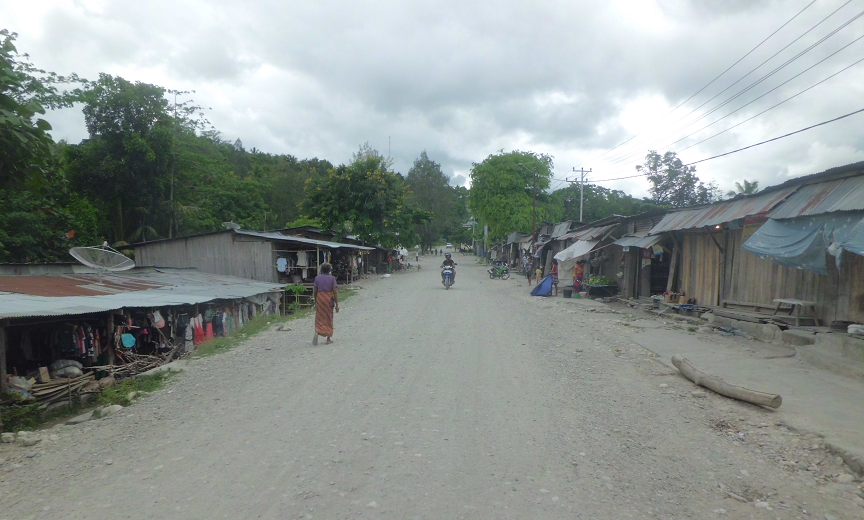 Certainly, there are a few small shops scattered around the outskirts of Viqueque, but you’ve now seen central Viqueque, the administrative centre of one of Timor Leste’s 13 districts.

In small town Malaysia or even small town Indonesia, the number of vehicles, internet cafes, ATMs, and mini-marts has risen sharply in the past 12 years. So have education levels. Outside Dili, I saw just one ATM machine (in Baucau). Vehicles, book shops, book shelves and internet cafes were in short supply. Poverty-stricken West Timor, even in the rural areas east of Kupang, is more developed in these respects than post-independence rural Timor Leste.

Certainly East Timorese people feel freer than when they were under Indonesian rule. No military or police check points like in 1997. Locals now have no concerns about being invited down to the local police station because their name came up in the wrong discussion or in the wrong document. Locals now feel free to express political opinions.

But expressing political opinions in recent years has not yet helped rural people. The demographics of ‘small town’ Timor Leste have become unbalanced since independence. Parents accept that their children will head to Dili as soon as they are old enough, because there are so few employment or education opportunities outside Dili. Recreation facilities and organised clubs are also rare. The main recreation opportunities in Viqueque seem to be unchanged from 100 years ago: bathing in the river, cock fighting and just sitting around on verandahs. The Timorese with whom I travelled had grown up in Viqueque, and acknowledged that Viqueque was more vibrant in the 1990s.

If private enterprise can’t be induced to kick-start development outside Dili, surely Timor Leste’s government can. Timor Leste’s government has budgeted 1.5 billion USD for 2014 and 1.57 billion for 2015, equating to around USD 1,300 annually per person in the country. That’s far below the current Australian national budget, which at AUD 412.5 billion equates to about USD 15,000 (AUD 17,500) per person. However, it’s double the current Indonesian government spending per capita, which at Rp 1,876.9 trillion per year equates to about USD 650 per person.

Are rural East Timorese getting value for this 1,300 USD per person?

The answer seems to be ‘not yet’ but ‘maybe soon’. The government has restored the education, health and electricity services that were available in Indonesian times, but very little seems to have been spent on rejuvenating the economy. That may now be changing. Timor Leste’s Minister of State Agio Pereira recently reminded us of big plans for government-funded development along Timor Leste’s south coast, with “the construction of a supply base, refinery, and natural gas liquefaction plant, as well as a seaport and three regional airports, the first of which will be ready in 2016.” The extent of this infrastructure development will no doubt depend on whether the operators of the Greater Sunrise oil and gas field in the Timor Sea can be persuaded to build a pipeline to Timor Leste’s south coast. Pereira also forecast the development of 2,500 acres of hinterland for agriculture and agroforestry and issuing of permits for on-shore oil drilling.

New opportunities are also emerging for rural Timorese elsewhere around the country. I travelled the road from Dili to the West Timor border and found that, through an ADB grant, it had been greatly improved. In particular, the drainage catchments were deeper and the landslide prevention walls seemed stronger and more extensive than anything I saw in Indonesian or UNTAET times.

There are plans to develop the small jetty at Tibar, a few kilometres west of Dili, into a commercially viable container port. Then there’s the ambitious government investment in the Oe Cussi Special Zone of Social Market Economy, designed to create conditions attractive to tourists and foreign investors. A lot of the action is still just on paper, but finally some attention seems to be being paid to rural Timor Leste. Perhaps more attention than at any time since Portuguese colonisation.

If everything goes according to plan, economic activity outside Dili will finally start growing in the next few years. Such economic growth could have important flow-on effects. Dili is currently crowded with job-seekers from rural Timor Leste. Improved economic opportunities outside Dili could induce these job-seekers to return to their rural homes, thereby easing some mounting pressures in Dili, like high unemployment and rising land prices. If rural towns can grow, so too will rural markets, so farmers who were previously operating at almost subsistence level can be induced to produce excess for sale in nearby markets.

There’s no question about the availability of funding to bring Timor Leste’s rural economy to life. The question marks are about government capacity. Firstly, there’s corruption. Xanana has taken serious steps to address this, including establishing the Anti-Corruption Commission and slightly more effective structures for field monitoring of public works projects. Secondly, there’s the challenge posed by the Timorese civil service mentality of enjoying exercising authority over the public rather than serving them. Thirdly, there’s the tendency to promote civil servants based on factors like age and personal connections rather than performance. Fourthly, planning in detail, and following the plans methodically, is a relatively new skill in a country where most senior civil service positions were, until 2001, filled by non-Timorese. Finally, there’s the ever-present risk of internal division, which in recent Timorese history has often been exacerbated by unscrupulous characters.

Within Timorese society, there is the potential to overcome these challenges. During the period of Timorese resistance to Indonesian rule, Timorese demonstrated a capacity for discipline, planning under difficult circumstances, self-sacrifice, and solidarity. Today, a section of Timorese society is wealthier and more educated than in Indonesian times. The challenge is not just to build new capacity but to re-discover and re-direct past capacities.

It’s taken a while but now much of the planning is in place. Much of the required road network is in place. The money’s in place. Rural Timor Leste could soon have bustling roads and marketplaces, shops with neon lights, and plentiful opportunities for work, education and entertainment. If Timor Leste’s government can find sufficient discipline, eye for detail, service orientation and solidarity, it could just pull this off. Only then will rural Timorese taste the true benefits of independence.