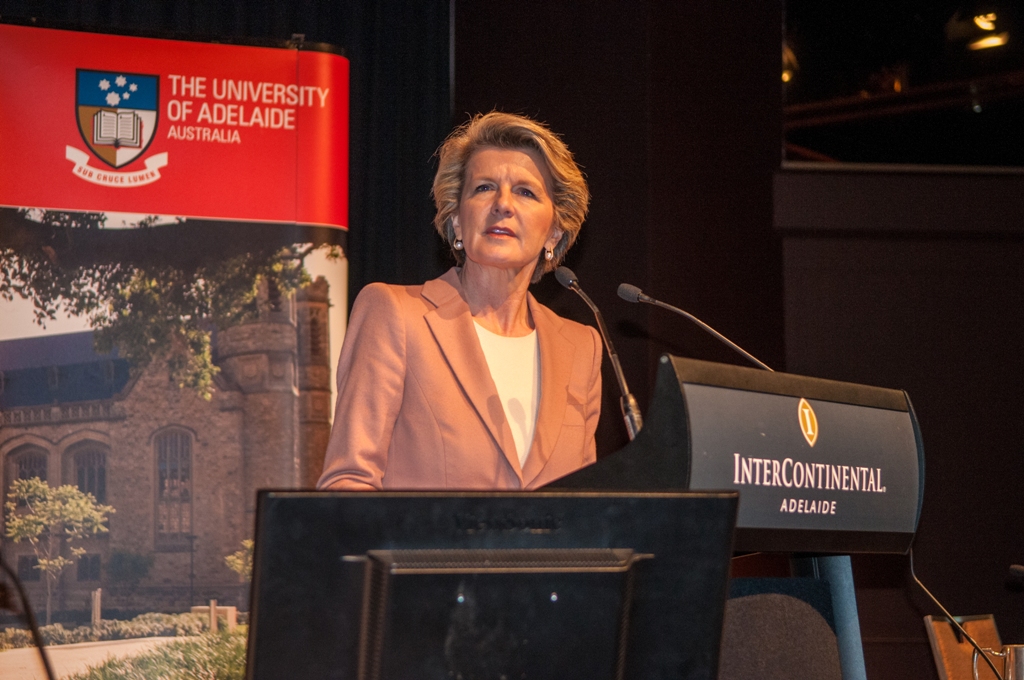 In an important policy statement, Julie Bishop has signalled her desire to shift from the regional PACER Plus approach to economic integration in the Pacific to a more bilateral, selective approach.

The Shadow Minister for Foreign Affairs and Trade also spoke of her support for the Seasonal Worker Program (SWP), hinting that it could be expanded under a Coalition government.  And she expressed a commitment to continue AusAID’s Enterprise Challenge Fund for the Pacific and Southeast Asia, or something like it.

At the University of Adelaide’s National Dialogue on July 19, Bishop spoke on aid for trade and other economic development initiatives. The transcript is now available online.

While Ms Bishop said that a full Coalition policy on foreign affairs and trade would not be revealed until an election date was called (and there was no mention of a specific policy on aid and international development), she did give some significant insights into the Coalition’s priorities.

Aid for trade would “be a flagship of the Australian aid program”, she said.

“Our commitment to supporting sustainable economic growth in developing countries will tie in closely with our focus on economic diplomacy as an overriding and primary focus of our foreign affairs and trade policy,” she said.

“We will work with partner countries, particularly in the Pacific, to open up new trade opportunities and remove the external constraints that limit their participation in the global economy.”

The Coalition would work to build trade capacity through strengthening regulatory and policy frameworks, supporting education and training initiatives such as the Australia-Pacific Technical College and supporting “productivity enhancing” infrastructure projects in collaboration with other donors, Bishop said.

While Bishop said that she believed the Coalition had the political will to conclude the long-running PACER Plus negotiations, she acknowledged that “little tangible progress has been achieved” and that “fresh thinking is needed.”  Rather than aiming “for an agreement encompassing all Pacific Island Forum countries at once, consideration should be given to signing a higher quality agreement with countries willing and able to do so.”

She argued that this selective approach would “ensure ownership of the reform process by allowing countries to determine the timing of their accession.” Australia can “provide the incentives that are needed to encourage countries to undertake difficult, but much needed reform.”

Several Pacific analysts have long argued that a bilateral approach to integration in the Pacific is far more likely to yield returns than the cumbersome and slow-moving regional PACER Plus approach. The Independent Review of Aid Effectiveness noted “the lack of progress” in PACER Plus, and raised the “more radical proposal” of inviting Pacific countries to join the Closer Economic Relationship (CER) between Australia and New Zealand (p. 135).

While Bishop doesn’t mention CER, this is the first time a bilateral or selective approach has been advocated at the political level.

On the Seasonal Worker Program, Bishop said that she felt the program should be “strengthened to enable a greater number of Pacific Islanders in particular, to undertake seasonal work in Australia. The same applies for workers from PNG and Timor-Leste.” Saying that she had just returned from Dili, she noted that “[Timor-Leste’s] participation in Australia’s Seasonal Worker Program is taken very seriously with rigorous vetting of all participants. Citing the success of New Zealand’s scheme, she argued that “while significant challenges remain to expanding Australia’s Seasonal Worker Program, the potential benefits would make that effort worthwhile.”

On the Enterprise Challenge Fund (ECF) for the Pacific and Southeast Asia, established in 2007 to provide matching grants for pro-poor business projects, she reflected on her personal encounter with one of the fund’s projects which supported the export of coffee, herbs and spices from PNG. She also noted its positive mid-term review in 2009 which she summarized as saying that the ECF “was a success and will pass any key performance benchmarks that I would establish to judge our aid program against.” She also flagged possible support for business mentoring programs, and regional investment roadshows, and signalled strong support for the International Finance Corporation (the private sector arm of the World Bank Group) and the Asian Development Bank’s private sector operations.