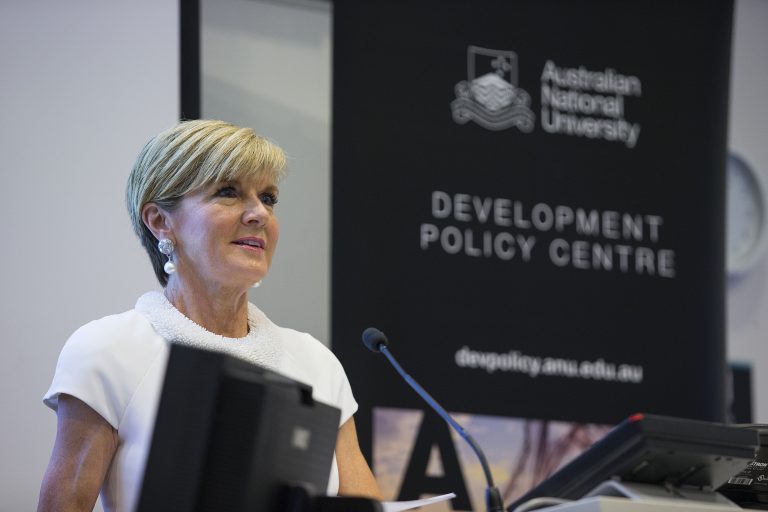 True to form, assessments of Julie Bishop’s five-year stint at Foreign Minister, which ended at the weekend, have said little about her role at the head of Australia’s four billion dollar aid program. Yet, for a small country like Australia, lacking in superpower status, the aid program is probably the main instrument by which a Foreign Minister can exercise influence.

To say that Bishop will not go down in history as good for aid is an understatement. She presided over the largest and the most number of aid cuts by any Foreign Minister. As Shadow Foreign Minister, she supported the bipartisan target of getting aid to 0.5% of GNI. As Foreign Minister, having abandoned that commitment, she started with at least the promise of protecting the aid budget against inflation. Instead, as per our latest analysis, she ended up cutting aid five years in a row, by one-quarter in all. Another three cuts are pencilled into the forward estimates, which, if implemented, would take the real reduction in aid to one-third since the Coalition took office.

One can’t place all the blame for this on the Minister, but, to the extent that she fought, she lost. She was in the Cabinet of an expansionary government. Over the same period in which aid was slashed by one-quarter, total spending increased by one-fifth. That’s a bad enough record to disqualify Bishop from the title of Australia’s “finest ever” Foreign Minister.

Bishop also reshaped the aid program. One of the first actions of the Abbott government was to abolish AusAID. It was never clear where this idea came from, but it was one Bishop championed and embraced. It wasn’t good for aid. DFAT took a long time to wake up to the challenges involved in managing aid, and in the intervening years many aid experts left the Department, as aid effectiveness came to be seen to be the least of its priorities. It is hard to make an overall judgement about aid quality, and there are recent signs of improvement, but when we surveyed aid stakeholders in 2015 most thought it had deteriorated sharply.

The Minister was a champion of various aid themes. In the early days she talked about her “new aid paradigm.” We heard less of that in more recent years, for good reason. But Bishop did leave her thematic marks. Her priorities included: gender, the private sector, aid for trade, innovation and, most recently, health security. Some of these will be her legacy, in particular the emphasis on gender. For others, we will have to wait and see.

Her oversight of the aid program was creative but lacked follow-through and rigour. Right at the start of her tenure as Foreign Minster – and indeed even as Shadow Minister – Bishop promised to improve aid transparency. But this received little support within the Department, and, despite the promises, aid transparency worsened. The innovationXchange (iXc) was a good idea, but, as I showed in my review of her flagship initiative, was weakened by its closeness to the Minister, and the fragmentation and spin which followed as a result.

Oddly, for someone who presided over the “deep integration” of AusAID (aid responsibilities are now spread across all five of the Department’s Groups), Bishop established two new dedicated aid units within DFAT: as well as iXc, more recently the Indo-Pacific Centre for Health Security. How long these will survive her departure is unclear. They seem like half-way houses. We argued for a new international centre for global medical research; Bishop put more money into such research but kept its management in-house.

Geographically, Bishop oversaw a retreat first from Africa and then from Asia to focus on the Pacific. PNG once more became our biggest aid recipient, reclaiming the top spot from Indonesia. The share of the Pacific in the bilateral aid program increased from 32% in 2012-13 to 45% currently. Perhaps this was inevitable, given Asia’s rise and competition with China. But it is hard to see the returns on this increased investment, given the difficult environment the Pacific presents for development. PNG in particular was a disappointment. Bishop was no doubt a friend of PNG, but she miscalculated on the economic boom there lasting, and cut back on Australian support for service delivery. You can’t place the primary blame on Australia for the recent resurgence in PNG of malaria and polio, but we certainly haven’t helped.

On development more broadly, Bishop’s legacy is much stronger, and largely for a single reason: Pacific labour mobility. Bishop’s Liberal predecessor as Foreign Minister, Alexander Downer, was implacably opposed to the introduction of a seasonal labour scheme for the Pacific. Credit must go to Bob McMullan and Kevin Rudd for the pilot they introduced under Labor in 2009. But that was a tiny scheme. It would have been easy for the Coalition to leave it to languish, or kill it off altogether. Bishop, however, signalled her support for the scheme while still in opposition, and remained a vigorous champion of it as Minister.

Under her tenure, the Seasonal Worker Programme grew from 1,500 workers in 2012-13 to 8,500 in 2017-18. Moreover, working with DFAT, rather than against as in the case of aid transparency, Bishop was able to push through Cabinet last year a second Pacific labour mobility initiative, the Pacific Labour Scheme, a remarkable achievement given the anti-migration sentiment that has dominated in recent times.

Labour mobility is only going to become more important for the Pacific. Australia still has a long way to go. We are yet to adopt New Zealand’s example of providing a Pacific window in our permanent migration regime. But Julie Bishop will go down in history as the first Australian Foreign Minister to embrace labour mobility for the Pacific. The reverse Colombo Plan might have been Bishop’s favorite project, but the promotion of Pacific labour mobility will be her enduring legacy.