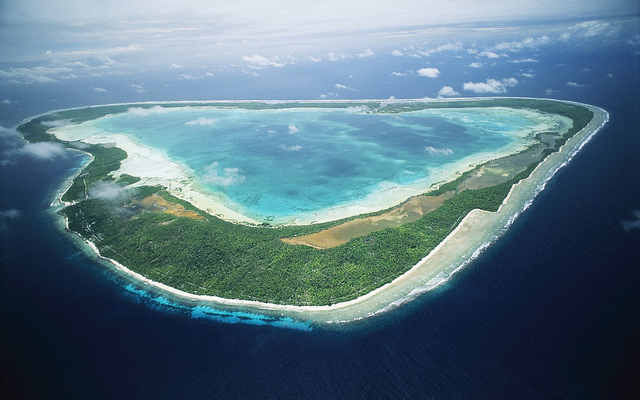 The Kiribati Government sees migration as a long-term climate adaptation strategy. One specific step it has taken is the adoption of a National Labour Migration Policy in 2015.

Kiribati’s development challenges are extreme even by Pacific Island standards. It has very limited natural resources and tourism potential, rapid population growth and a severe lack of employment opportunities (Census, 2010).

There are two groups of countries particularly vulnerable to climate change, “small island developing states” and “least developed countries”. Kiribati belongs to both of them. While sea-level rise is a long-term challenge, Kiribati is already experiencing the adverse effects of changes in rainfall patterns, extreme weather events, and ocean acidification.

In an atoll state like Kiribati, there is no possibility of moving population to higher ground or further inland as a climate change adaptation measure. It is therefore not surprising that Kiribati has been leading the way in international fora in discussing international migration as a response to global warming. The Kiribati Government is concerned with avoiding a situation where a large number of I-Kiribati are forced to relocate as refugees.

The former President of Kiribati, Mr Anote Tong, repeatedly made the point that a relocation of the population will be a necessary but last resort, while emphasizing the importance of education and training in enabling citizens to ‘migrate with dignity’ Migration can increase resilience to climate change by providing households with a new source of income while simultaneously decreasing the strain on limited resources as a consequence of the reduced population in source communities.

Despite the dire situation in Kiribati, there have been few migration outlets for its population. In contrast to several other Pacific island countries (PICs), Kiribati has not benefitted much from labour market access to Australia and New Zealand as clearly demonstrated in the World Bank-ANU Pacific Possible labour mobility report.

The Kiribati NLMP was developed with technical assistance from the International Labour Organisation, under which I was engaged to assist drafting the Policy. It was adopted by the Government of Kiribati in 2015. Its long-term vision is to “provide I-Kiribati with increased opportunities to migrate with dignity by accessing decent work opportunities abroad”. Four policy areas have been identified:

It is too early to say whether the NLMP will be successful in enhancing labour migration from Kiribati. Ongoing Government commitment and sufficient financial and human resources will be required.

The Government recognises that improving the quality of training in Kiribati and offering internationally recognised qualifications is necessary for accessing more overseas labour market opportunities. This is an area where some improvements have already been made. The NLMP also recognises that internationally recognised qualifications often do not translate into overseas employment. Other important factors include English language and general workplace skills, contacts to employers, and competition from other labour sending countries. The NLMP therefore recognises that an integrated approach is therefore required that addresses technical, English language and general workplace skills, links training provision in Kiribati with employment opportunities abroad, and the active promotion of I-Kiribati workers. It requires strategic long-term planning by the Government as expressed in the NLMP.

As its closest developed neighbours, Australia and New Zealand have a special responsibility in supporting the Government of Kiribati’s efforts in creating opportunities to migrate with dignity. In particular this could include the following: