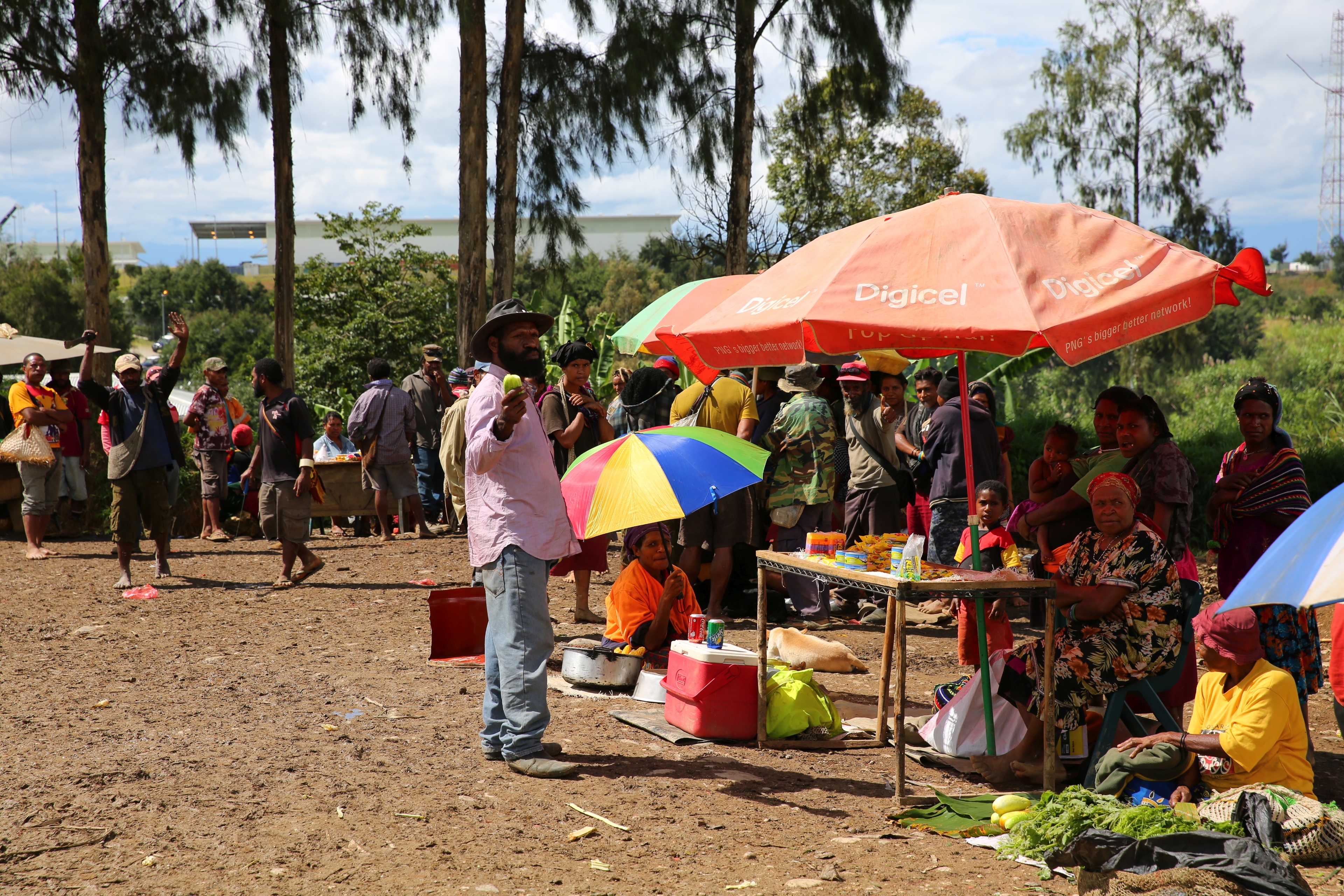 From business development to protection money: landowners and the PNG LNG project

Recent discussion of the Papua New Guinea Liquefied Natural Gas (PNG LNG) project has stressed the time lag between promises of financial returns to local landowners and actual receipt of those benefits. Landowners complain that money promised in 2009 as Business Development Grants (BDGs) and Infrastructure Development Grants (IDGs) has not materialized and that royalties have not been distributed despite the fact that gas has been shipped to Japan, China and Korea since May 2014. There are ambiguities of reporting, and complications of a legal nature, with respect to all categories of expected benefits. In this brief essay we explore details of just one of those categories – BDGs. We suggest that assertions of non-payment of BDG money misstate the facts, that most of the allocated money has been disbursed without a record of recipients, amounts paid or outcomes and that, in recent claims for payment, aggrieved landowners have reconstructed the purpose for which those funds may be used and constructed arguments in ways that imply that payments should be repeated through time.

In late April 2009, an Umbrella Benefits Sharing Agreement meeting for the PNG LNG project was convened at Kokopo, the capital of East New Britain. It was attended by representatives of national, provincial and local governments and delegates from each of the licence areas that were part of that project. In broad terms, it was agreed that the project should proceed and the agreement outlined ways in which various monetary benefits would be distributed. Among the listed benefits, the State would allocate PGK120 million for BDGs. This money would be accessible to companies that project-area landowners had registered with the PNG Investment Promotion Authority (IPA), and that had submitted an approved application. By contrast, royalties were to be paid to land-owning clans that had been recognised by the State and registered as Incorporated Land Groups. In subsequent local-level development forums, the total allocated as BDG money was distributed among licence areas such that, for example, Petroleum Development Licence area 1 (PDL 1, part Hides) was allocated PGK20 million, Petroleum Retention Licence area 12 (PRL 12, later PDL 7 and known as Hides 4) was allocated PGK15 million and PRL 11 (later PDL 8, Angore) was allocated PGK12 million.

A number of reports through 2010 and later suggested that payments drawn against BDG funds were ‘open to fraudulent dealings and theft by public servants, clan leaders and politicians’ (see here, here and here). One woman, identified as a ‘customary landowner’ from Hela Province, said: ‘The majority of the landowners who should get benefits from the LNG project led by Exxon Mobil are uneducated people living in remote areas. Only a few cunning, English-speaking and literate landowners already managed to win the first cash windfalls by coming to this hotel and negotiating deals under the table with people from the government. Afterwards they just needed to fill out a form and go a few kilometers away in Waigani to the government departments to get business grants worth a few million kina. Very easy! But for those poor landowners who can’t afford to come to Port Moresby and who are not even allowed inside that hotel, reality is slightly different’.

Mohammad Bashir, writing for the Post Courier, provided some details. In June 2010 he reported that ‘several millions of the PGK120 million approved by the Government have already been paid’ and that the Department of Trade and Industry had drawn up a list of landowner companies scheduled to receive a combined total of PGK63.676 million (1 million kina is approx. $A410,000). He noted further that at least five of the nominated companies were not registered with the PNG IPA and, hence, did not fulfill established criteria that guided selection of eligible applicants. These five companies were scheduled to receive PGK6.6 million. Some grants disbursed in September and December 2010 ‘triggered resentment’ and allegations that they ‘were not distributed fairly and that they were used for improper purposes by paper landowners who negotiated them through locked door deals’.

In December 2010, the Department of Commerce and Industry released a revised ‘Final Shortlist for Business Development Grant Payments’. It named 56 companies, associated with five licence areas and the route of the proposed pipeline, that were to receive a total of PGK66.208 million. Companies associated with Angore (PDL 8) were not included in this list although in mid-2010 a grant of PGK7 million had been approved for Angore Corporation. In 2009, Angore Corporation had been named as the umbrella company that would oversee disbursement of BDG funds allocated to PRL 11.

There can be little doubt that money allocated for BDGs was being disbursed in inappropriate ways. How much was inappropriately disbursed and to whom it was given are hard questions to answer. However, in February 2013, Richard Maru, Minister for Commerce and Industry, was reported as saying that PGK107 million of the PGK120 million allocated for BDGs was missing. That money had apparently been disbursed without maintaining records of the transactions. The implication was that, by early 2013, funds available as future BDGs had been reduced to PGK13 million.

In August 2016, men claiming to be landowners of the Hides gas fields blockaded access to the conditioning plant and other facilities. They were deeply frustrated by the failure of government to pay royalties and other promised benefits. They directed particular attention to the money that had been allocated under the BDG scheme, complaining that it had never materialised and demanding that this outstanding matter be rectified. Government officials visited, asserted that as yet unpaid royalties were held in trust in the bank and presented a cheque to the value of PGK20 million to landowners of PDL1 in fulfillment of obligations under the BDG scheme. The cheque bounced. As one landowner said: ‘They promised to pay to the landowners — they even wrote a dummy cheque and gave it to the landowners — but that money was not in the account. They showed us the cheque and they said, you see it, you feel it, you touch it and then they withdraw it and they never pay it to us’.

In January 2018, the Government paid PGK20 million and PGK15 million, respectively, to previously established Hides PDL 1 and Hides PDL 7 Special Purpose Authorities. Though referred to by government officials as ‘money for refreshment’, these were the amounts allocated under the BDG scheme to landowners of those licence areas at the local-level development forums of 2009. There was no reference to the fact that the total of PGK35 million exceeded Richard Maru’s 2013 estimate of remaining BDG funds by PGK22 million. Nor was there any suggestion that these monies had been allocated to particular companies to facilitate development of local businesses. Although there was an initial delay in money reaching PDL 7 claimants, by late June Finance Minister James Marape stated in a press release that the PGK35 million had disappeared ‘into thin air’.

In the minds of Hela claimants it seems that the requirement that BDG funds be directed to the development of local businesses has long gone. For example, in November 2017, purported landowners living in Port Moresby demanded release of BDG monies to ‘offset some of the liabilities that have occurred since we signed that agreement… We thought we would get this money and we have borrowed money, and we bought airfares, accommodations, food, living here in the city because government already promised this money and we thought we would receive this money on time. Now our creditors are after us and we are living in fear in Port Moresby’. And, in January 2018, Hela-based purported landowners demanded release of BDG monies as ‘project security’, to pay compensation for project-related killings and to ‘empower the local leaders and policemen to provide peace among the people’. There was no suggestion in these demands of any intention to develop local businesses.

On 18 June 2018, men claiming to be landowners burned PNG LNG equipment, including an excavator and drilling machine, at PDL 8, Angore. The next day, a different group closed the purpose-built Komo airstrip. The Angore protesters expressed frustration over ‘non-payment’ of BDG money, demanding that they be treated as Hides landowners had been treated and awarded PGK35 million for ‘project security’. In Port Moresby, on 21 June, the leader of a competing group of Angore men asserted that the protesters had no legitimacy as landowners and insisted that the ‘security fees’ should be paid directly to the clans he represented. The Komo airstrip protesters demanded that the airstrip be treated as a stand-alone project, and that a PGK35 million ‘project security’ fund be established for it.

These recent protests by purported Angore and Komo landowners seek equivalence with neighbours who earlier this year received substantial payments from government. The protesting men made no reference to the likelihood that they, the groups they represent, or their neighbours had received BDG money in earlier years. Further, in asserting that the demanded payment should be for ‘project security’ and not for ‘business development’, they lay the basis for arguing that such payments – in effect, ‘protection money’ – must be on-going if security is to be guaranteed. What seems to be emerging, to paraphrase Colin Filer, is a ‘Hela way of menacing the petroleum industry’ – a ‘way of menacing’ with which the State, through failures of accountability, is complicit.

Monica Minnegal
Monica Minnegal is an Associate Professor in the School of Social and Political Science at the University of Melbourne.

Michael Main
Michael Main is a doctoral candidate in the School of Culture, History and Language at the Australian National University.

Peter Dwyer
Peter Dwyer is an Honorary Senior Fellow in the School of Geography at the University of Melbourne.