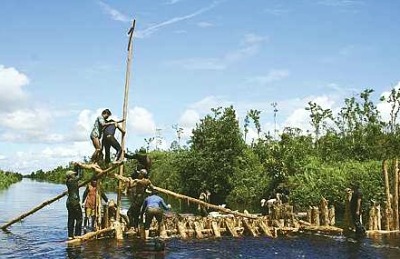 Missing the peat for the trees? A response to the Olbrei-Howes KFCP critique

That an aid activity has not met its original expectations within the intended timeframe is not generally headline-grabbing news. It is in the nature of the business that aid programs tend to be harder and slower than initially expected. So what makes the Kalimantan Forests and Climate Partnership (KFCP) different?

Reading Erik Olbrei and Stephen Howes’ paper on KFCP and some recent media coverage it has generated, KFCP seems to stand out in two ways. There is the large gap between its original targets and its current, scaled-back objectives. And there is the stark contrast between (a) KFCP’s slower than expected progress and limited scope and (b) rapid ongoing deforestation and forest degradation across Indonesia.

The paper makes a useful contribution to the public debate about Australia’s climate finance, and the authors raise valid concerns about both of these issues. However, I believe that some aspects of their assessment of KFCP are overly negative and should be placed in a larger perspective. My reflections draw in part on my involvement in KFCP’s inception and early design phase from 2007-2009 while I was employed at AusAID.

As the paper notes, there were several reasons why KFCP’s original targets needed to be scaled back. First, additional backers – who were originally expected to cover up to 70 per cent of KFCP’s total costs – failed to come on board as initial optimism about REDD+ markets wavered in the wake of the global financial crisis and uncertainty about long-term international climate policy. Second, after the change of government in Australia, KFCP was re-oriented to become a ‘demonstration activity’ intended to feed more explicitly into the UN climate negotiations. Finally, as the design of KFCP got underway, the rough-and-ready estimates that went into the announcement were given a more thorough reality check.

It could of course be argued that more detailed costings should have been undertaken prior to the announcement (though there was a large element of striking while the iron was hot in late 2007, in the lead-up to Indonesia’s hosting of that year’s UN climate change conference in Bali). But all of these reasons for scaling back the original targets were in my view sound. AusAID and what is now the Department of Climate Change and Energy Efficiency (DCCEE) invested substantial and wide-ranging expertise in KFCP’s design. The resulting departures from the announcement were motivated by well-founded concerns for maximising the effectiveness and sustainability of KFCP with the resources available.

In this sense, the impression given by the paper that KFCP illustrates an announcement culture (rather than, by implication, an effectiveness culture) is an over-simplification. KFCP reflects one of the Indonesian government’s highest policy priorities and its design demonstrates a commitment to flexibility, innovation and learning. A more pertinent criticism would be that concerns for effectiveness reflected in the design process were not matched by a ‘transparency culture’ whereby project-related documents, including reviews and evaluations, were routinely published.

The authors rightly highlight this as a significant concern. This concern, moreover, is not unique to KFCP, but applies in varying degrees to the aid program’s broader portfolio of climate change programs and to AusAID evaluations generally. However, it is also worth noting a point not mentioned in the paper: in 2007 Australia initiated a research partnership with the Center for International Forestry Research (CIFOR) that, among other things, enabled CIFOR to include KFCP in a major (and ongoing) Global Comparative Study of REDD+ initiatives.

So has KFCP fiddled while Kalimantan burns? Since I haven’t been engaged in the further development of KFCP since 2009, I’m not well placed to comment in detail on the paper’s assessment of progress in implementation. However, I’ll note that many of the delays cited are common to other REDD+ and aid activities, and that KFCP may be performing considerably better than many of the other officially supported REDD+ activities in Indonesia. Cutting corners on steps such as community engagement or environmental impact assessments would have created unacceptable risks. Instead, I will comment on the authors’ broader assessment that the current approach is not working.

We can all agree that current action is inadequate in the face of ongoing deforestation in Indonesia, and that more resources – as well as a greater sense of urgency both in Indonesia and internationally – are needed to tackle the problem. But does that mean that it is ‘no longer plausible to proceed with REDD demonstration projects … in the hope that a REDD market will come along to allow these to be scaled-up’ (pp.39-40)? There are several reasons for thinking otherwise.

First, while the authors mention Norway’s $1 billion forest carbon partnership with Indonesia (which has materialised despite uncertainty about global carbon markets), they do not mention the much larger target of up to $100 billion a year in climate finance for developing countries that wealthy countries have committed to mobilise by 2020. Even if global REDD+ markets do not materialise in the next few years, Indonesia will be a prominent candidate for likely substantial increases in public funding for REDD+ over the next decade.

Second, since Norway’s announcement we have seen not only the 2011 moratorium on new forest and peatland concessions, but also in January 2012 the issuance of a long-awaited Presidential Regulation on spatial planning in Kalimantan. According to preliminary analysis, the regulation may expand the scope of protected forest beyond the 2011 moratorium. Until newer data on deforestation rates become available that could reflect the impact of these measures, it is simply too early to conclude that “deforestation continues unabated” (p.40).

Third, demonstration activities such as KFCP continue to have an important role to play alongside national-level approaches. Norway’s approach is indicative of the kind of scale needed in order to start turning around systemic drivers of deforestation in Indonesia. And the authors make a strong case for Australia’s future assistance to influence policy change and economic incentives at higher as well as local levels, particularly through performance-based funding.

But this does not mean the KFCP experiment has been misguided. Norway’s approach is not a substitute means of tackling the problem. Rather, national and site-specific approaches are complementary. Indeed the success of national-level approaches such as Norway’s will depend in part on the successful implementation of area-based demonstration activities such as KFCP. Pilots, by their very nature, will be most useful in generating lessons if they target different stages of the REDD+ ‘supply chain’.

While the authors acknowledge that both policy changes and pilots are needed, they conclude that ‘Australia’s restriction of its activities to pilots and technical work, and its lack of emphasis on policies is a weakness’ (p.41). But there is a difference between identifying needs for scaling up future assistance and assessing KFCP on its own terms. Specifically, a clear distinction needs to be made between aspects of KFCP whose success is dependent on being implemented at a larger scale and those that are not.

Actual emissions reduced will be one important measure of KFCP’s success. But the authors’ conclusion that ‘The most that can be hoped for from KFCP under current plans is the tenuous, possibly temporary protection of a relatively small patch of peatland’ (p.40) overlooks other significant contributions that KFCP could make even while operating on a more limited scale. These include: raising the profile of tropical peatland emissions in international negotiations (KFCP is, for example, repeatedly cited in joint submissions to the UNFCCC by Indonesia and Australia); devising replicable methods of measuring peat carbon stocks and emissions; developing credible social and environmental safeguards (arguably a make-or-break issue in REDD+ negotiations); and trialling equitable incentive payment mechanisms that counter the local-level drivers of peatland degradation. That demonstration of some of these aspects may require more time doesn’t in itself imply the entire approach isn’t working.

It is perfectly valid (and indeed important) to undertake a case study of a single demonstration activity, but there are inherent limits to the range of policy implications that can be drawn from it. Whether there are good reasons for becoming ‘more sceptical of the entire REDD undertaking’ (p.42) would require substantially more evidence about the wider context of REDD+ in Indonesia and internationally. Indeed the evidence presented in the paper on the urgency and scale of the deforestation challenge is arguably far less of a reason for Australia to withdraw its assistance (which the authors do not dismiss as an option) than for sustaining – and potentially boosting – Australia’s cooperation with Indonesia on this critical issue.

Whether KFCP will ultimately deliver on its design objectives remains to be seen, and tradeoffs between speed, scale and effectiveness will remain a matter for further debate. But assessing the long-term impact of KFCP will require a fine balance between its limited scope as one of a broader network of demonstration activities and the multiple pathways through which it can inform global REDD+ efforts.