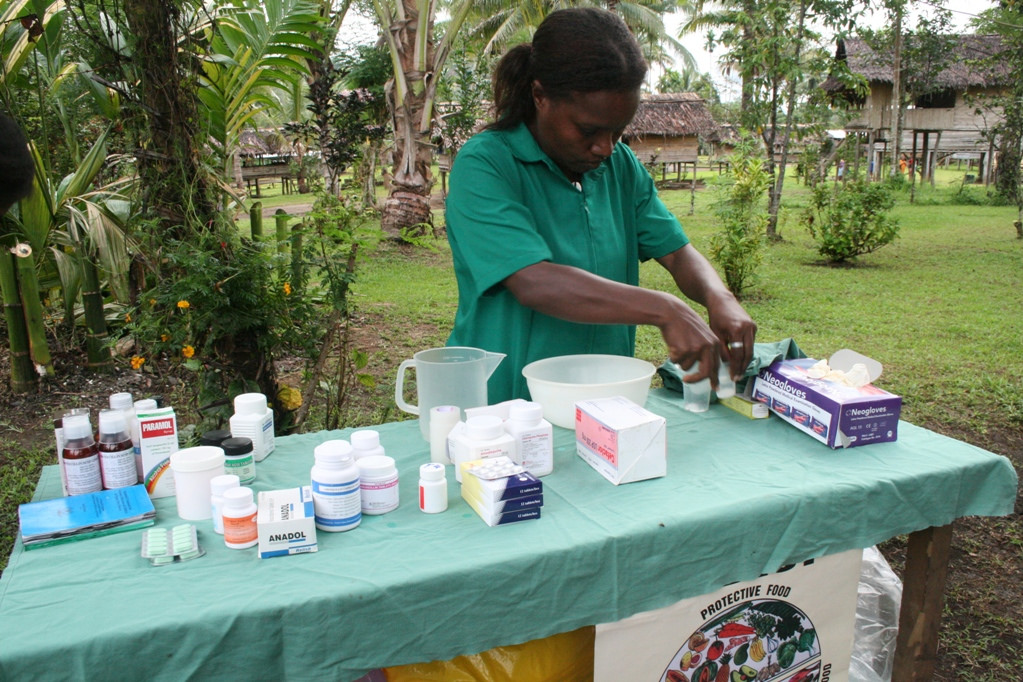 A smart phone a day keeps the doctor away: mobiles and health in PNG

Health services in Papua New Guinea are mainly provided by Community Health Workers (CHWs), who have two years of training provided by Health Colleges, after which they are allocated their aid post roles, usually to rural or remote areas. Encouragingly, many of the young graduates I have had the pleasure of working with are eager to serve the communities of PNG and have a genuine passion for their work. However, once working in the rural aid post, CHWs find themselves battling with an irregular and unreliable supply of health care products, lack of access to continued professional development, professional isolation and lack of support.

The rural communities in which CHWs are stationed commonly have limited electricity, sanitation via dug toileting and water provided by the local creek in which bathing, washing and cooking all take place. Nevertheless, even in the most remote locations one modern gadget seems omnipresent– the mobile phone.

In the past, short wave radio has often been relied upon in PNG, especially to support and connect health care services. One particularly good example is that of Rumginae Hospital where Dr Brandon conducts weekly meetings with workers from 5 health centers and 10 aid posts. Through these meetings Dr Sharon Brandon is able to provide pastoral support, education, medical advice, and collect crucial epidemiological information regarding disease in the region. However this opportunity to converse directly with a doctor is not available for many rural health care workers.

When a woman is laboring, obstructed in the middle of the night, a CHW needs urgent advice – they cannot rely on a nurse or doctor to conveniently be next to a large, bulky and difficult-to-transport radio system. When a small child has an unfamiliar rash and fever – the health care worker worries enough to consider meningitis versus the typical childhood exanthem, but how can they seek a timely opinion via radio when this is a clinical sign best photographed and reviewed? In a country with a limited number of specialists, imagine the immense benefit of being able to call one in their offices in Port Moresby to seek advice, or perform a tele-health consult for specialist expertise which would otherwise never reach these remote areas.

Professor Suwamaru of Divine Word University Madang interviewed health care workers from seven provinces and found that practitioners were using mobile phones for ordering medical supplies, receiving calls from the community about women laboring, using the calculator function to analyse malaria parasite density and transmitting injury photos to colleagues to clinical seek advice. Some workers also reported keeping tallies of malaria incident accounts and texting them for epidemiological purposes, allowing for targeted provision of care to areas battling outbreaks. Many Community Health Workers are also using their mobiles to send information about locations in which they will be conducting clinics or vaccinations so that villagers from surrounding areas can congregate for health care provision.

The key benefits of mobile over radio are portability, accessibility, and future proofing with extended technological capacities. Most PNG families, particularly young people, have access to mobile phones. The paradox of teenagers living without electricity, running water or sanitation, but being able to apply snapchat filters to their selfies is almost comical – but certainly an opportunity which cannot be denied, with the World Bank estimating that 2 million people in PNG now own a mobile.

Mobile phone networks in PNG continue to expand and improve, with companies such as Digicel, BeMobile and Citiphone investing in network expansion. In comparison, the short-wave radio network has fallen into disrepair and requires specific government support to maintain functionality. For example, in Orora Village in the Madang Province only a third of villagers had access to a working radio receiver, but all villages had full phone coverage.

Dr. Jonathan Ritchie says that 80% of the land mass of PNG has mobile coverage, a remarkable feat considering the difficult terrain, dense rainforest and formidable isolation of most areas.  Further, since the introduction of competition into the mobile market in 2007, prices of handsets and calls have plummeted, with the cost of a call falling by 60% by 2016.

A successful example of mobile use in the PNG Health setting is the toll free “Kaunselin Helpim Line,” which provides counselling and advice on family violence, including STIs and HIV, and can be called without any phone credit. Internationally, Danis et al describe the use of the Ugandan Health Ministry SMS reminder system which encourages patients to take medication at certain times – this could be a game changer in the battle against multidrug resistant TB within PNG.

Looking to the future, the mobile, especially the smart phone, may become a way for individuals to carry their health books – which are often presented to health workers in poor condition, with pages missing, or patients losing their books altogether. To have a record of visits, vaccinations, and treatments on the individual’s phone would revolutionise the system, with no need to print thousands of health books yearly.

As the PNG population continues to expand, health care in the region needs to embrace modern technology to meet expanding needs. Rural Community Health Care Workers are indispensable to the provision of care at a grass roots level, and these workers need to be supported, educated, and connected with to provide the quality services Papuans deserve. Mobile phones are the only way we can realistically continue to support these workers in the 21st century, and should be focused on in policy and funding.

Mikaela Seymour
Mikaela Seymour is a medical officer working in Western Province, specifically remote Middle and South Fly villages. She is a member of the Australia-PNG Network and has previously worked for Australian Doctors International and Rural Medical Education Australia in PNG.