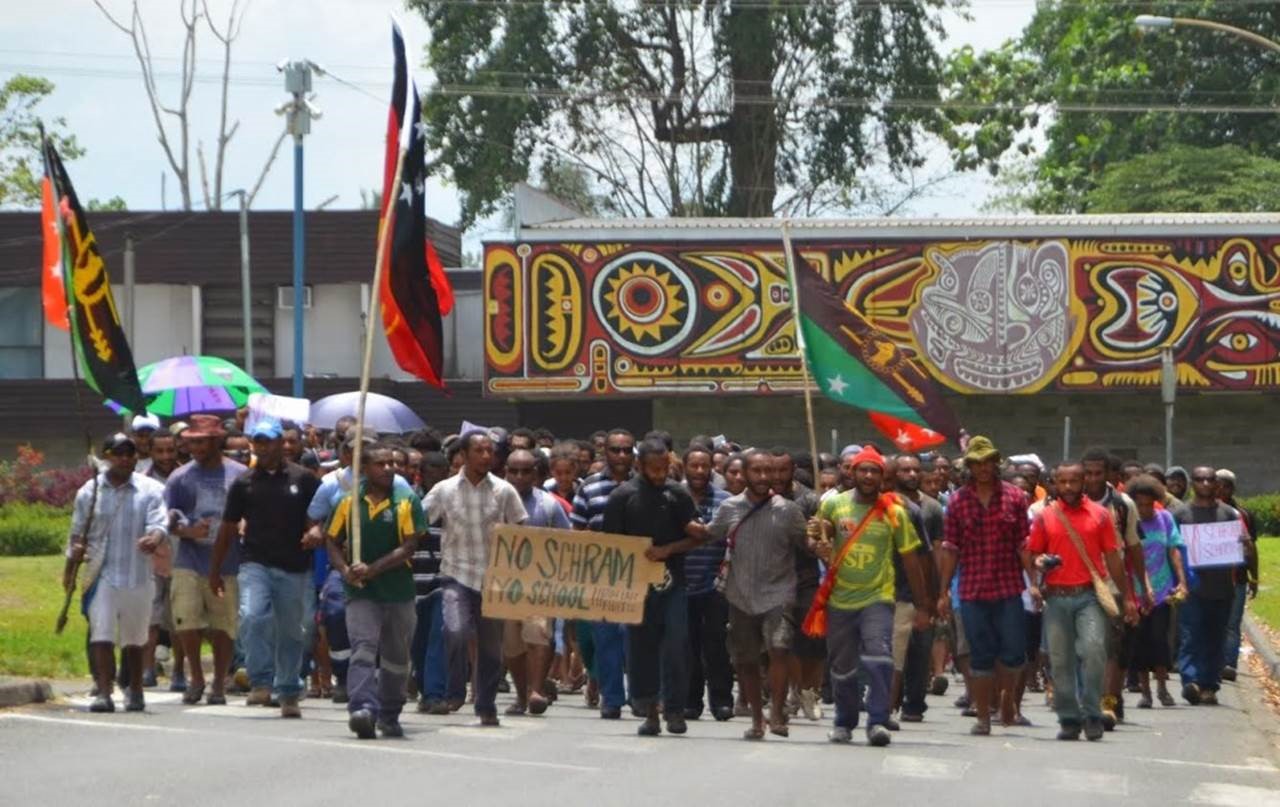 Moving on from PNG’s UNITECH Saga: an interview with Albert Schram

By Albert Schram and Grant Walton

In March 2013, Dr Albert Schram, the Vice-Chancellor of the University of Technology (UNITECH), was controversially deported from Papua New Guinea. Schram’s exile came off the back of his efforts to address mismanagement within the university’s governing council, attracting the ire of university administrators and the PNG government. While Schram spent his exile in Australia’s James Cook University (where he is an Adjunct Professor), a coalition of UNITECH staff, students and others coordinated protests calling for his return. Their efforts saw Schram re-enter UNITECH, on the shoulders of cheering students, in April 2014. These events became known as the ‘UNITECH Saga’.

The UNITECH saga captured both local and international headlines. However, little has been written about the legacy of one of the country’s few successful anti-corruption protests. In a recent interview with Grant Walton, Schram reflected on how both student politics and the university’s administration has changed since his return.

Since he’s been back, Schram stated that there had been no ethnic clashes and, until recently, no boycotts (as explained below, a recent political boycott started after this interview). Student leaders have been engaged by university management through regular monthly “management forums”, where student representatives and staff have a chance to air their grievances and work with management towards finding solutions.

While protesting students helped ensured his return, Schram said he has guided students away from politics and protest. “We try to tell students that real leaders do not only protest. They also graduate to become lawyers, scientists, and teachers who contribute to society”. For those involved in student politics, he warns, “you are not a real student leader unless you graduate”. He believes that students continue to follow this advice and embrace more peaceful methods of protest, in particular through airing grievances on social media.

Yet, he still encourages students to register their concerns directly with politicians. In the lead up to Christmas in 2015, UNITECH was told by the government that there would be a cut of over three million kina (1.25 million AUD) to scholarship funding, which would affect about 320 ongoing students. The Minister of Higher Education, Research, Science and Technology, Malakai Tabar, met with Schram, while concerned students independently called the Minister. The resultant conversations between the Minister, the students and university management led to the Minister backing down. For Schram, this victory reminded students that violent protest is not the only way to achieving their goals, and negotiation can produce better results

Since this interview took place, UNITECH students have joined other PNG universities in boycotting classes to protest the suspension of Fraud Squad Director, Matthew Damaru. They are also demanding that Prime Minister O’Neill resign. The UNITECH student body overwhelmingly voted to boycott classes indefinitely from Monday, 9 May. This suggests that while political activism might be discouraged, it is never far from the students’ concerns.

The nature of UNITECH Council meetings under the leadership of Chancellor Sir Nagora Bogan, has also changed since Schram’s return. The current council has adopted a Conflict of Interest policy, which means members and management must declare their interests at each university council meeting. “Now, those not interested in the university [and are] only [there to] pursue their private interests, don’t show up”, he said.

The UNITECH Saga reminded university management of the importance of meeting students’ aspirations. “If the students don’t have hope that things will get better then they will become unmanageable; this is clear to everyone now.  So we must be seen to be improving services for students”, Schram said. He stressed that management is making efforts to show how it is improving student welfare, and is producing “highly employable graduates”. To this end, in 2015 UNITECH introduced an annual graduate survey to monitor ex-students’ employment rate five months after graduation.

Still, there is a lot to do. Schram notes that he has yet to significantly change the structure of the council and its procedures. He is still working to “institute a statute on how the Vice-Chancellor is elected, and how council meetings are run”. The university is now working to reduce its “bloated payroll with an excessive number of support staff”, and Schram is organising an audit to get a better sense as to what personnel the university has and how resources can be best utilised.

Schram is concerned about what the Higher Education (General Provision) Act of 2014 [pdf] means for institutional autonomy and academic freedom in PNG:

“This act was passed and gazetted in December 2014 without meaningful consultation with PNG Universities. It stipulates the direct appointment by the government of the Chancellor and the indirect appointment of the Vice-Chancellor….this opens the flood gates for political appointments and interference by politicians to further their own narrow personal agendas”.

Re-establishing a national union of students is also on the agenda, but developing and sustaining such an institution will not be easy. Indeed, Schram suggests that the idea scares politicians because they “are worried about students uniting and overthrowing the government…they would rather have students divided”. As the recent nation-wide student boycotts highlight, politicians are well aware of the power of students to agitate for change – so much so that some try to directly influence Student Representative Council elections. But for Schram the risks are worthwhile. Unifying students’ voices, he believes, is essential if student politics is to move beyond the ethnically fragmented cliques that undermine broader debates about academia and development.

Since Schram’s return students have engaged with the government and university management peacefully, but this truce is likely to be tested in June. That’s when the university expects to experience negative cash flows. Schram estimates that UNITECH will need a further 15 million kina to continue its operations this year. “The students know this is the situation, because they are members of the council”, he said. If the government doesn’t fill this fiscal hole he fears that students will again take matters into their own hands. A situation all concerned should be keen to avoid.

Albert Schram is the Vice-Chancellor of the Papua New Guinea University of Technology. Grant Walton is a Research Fellow with the Development Policy Centre.

Dr Schram will present a seminar on university reform in PNG, drawing on the UNITECH experience, at ANU on Wednesday May 18. Find out more and register here.

Albert Schram
Albert Schram is the Vice-Chancellor of the Papua New Guinea University of Technology (UNITECH).