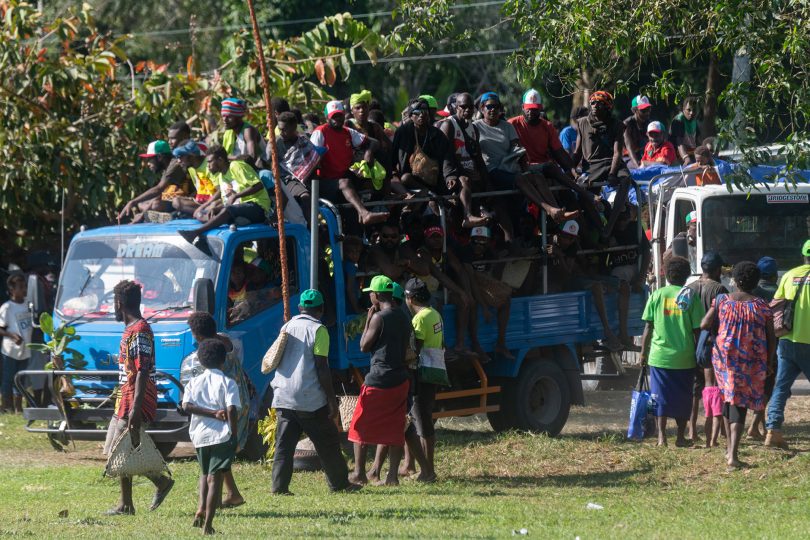 Much of Papua New Guinea’s 2022 elections was predictable: a ramshackle roll, major problems in the Highlands, fewer issues in most other places. But the elections produced one big surprise: 64% of contesting MPs won. As this chart shows, that’s unprecedented. 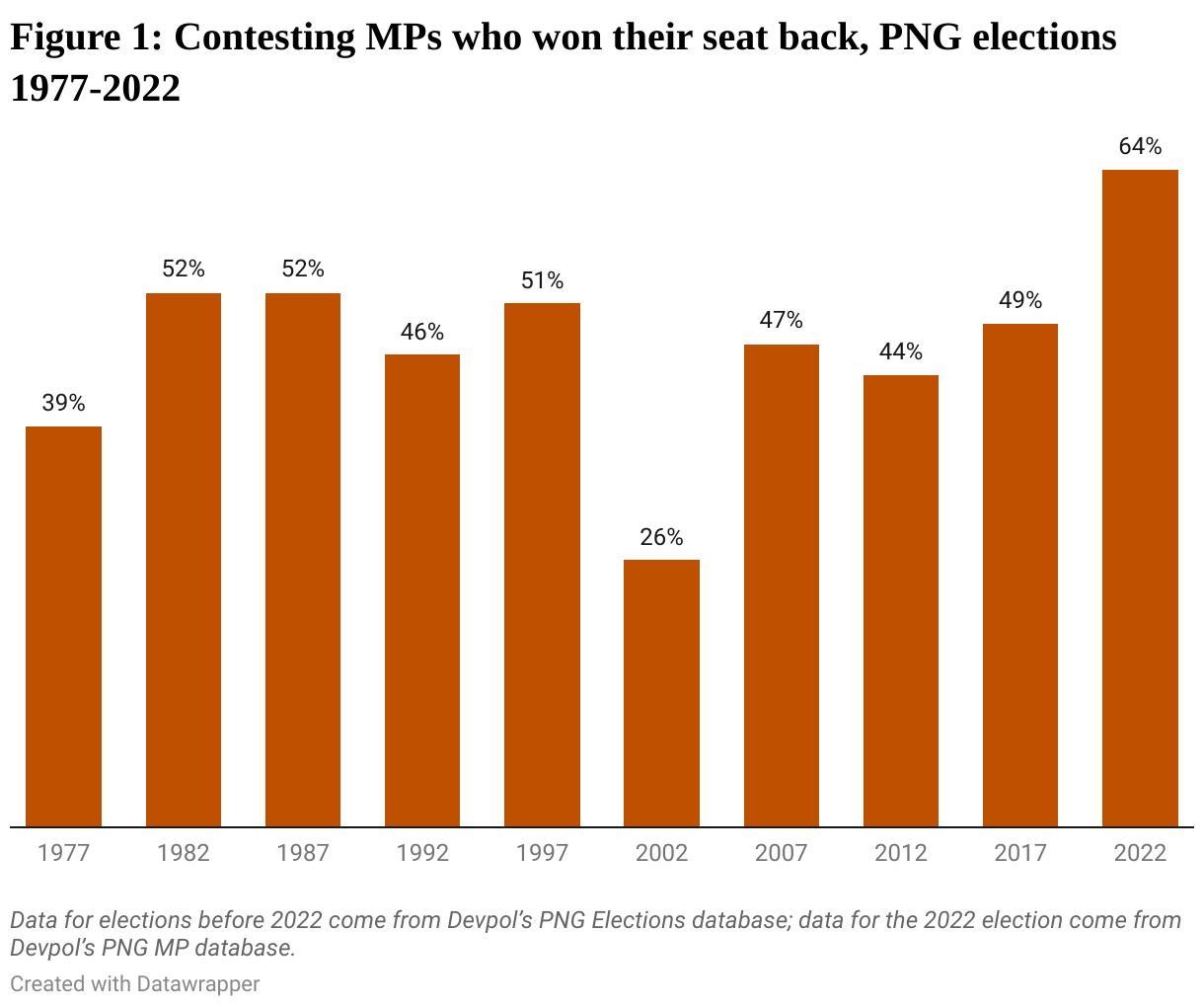 It’s so unprecedented it begs the question, what happened? The other clearly aberrant election year – 2002 – is easily explained: it took place during hard times and amidst unpopular policies. An angry populace turfed out sitting MPs. Similar dynamics don’t explain 2022. MPs weren’t being rewarded for the state of the nation: the economy wasn’t booming, and the government hadn’t implemented popular reforms.

One worrying potential explanation is electoral wrongdoing. The 2022 elections suffered from problems aplenty. Possibly amongst all the trouble, some MPs found a new weakness in the electoral process, which they exploited to win. I say “new weakness”, because candidates have been cheating in PNG’s elections since at least the 1990s and that hasn’t prevented more than half of contesting MPs from losing their seats. So if malfeasance was behind the 2022 result, it had to involve something new – political capture of the country’s national electoral commission, inventive roll manipulation, subversion of the counting process – something no one had thought of previously.

If this had happened, it would be a real concern. If MPs, some of the most powerful people in the country, had found a new way of shoring up their power by breaking the rules, PNG’s status as a democracy would be in danger.

Yet, as I’ve looked at the data more, I’ve started to worry less. The main reason why can be seen in this chart of re-election rates by region. 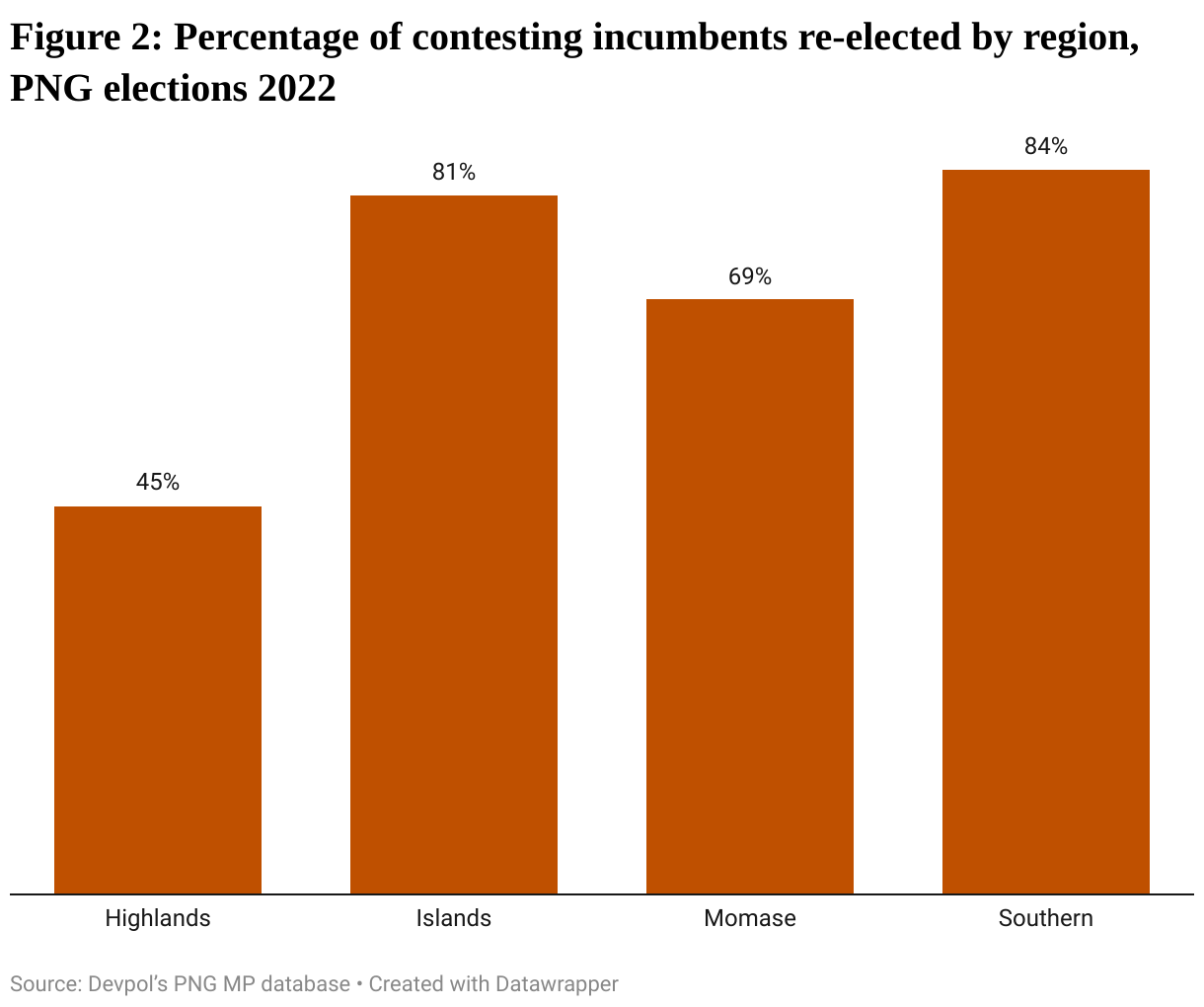 It seems all the more unlikely because the Highlands are home to James Marape, the Prime Minister and leader of PANGU, the party at the heart of government. The Highlands was also the region, along with Momase, that was home to the plurality of PANGU’s MPs going into the elections, as well as the region home to most of PANGU’s MPs (along with Southern) after the elections. If PANGU has a stronghold these days, it’s the Highlands. Yet, high incumbent re-election rates weren’t present there.

My other digging hasn’t unearthed much either. PANGU had a great election, winning 39 seats, which looks suspicious, but as political scientist Russel Yangin showed in a presentation at the recent PNG Update, major political parties have been doing increasingly well in recent elections in PNG thanks to the Organic Law on the Integrity of Political Parties. PANGU’s performance wasn’t unusual considering this recent trend. And success came in part from sitting MPs flocking to PANGU just before the elections: it went into the elections with 39 MPs, eight lost their seats, and eight PANGU challengers won. PANGU ended up with 39 MPs. A good election, but not implausibly good.

Are there other possible explanations for the high incumbent re-election rate?

One seemingly obvious explanation is that seven districts were redistricted – split in two – before the elections. In theory, this meant seven MPs would be able to choose the most favourable new part of their old electorate to contest. However, one of the seven electorates didn’t return results, while two others didn’t have incumbents (they died before the elections). The four remaining beneficiaries of the redistricting won, but four MPs out of 117 is too few to change much. With them excluded, the re-election rate is still 63%.

Another explanation comes from neighbouring Solomon Islands. For a long time only about 55% of all sitting Solomon Islands MPs who defended their seats won them back. Slightly higher than PNG, but not much. However, in the last two elections nearly three-quarters of defending MPs in Solomon Islands have won. Experts are pretty certain why this has happened: the value of constituency funds – money the government gives MPs to spend basically at their will in their electorates – has shot up.

In PNG, equivalent electorate funds – under the District Services Improvement Program (DSIP) – have also increased over the last two decades. However, as the next chart shows, they didn’t increase in the term before the 2022 elections. They were actually slightly more in real terms prior to the 2017 elections. 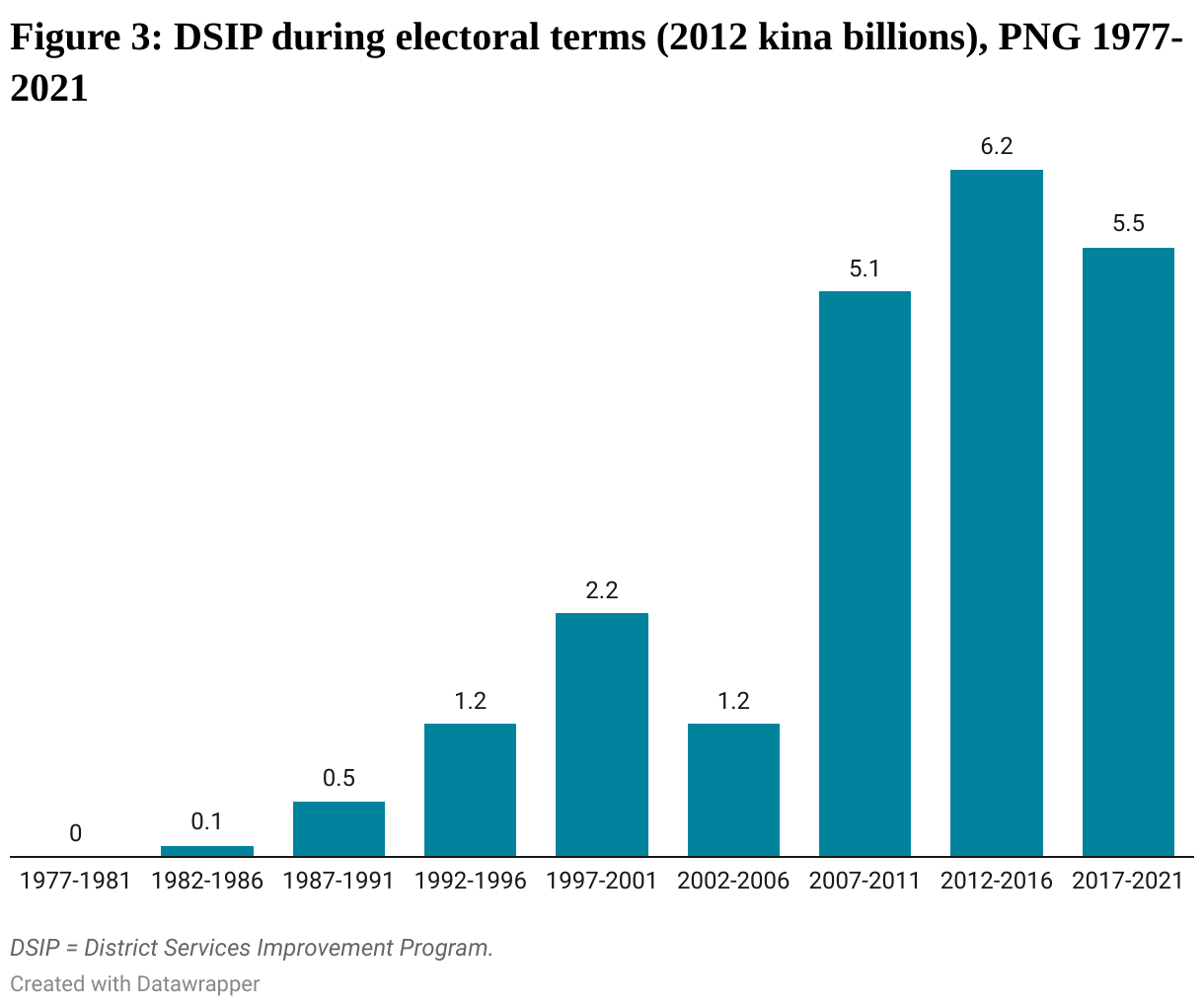 Also, as Maholopa Laveil and I have shown (using data from 2017 and before), in PNG electorate funds haven’t appeared to help MPs win re-election on average previously. It could be the case that more MPs are learning how to use the money more effectively now. I think, however, this would be more likely to lead to a slow trend in increased re-election rates, not a rapid rise. However, the funds remain a possible explanation, although not a likely one.

So why were so many MPs re-elected in PNG in 2022? I’m not sure. As a result, I’m still a bit worried about electoral fraud, even if I don’t think it very likely. Mostly, I think we have a puzzle. One that warrants more investigation, particularly in the parts of the country, such as the Southern and Islands regions, where sitting MPs did so well.