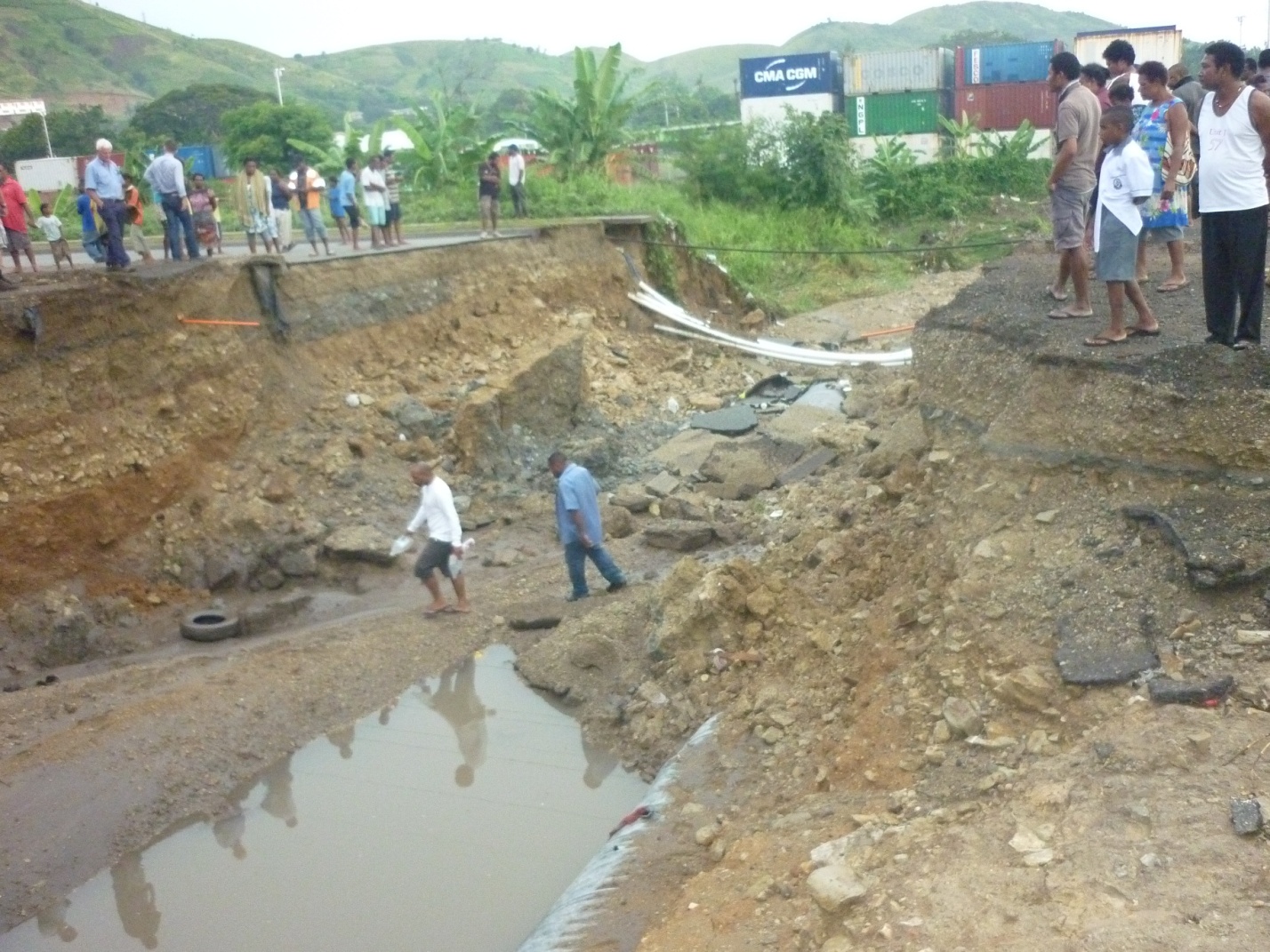 Navigating the potholes that plague infrastructure development in PNG

By Anthony Swan and Matthew Dornan

With the Rudd–O’Neill asylum deal likely to involve a ”realignment” of the Australian aid program toward new infrastructure spending in PNG, the mother of all potholes – one that severed four lanes of Port Moresby’s Poreporena Freeway in March 2012 – is a reminder of the challenges facing infrastructure development in PNG. Although the collapse of Port Moresby’s main road was due to a blocked culvert that was washed away, the underlying cause was a lack of maintenance, poor planning and institutional arrangements, and bad weather – problems that afflict most public infrastructure across PNG. Addressing these underlying problems could bring significant benefits to PNG through better infrastructure and lower costs associated with repairs, rehabilitation, reconstruction, and loss of service. Indeed, the cost of the repairs to the Poreporena was around K5 million (approx. $A2.3 million) and most in Port Moresby will attest to the lost time and income spent in congested traffic resulting from the road collapse.

There is scope to improve infrastructure development in PNG through the government’s Infrastructure Development Authority (IDA), which is in the process of being established by the Department of National Planning (with help from development partners). The IDA proposal came about through the advocacy of former Prime Minister Sir Mekere Morauta. Sir Mekere proposed an independent infrastructure authority that would utilise resource revenues, particularly dividends from the PNG-LNG project, to finance the rehabilitation and maintenance of PNG’s debilitated infrastructure. He argued that his proposal would not only result in greater levels of infrastructure funding, but would combine within the new infrastructure authority the functions of a large number of disparate government agencies that suffer from unclear and uncoordinated responsibilities.

The authority would undertake infrastructure planning, funding and implementation for major infrastructure assets. The operation and associated policy responsibilities for that infrastructure would remain with the government agencies that are currently responsible for those assets. Sir Mekere emphasized the need for the authority to have the freedom to “operate outside of the public sector box” if the poor infrastructure development outcomes over the last ten years are to be avoided.

National Planning Minister, Charles Abel, recently reiterated the government’s commitment to the establishment of the IDA. He said that the IDA would deal with projects valued above K50 million and, it seems, relieve the Central Tenders and Supply Board (CSTB) of its procurement and tender functions for these projects. However, there are many questions that remain unanswered. These relate to the functions that the IDA will perform; its funding mandate; level of independence from government; and transparency, financial reporting obligations and oversight provisions.

Earlier this year we submitted a review of the IDA concept to the Asian Development Bank as part of its support for infrastructure development in PNG. We argued for the IDA to be established as an “apex” infrastructure agency, which would have a broad range of responsibilities and a significant level of independence from the machinery of government. In our view, the IDA should be required to:

Our preference for the “apex” IDA model reflects our view that the alternative, which would most likely involve restricting its function to infrastructure financing and/or review, would do nothing to fix an already broken or at least largely ineffectual system. Fundamental changes are needed to fix infrastructure in PNG. The establishment of an organisation with a narrow set of responsibilities will not suffice.

Inevitably, there are risks that the IDA will under perform due to lack of capacity and coordination, and duplication of roles. The IDA in this context could become another layer in an already inefficient and bureaucratic process for infrastructure development. The key to managing these risks is strong governance arrangements, transparency and financial reporting requirements, regular audit and peer review, and high-level political support. We should also be realistic about the prospects for immediate change. It will take years for the IDA to develop the capacity to effectively carry out a wide range of responsibilities. Transitional arrangements are therefore of great importance.

In terms of governance arrangements, Sir Mekere proposed that IDA management should report to a board of directors consisting of government and independent nominees, but with a government majority. Indeed, we believe that not only should the government have the majority of positions on the board, but that the Chair of the Board should be the prime minister or some other readily identifiable and influential government minister. The idea behind this is to ensure political support and greater accountability by aligning the performance of IDA with the actions of those in the highest level of government. We view this as necessary to avoid a repeat of the experience with the National Road Authority, which was established with donor support, but was never given the necessary resources by government to perform its mandate.

Some people may be concerned that under this proposal, the prime minister and other government representatives would have substantial control over infrastructure development, including planning, procurement and tendering decisions. Yet in the current system, these decisions are made by a multitude of public servants across sector based government departments, SOEs, and CSTB – all behind closed doors and with little accountability or transparency. International experience (in India and South America) has shown that high level political representation on the Board of infrastructure agencies can be a powerful mechanism for achieving real improvements in infrastructure services.

There are some similarities between our proposal for IDA’s governance structure and the recent announcements by Prime Minister O’Neill on the restructure of the PNG government’s petroleum and mining assets and SOEs. These assets and enterprises will be transferred into three new “Kumul” entities that would be overseen by current and former prime ministers. It is hard to evaluate these reforms without further details; not very much information has been released by the PNG Government. And whether government should be investing its time in running commercial businesses is unclear. What is clear is that, as in our proposal for the IDA, leaders need to play a central role in ensuring that government entities are accountable to Papua New Guineans. The success of infrastructure development in PNG will depend on the strength and good-intention of the political leadership. It may be some consolation that if infrastructure development in the long-run does not improve, then at least the politicians can be voted out of office.

Anthony Swan and Matthew Dornan are Research Fellows at the Development Policy Centre.