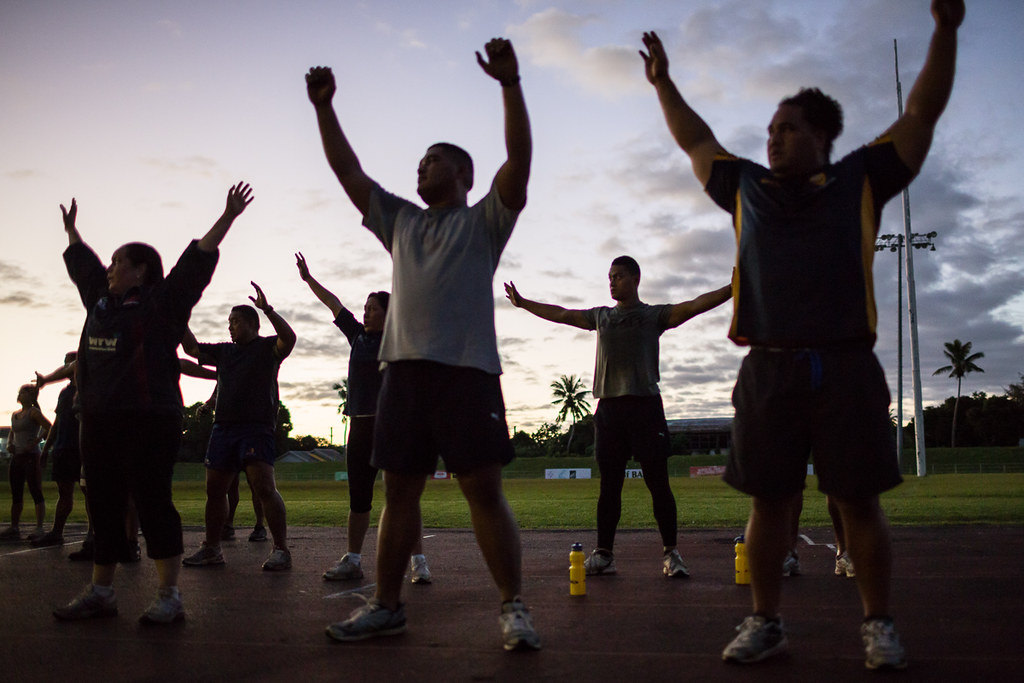 NCDs in Asia and the Pacific: economics, financing and “best buys” for responding

The starting point is that NCDs impose significant – but often preventable – financial and broader economic costs on individuals, households and economies. The recently released WHO report Invisible numbers: the true extent of noncommunicable diseases and what to do about them states that, between 2011 and 2030, the global cost of lost productivity from the four major NCDs – cardiovascular diseases (heart disease and stroke), cancer, diabetes and chronic respiratory disease – is estimated to be US$30 trillion. Adding mental health increases that cost to US$47 trillion.

A recent study published in July 2022 confirmed that NCDs cause significant out-of-pocket, “catastrophic” and impoverishing health expenditure, particularly affecting the poorest quintile. That is due to the frequent complexity and often long duration of NCDs such as diabetes, cancers and heart disease/stroke.

Yet, despite the high health and economic burden, international funding – known as development assistance for health (DAH) – is surprisingly low when it comes to preventing and treating NCDs. The most recent report from the Institute for Health Metrics and Evaluation (IHME), Financing global health 2020: the impact of COVID-19, finds that total DAH for NCDs was US$887 million in 2020. That is just 1.6% of the US$54,828 million global DAH expenditure for that year. This is despite the fact that, as the IHME report says, “NCDs were the leading cause of health loss globally in 2019, causing nearly three times as many deaths (more than 42 million) as communicable, maternal, neonatal, and nutritional diseases, plus injuries, combined” (my emphasis).

Figure 1 shows that, while DAH for NCDs – the red line – has been rising since 1990, it is still the smallest component of the main categories of DAH. The advocacy group NCD Alliance takes up this theme in its most recent report Invest to protect. That report argues that “NCDs receive the least funding relative to the global (disease) burden by a huge margin. To illustrate what they refer to as “the devastating neglect of NCDs by international donors”, they argue that NCDs attract US$0.64 DAH per disability-adjusted life year (DALY, a standard measure combining premature death with disability), compared with US$194 DAH per DALY for HIV/AIDS, and that on this basis “funding for HIV/AIDS is 300 times higher than for NCDs”. 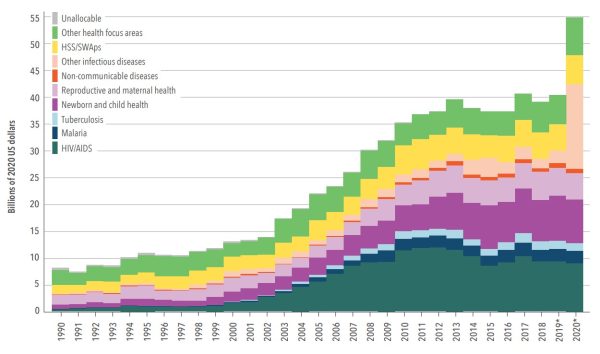 The rapid increase shown in “other infectious diseases” in 2020 includes DAH for COVID-19.

Yet recent reports by WHO, and others, show that investing in the prevention and treatment of NCDs can be technically feasible, affordable, cost-effective – and cost-saving, even in low-income countries. For example, WHO’s report published in December 2021, titled Saving lives, spending less: the case for investing in noncommunicable diseases, presents the updated information on  16 “best buys” for preventing and treating NCDs. WHO estimates those 16 “best buys” could benefit 76 low and middle income countries whose populations total almost four billion – about half of the people in the world.

Table 1 summarises the essence of the latest WHO “best buys”. The first column identifies the six key strategic areas for preventing and treating NCDs. The second column provides an illustrative, practical example out of the 16 identified “best buys” for each strategic area. (Detailed descriptions of each of the 16 “best buys” are given in Saving lives, spending less.) The third column shows the estimated return on investment for each US$1 invested in NCD prevention and control. 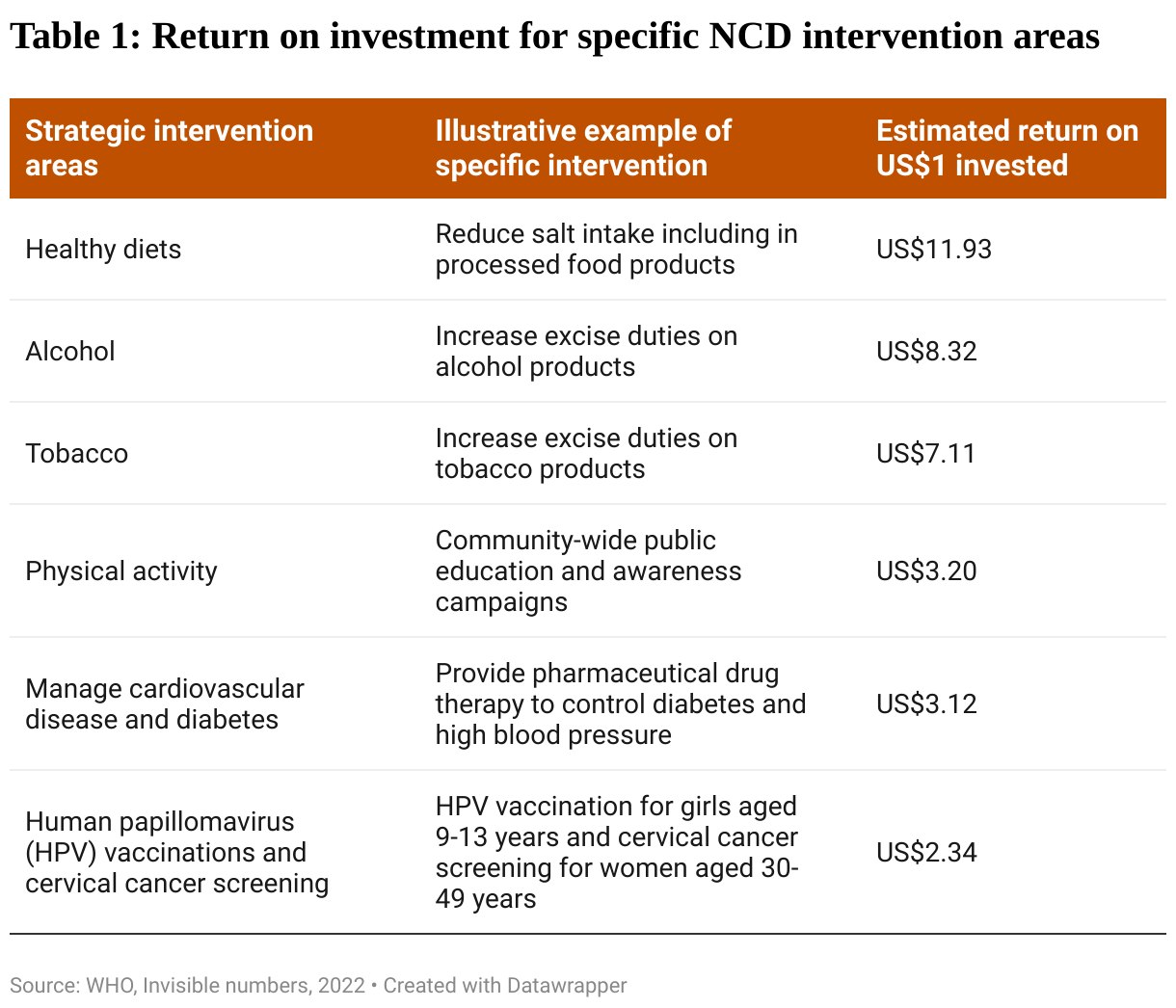 Saving Lives, spending less shows that investing in the “best buys” is a potentially cost-effective way of improving public health and generating economic returns. For example, the report estimates that, for an additional US$0.84 per person per year increased investment in preventing NCDs, there would be seven million lives saved, and 50 million health life-years gained; as well as US$230 billion in economic gains – a return of US$7 on each dollar invested.

Successful early screening and identification of NCDs and their risk factors, and subsequent prevention, also averts significant financial hardship at the individual and household level. The NCD Alliance’s report Invest to protect notes that in lower middle income countries, direct out-of-pocket expenditure on NCDs often exceeds 40% of non-food expenditure. Such “catastrophic” health expenditure has been found to occur in more than 60% of patient populations with cancer, cardiovascular disease, and stroke in some countries due to the complexity and duration – sometimes life-long – of treatment.

The WHO notes that the major risk factors for NCDs are well known but that progress in addressing them is slow. In 2017 governments at the United Nations endorsed a package of policy interventions that addressed the major risk factors for NCDs – tobacco use, alcohol use, unhealthy diets and inadequate physical activity – as well as the need for better  management of cardiovascular disease, diabetes and cervical cancer. The latest WHO Noncommunicable diseases monitoring report 2022 finds only mixed progress in implementing the full suite of NCD prevention strategies. On the one hand, 77 countries have fully achieved more of the 16 agreed policy and program indicators in 2022 compared to 2020. On the other hand, premature NCD mortality has increased in more than 20 mostly low and middle income countries. 54 countries have lost ground, achieving fewer indicators than in 2020. More needs to be done.

In October this year the WHO released another report, titled Global status report on physical activity 2022. That report concludes that “almost 500 million people will develop heart disease, obesity, diabetes or other noncommunicable diseases attributable to physical inactivity between 2020 and 2030, costing US$27 billion annually … There are few areas in public health – such as physical activity – where evidence on required action is so convincing, cost effective and practical”. Of particular concern to the many lower middle income countries in the Asia and Pacific region is WHO’s estimate that the number and proportion of preventable new NCD cases attributed to physical inactivity are highest in lower middle income countries (Figure  2). 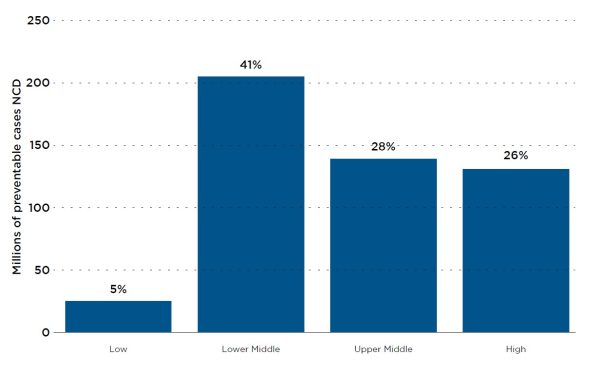 In short, NCDs are a significant health, financial and broader economic challenge, especially for many low and middle income countries in Asia and the Pacific. Recent analysis and data does, however, provide the urgency and evidence needed to take preventive action which is affordable, feasible and effective.