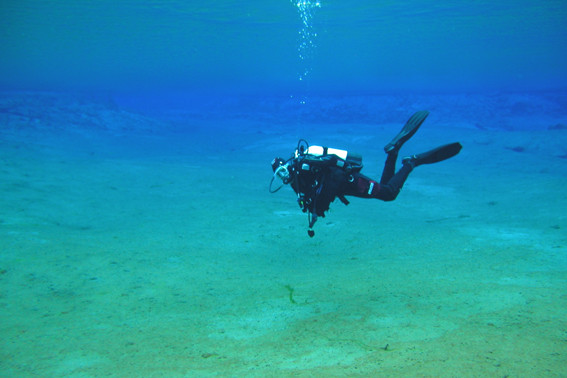 By Robin Davies and Adeline Clarke

Following this week’s budget update, Australia’s aid program will fall from its current level of around $5 billion to around $3.4 billion in three years’ time (at today’s prices), with most of the vertical distance, $1 billion, to be travelled next financial year.

This is unquestionably, as Stephen Howes and Jonathan Pryke have described it, a savage and unprecedented cut. But other OECD donors have also reduced aid in recent years. Isn’t Australia simply following the herd?

Well, no: in 2013 the herd delivered the highest level of aid ever, increasing it by over six per cent in real terms relative to 2013, and in 2014 there are good prospects that this level of aid will be more or less maintained. And that’s not all down to the efforts of one or two star performers, like the United Kingdom.

To place Australia’s leviathan aid cut in an international, long-term context, we have analysed aid flow data held by the OECD. Given reporting and processing lags, those data do not extend beyond 2013, and preliminary data on 2014 flows will not be available until April 2015. So we have made our own projections for 2014. In fact, we’ve made such projections twice before in quixotic attempts to forecast aggregate aid spending outcomes. In 2012, we nominated the right the bottom line but our estimates for some large individual donors were well off the mark. In 2013, we were closer to the mark for most individual donors but failed to foresee the record outcome, thinking aid would probably pause in real terms. This time, we are less concerned about the aggregate outcome and more interested in the likely behaviour of donor sub-groupings—including the ‘US$5 billion club’ to which Australia has recently belonged.

We have taken a stab at individualised 2014 projections for the 15 largest donor countries who, in 2013, accounted for 94 per cent of the Official Development Assistance (ODA) provided by the 28 bilateral members of the OECD’s Development Assistance Committee (DAC). For other DAC members, who provided US$7.7 billion in 2013, we have simply assumed that they will provide the same amount in nominal terms in 2014. Using OECD economic growth, inflation and exchange rate estimates for 2014, we conclude that aid from DAC sources is likely to hold reasonably firm in 2014, perhaps dropping by one or two per cent, or something like US$2 billion.

In 2013 prices, the 2014 outcome seems likely to be somewhere in the vicinity of US$133 billion, as compared with US$134.7 billion the previous year. As a proportion of donors’ combined national income, it could drop a basis point to 0.29 per cent but might not change at all. The chart below tacks our very speculative 2014 outcome estimate onto the actual historical record, extending back to 2000. Our projections and underlying assumptions can be found here. 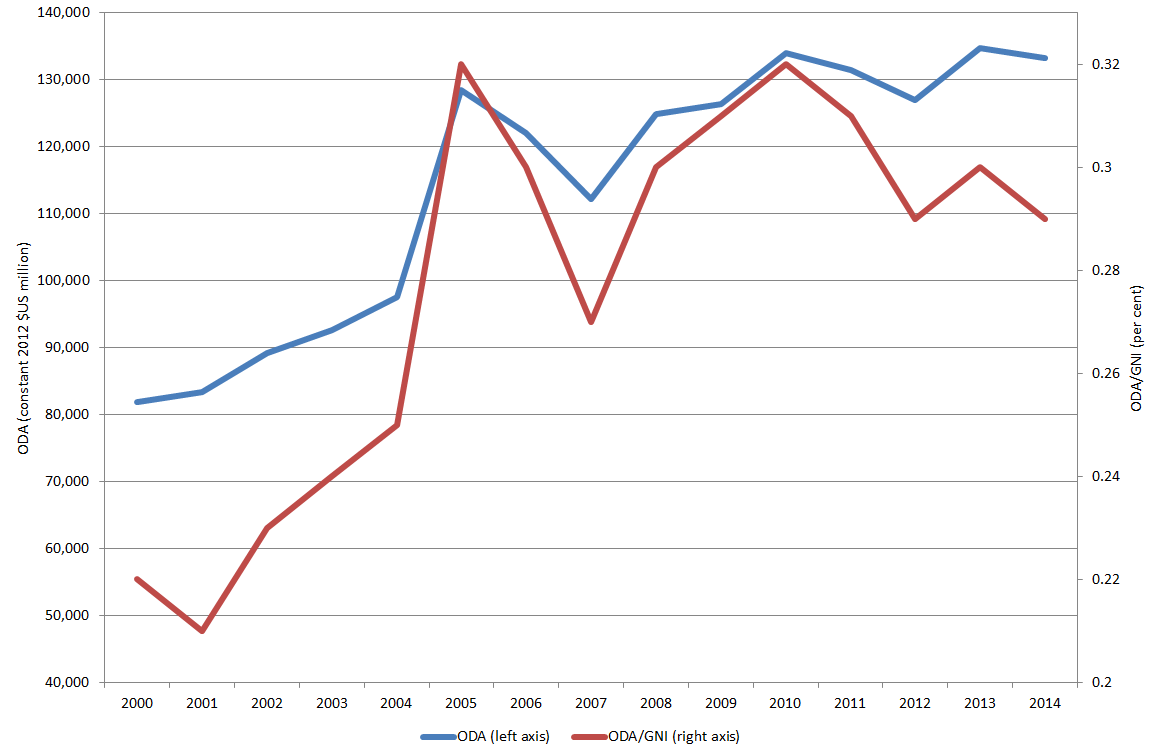 Note and sources: Actuals to 2013, and 2014 projections. Data sources for this and the following three charts: OECD QWIDS, OECD StatExtracts and author estimates based on budget-related information published by the 15 largest donors.

Given the huge margin of error involved in such a back-of the-envelope exercise, owing in part to the volatility of soft-loan aid and debt relief, it would be safest to say that the overall aid spending outcome in 2014 will probably be more or less the same in real terms as it was last year, with ‘less’ more likely than ‘more’. However, more interesting than this is the magnitude and direction of the aid volume changes likely to be exhibited by individual donors within the top-15 group. 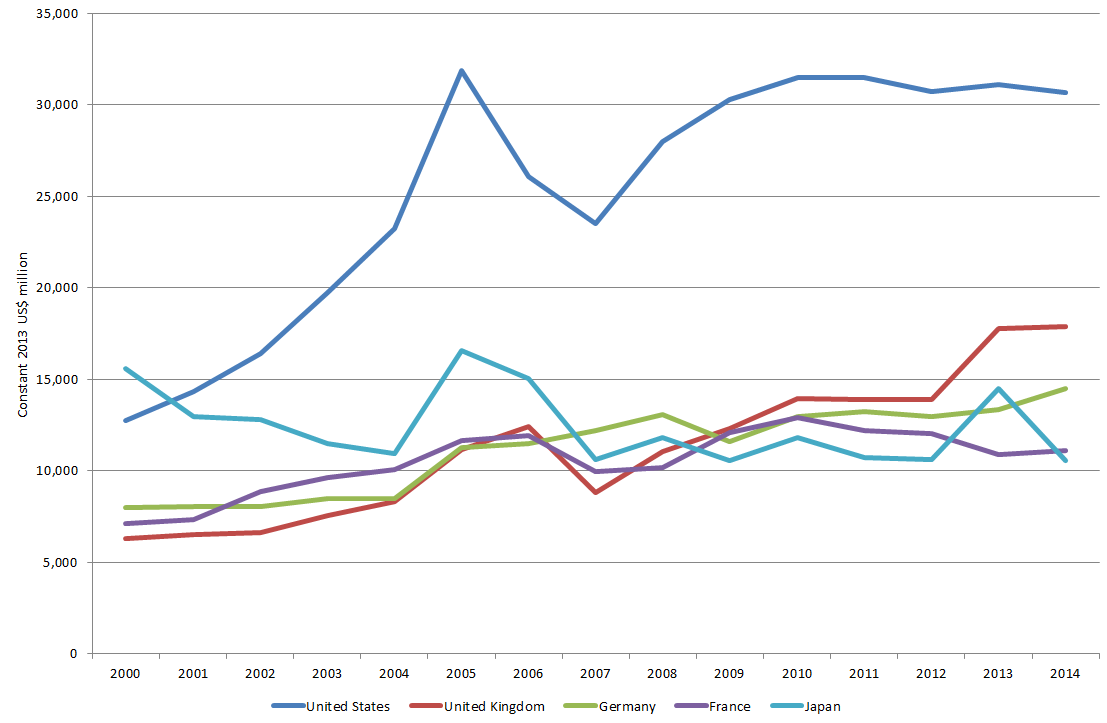 Despite some large-scale wobbles, aid from the donors in the US$10 billion club has exhibited either growth or stability over the long term. The outlook is, on the whole, one of continued stability. France might well drop a little further, given its slight downward slope over recent years. Japan will certainly not repeat its 2013 spike (a real increase of almost 37 per cent) anytime soon but, as noted in the most recent DAC peer review of Japan’s aid program, intends to hold its aid steady in US dollar terms. 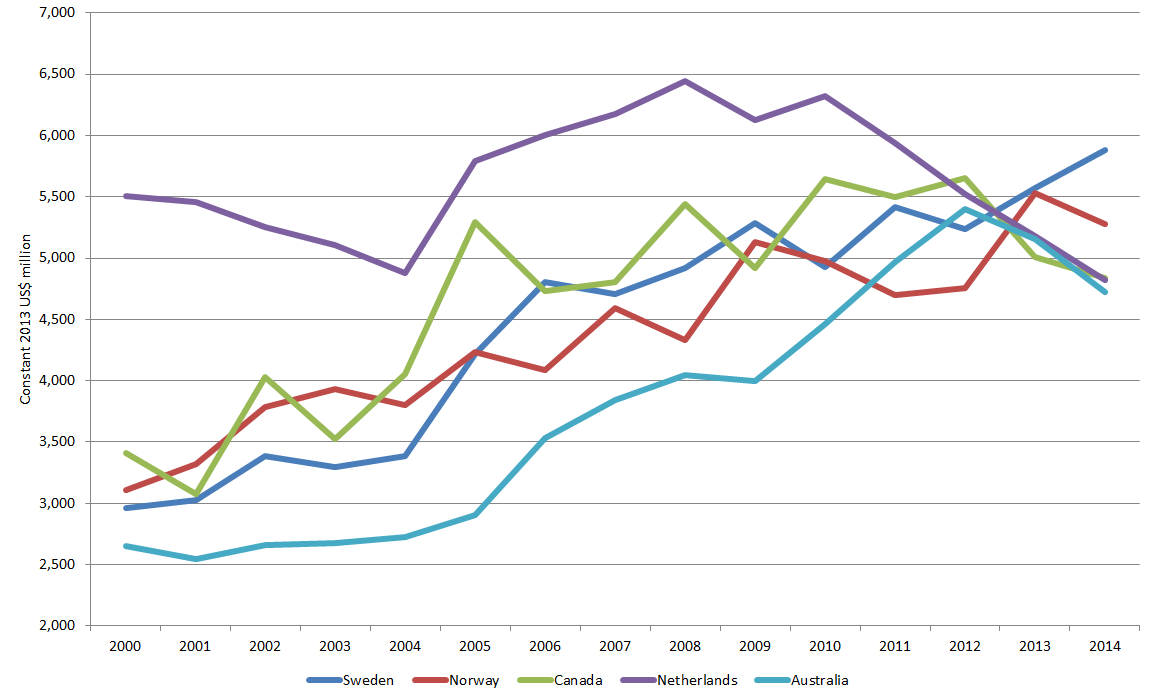 In the US$5 billion club we have two donors, Sweden and Norway, whose aid currently exceeds one per cent of GNI and oscillates around an upward-sloping trend line. We have another, the Netherlands, whose aid might well fall by almost 25 per cent between 2010 and 2014, but will then stabilise at its reduced level of around €3.8 billion—which, it should be noted, still constitutes about 0.59 per cent of GNI. And we have two donors, Canada and Australia, whose aid increased strongly for some years, peaked in 2012 and is now in decline. The dimensions of Australia’s decline are now known: it is quitting this club. It is much harder to know where Canadian aid volume is heading owing to a lack of aid budget transparency, and a seeming unconcern about actually spending amounts budgeted. 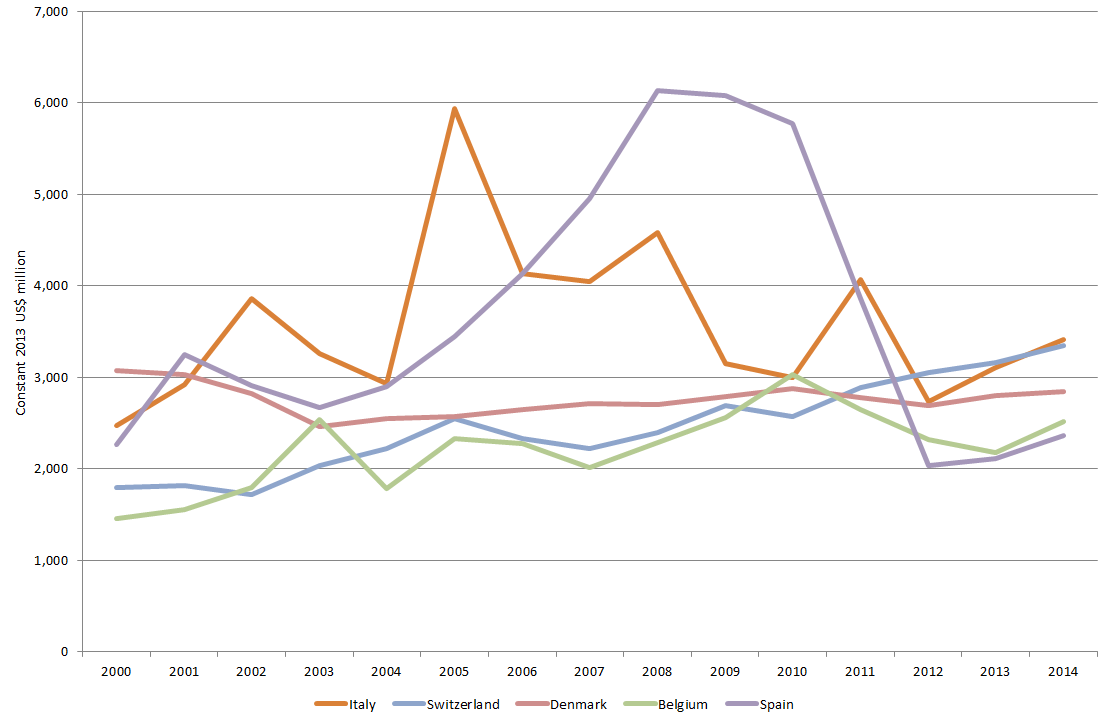 In the US$2.5 billion club we have two donors, Italy and Spain, who briefly graduated to the US$5 billion club, fell back with a thud and now seem to have stabilised their budgets. We also have Denmark and Switzerland, whose aid is stable or increasing, and Belgium, whose aid has been more volatile but now seems broadly stable.

What of aid from non-DAC sources? This, including not only official but also non-government sources, is very important at around the US$40 billion per annum mark. However, despite assumed growth in aid from China and India, the overall level of such aid might not be growing particularly strongly. In fact, based on information reported to and collected by the OECD (summarised in the particularly impressionistic chart below), non-DAC aid might have fallen a little in 2012, the most recent year for which any kind of data are available. This results mainly from a big fall in aid from Saudi Arabia (US$1.3 billion in 2012, down from US$5.1 billion in 2011). 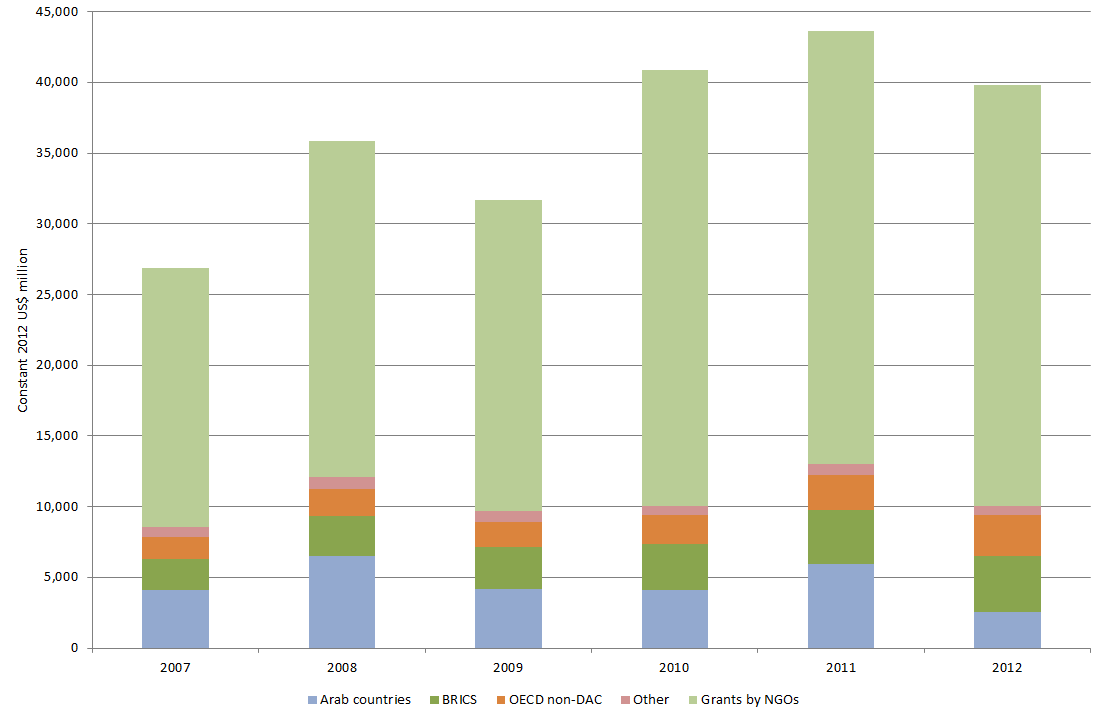 Intuitively, some ODA stability should be expected at this point. The United Kingdom’s big increase to 0.7 per cent of GNI, achieved in 2013, is now in the system. Those donors who have seen a need to cut in recent years have implemented their cuts and are looking to stabilise or rebuild their aid budgets, despite facing much greater economic challenges than Australia. And—though this is entirely speculative—there might actually be a tendency for donors to club, such that their aid generally converges with that of their perceived peers over the medium-term (see for example the remarkable convergence within the US$5 billion club in 2013). If so, this tendency would act as a force for stability.

In sum, Australia is the only major OECD donor whose aid volume is avowedly on a steep downward path at this time. Some of the top-five donors tend to be unpredictable, particularly Japan, but none has signalled an intent to cut. France is probably the most likely of these donors to decline, especially if it cannot maintain recent rates of soft lending, but it has no aid-reduction policy agenda. Canada’s aid might well be cut further in future years but we cannot be sure about that. Canada’s government gave confusing signals in its 2014 budget—cuts were earlier flagged but the aid budget was in fact held constant (or was at least asserted to have been). Depending on the shape of Canada’s next budget, Australia might have either one dive buddy, or none.

Robin Davies is the Associate Director of the Development Policy Centre. Adeline Clarke, an intern at the Centre, provided research assistance.