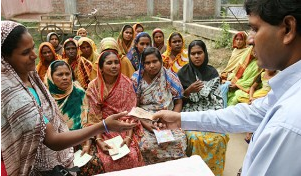 It’s easy to see the appeal of microfinance. The idea of loaning small amounts of money to individuals or families in developing countries to help them overcome credit constraints makes sense. I always thought it was a good one. The trouble is, in aid, ideas that seem good can still be misplaced. And this has increasingly appeared to be the case with microfinance.

Some initial studies suggested that it did considerable good, but then came David Roodman whose careful analysis (book, blog) showed that the reality of microfinance was more complicated than advocates (and some early research) had suggested. And post Roodman, the only sensible conclusion about microfinance appeared to be that, rather than pushing ahead with a lot more giving of this sort, we should focus on trying to learn if and when the approach worked.

In this vein the American Economic Journal has devoted its January issue to publishing six methodologically sophisticated studies of the impacts of microfinance. The individual studies are behind a paywall but the overview article by Abhijit Banerjee, Dean Karlan and Jonathan Zinman is available online here [pdf] (and a great vox pop summary is here [pdf]). The studies use gold standard methods (variants of Randomised Control Trials – RCTs) and cover six different countries. At the risk of oversimplifying (read the summary paper!) the two most important points for an aid practitioner are that the studies suggest microfinance typically does not offer recipients a pathway out of poverty, but that this is not because recipients squander the money or don’t try. It’s just that the constraints to development are elsewhere. To be clear, this isn’t an entirely negative finding. Even gold standard papers have limitations, as the authors note, and there is some evidence of modest benefits, as well as some suggestion that a minority of borrowers do benefit more significantly.

Nevertheless, the findings fit with the fact that most recent academic research has not been kind to microfinance. Which leads to another puzzle: despite this evidence you can still find numerous people in the world of development who believe that microfinance works. Why?

Conveniently, another recently published journal article offers two good explanations for the discrepancy, both which offer interesting methodological and practical insights. The paper in question, using data from Nepal, by Ram Rajbanshi, Meng Huang and Bruce Wydick, can be found in its final published form here (and in an ungated form here). The good news is that neither of the explanations it offers suggest that proponents of microfinance are dishonest. And, at the same time, the findings are fascinating.

The first explanation as to why proponents of microfinance claim there are benefits is that practitioners working in the field really do often see people’s lives getting better after they are given microcredit. The trouble is that the relationship practitioners observe is, for the most part, spurious and driven by the fact that borrowers are (quite sensibly) more likely to take up loans when external circumstances are favourable. And, ultimately, it’s these improving external circumstances that drive most of the subsequently observed improvements in welfare, not the loan itself.

The second explanation the paper provides is that many (but not all) of the RCTs previously conducted on microfinance have focused on areas where some microcredit has already been available prior to the study and its ‘treatment’ loans. The methodological problem here is that the types of people who could most benefit from microfinance have usually already managed to access loans from existing NGOs and/or private lenders by the time the RCT arrives to offer new loans to test the efficacy of lending. And, obviously, if the people most likely to benefit from microfinance already have it when a study starts, it is quite possible that RCT-type studies will under-report the benefits of microfinance as study participants will be drawn from a population whose potential to benefit is less.

Intriguingly, both of these explanations pull in opposite directions: the first highlights flaws in the simple before and after comparison approach, which has produced the sort of evidence often favoured by proponents of microfinance; the second suggests a weakness in RCT-type evidence, which has been less flattering to microfinance. Which finding matters more? Here’s how the authors summarise the magnitude of the two findings:

[W]e estimate that approximately 3/4 of the impact testified to by practitioners after taking microfinance appear to be something akin to an optical illusion, driven by correlated unobservables. But we also find that the approximately one-fourth of this “apparent impact” that remains is nontrivial [that is, the sort of benefit hidden from most RCTs].

The first explanation is, in other words, the most significant one. But the second effect is real too. Taken together the most recent research would seem to suggest not only that we need to be careful in believing what advocates have to say about microfinance, but also in leaping to conclusions that it has no benefits whatsoever. The real task from now on will, I think, be trying to determine when microfinance can help, and whether it is the most appropriate form of help in any given context.