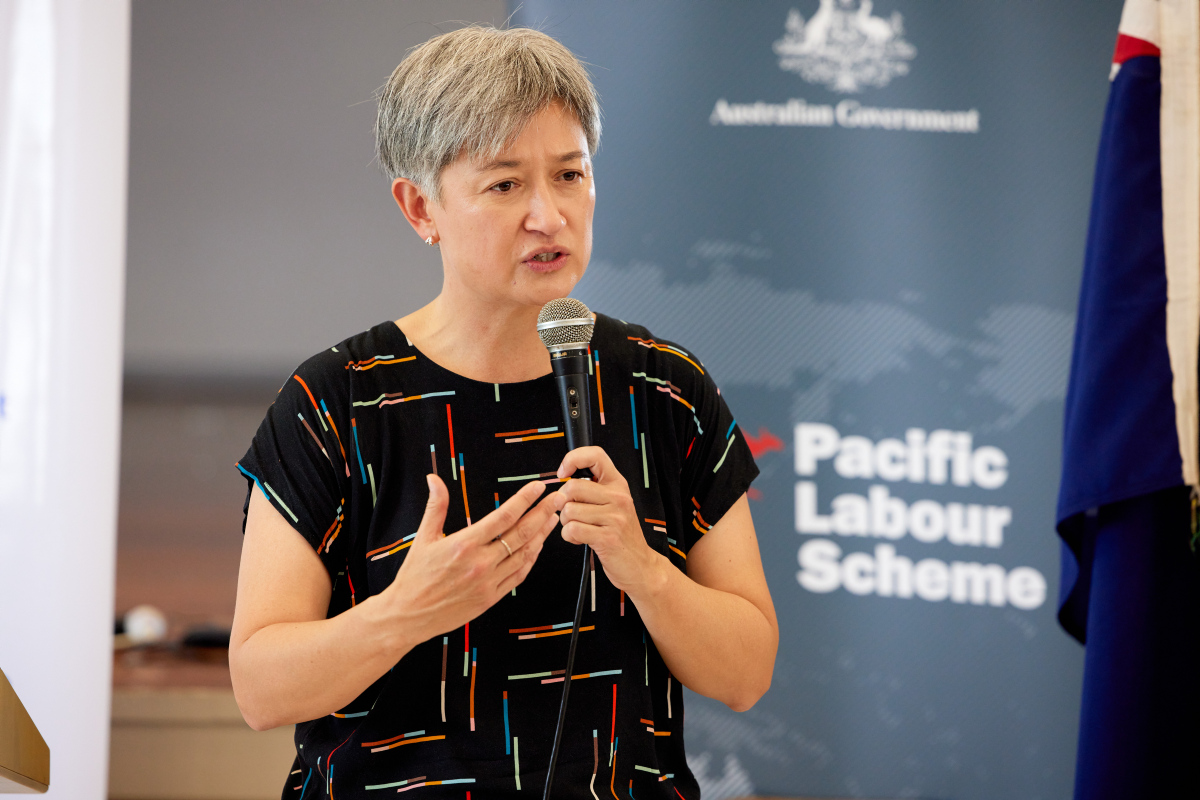 Minister for Foreign Affairs Penny Wong in Fiji, May 2022

Penny Wong covered some of these ideas in her keynote speech in Suva:

The many thousands of seasonal workers who contribute to our rural communities, support critical industries while gaining valuable skills. One of the most powerful examples of the depth of our bond is the way our Pacific brothers and sisters have come to Australia’s aid – during the Black Summer bushfires and more recently during our devastating floods. For generations, Pacific Islanders have been adding to and shaping Australian culture. We welcome the contribution people of Pacific heritage bring to Australia.

We want to look at ways we can continue to build upon those links. Australia will do more, and will do it differently. We will ensure that those Pacific Islanders who come to work in Australia are treated fairly – with better conditions. We will allow workers to bring their families. And we will create the Pacific Engagement Visa – to provide a pathway to permanency for 3,000 members of our Pacific family per year.

She gave more details in the Q&A that followed the keynote, explaining that the new policies were:

… developed in Opposition, in fact, in dialogue, unofficial dialogue, of course, with Pacific Island representatives. There is the shorter term visa, which I think is currently called the Seasonal Workers Programme, which would not have additional family rights. But then there is a longer visa, where we have said we would structure the visa so that people could bring their families. That was in response to, I suppose, not so much complaints, that it was very hard for people. Remittances are an important part of the economy. It’s a hard thing to be away from your family for that long, and not good for your family. We wanted to provide a longer term visa with family rights as well.

The third category is a completely new category which hasn’t been done before, and we’re quite excited about the prospect. That is 3,000 permanent visas per year for the region. So people can come to Australia under that arrangement and obtain permanent status in Australia. It was modelled on the New Zealand type of visa … We can talk a lot about people to people links, but we really need to also put in place the mechanisms to build that even more than we have and we think this is one of the ways in which that can be done.

In Fiji, Penny Wong met with a group of departing workers. She explained to them that the idea of allowing family accompaniment (commencing from January 2023) “came from the workers themselves”, and that the government “recognises the importance of bringing families”.

All the new government’s announcements so far have been in line with Labor’s pre-election commitments, which included family accompaniments on the multi-year Pacific Labour Scheme (not the multi-month Seasonal Worker Programme) from January 2023, and to have the Pacific Engagement Visa commence by July 2023. No mention has been made so far of the election campaign announcement that the government would help with the pre-funding of airfares, perhaps because it is too technical. There have been only more general mentions of Labor’s plans to crack down on worker exploitation, as a part of broader compliance activities.

These announcements have been very popular, with one article having received over 40,000 views. They were also welcomed by Tuvalu’s Foreign Affairs minister Simon Kofe on Twitter.

Despite the current fixation on China’s role in the region, as Andrew Tillett from the Australian Financial Review (AFR) remarked, “It is noteworthy that most of the questions Wong received from Samoan and Tongan journalists were about migration rather than China.”

Migration was a particularly popular topic in the Tonga press conference. Most of the questions asked in Tonga were about how Australia would make migration from Tonga to Australia easier. One question was about Tonga’s local workforce decreasing due to seasonal work, and the impacts of this on Tonga’s reconstruction efforts following the recent volcanic eruption.

Meanwhile, back at home, Australia’s new Minister for International Development and the Pacific, Pat Conroy, has told the AFR that migration and cultural ties are key to the new government’s approach:

If we are successful in making the Pacific labour schemes the primary source of temporary labour for rural and regional industries, that’s hundreds of millions of dollars of remittances every year for these nations, and that’s a lot more sustainable than overseas development assistance which is tied to budget cycles.

This is a real ground-breaking initiative, the Pacific Engagement Visa. It’s the first time that … the Australian Government will allocate a specific number of permanent migration visas for a region, and it’s a sign of our support and enthusiastic membership of the Pacific family, that we want to make it easier for Pacific Islanders to live in Australia, to be permanent migrants, and eventually become citizens. Because that diaspora is so important. And I, quite frankly, I think it’s a disgrace that in 2019 for example, there’s only 621 Pacific Islanders that became permanent migrants to Australia, which represented only half of one percent of the total permanent migration to Australia.

We’ve announced that every year there will be 3000 permanent migration spots allocated to the Pacific Islands. They will be done on a pro rata basis amongst the Pacific Island nations, so that we’ll generally give people from each nation an opportunity. Importantly, they’ll need to have a job offer in Australia, so that there is an economic opportunity for these countries …

This is a really important thing. People have said to me previously that they find it very hard to migrate to Australia compared to other nations around the world. I think it’s ridiculous given the fact that obviously PNG, for example, is our nearest neighbour, it’s only 3km away from Australia. There’s nine million Papua New Guineans but it’s very difficult for them to travel to Australia or even settle in this country. But we do need to be sensitive to the concerns of some Pacific Island nations around the implementation of this scheme, we need to make sure this a scheme that works to advance all nations in the Pacific, and builds on the economic sustainability of the entire region.

The reception to the Labor government’s new policies has been as positive at home as it has been abroad. As Greg Sheridan of The Australian recently wrote:

This is the right time for the Albanese government to think big and ambitious in its South Pacific policy.

Although it would need to be done with care, a substantial widening of the Pacific labour program would be good for Australia economically and a powerful glue with the region, producing cultural and strategic dividends.

Probably there are no circumstances more propitious for such an initiative than now. Who could oppose it?