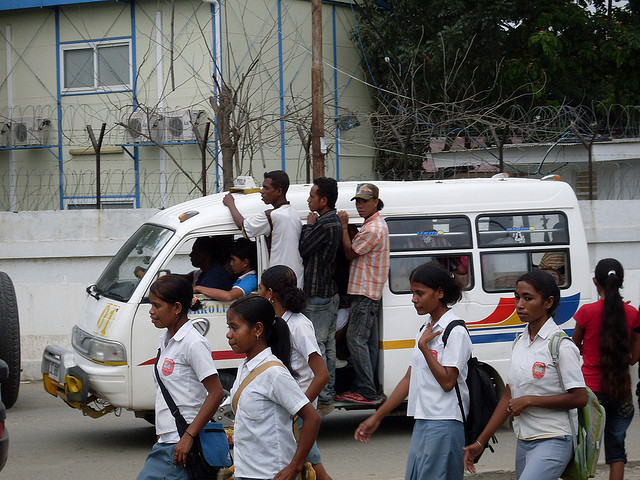 Not just a domestic problem: everyday discrimination against women in urban Timor-Leste

By Angie Bexley and Maj Nygaard-Christensen

In Timor-Leste, local and international development programs have renewed their focus to raise awareness about violence occurring in the domestic sphere. Meanwhile, violence against women in the public sphere is problematic as a field of intervention.

In the course of our research over the last decade, we have spoken to many young men and women about social and political change. An unexpected outcome of this research was the volume of data we would collect about women and violence. Women from a range of backgrounds voluntarily told us stories of their everyday experiences of harassment and intimidation: in the streets, in cars, in public transport, even at the office. To what extent does the tolerance of violence in the public sphere shape the experiences of violence against women inside the home? And what can be done about it?

Public forms of violence against women occurs alongside indications that the public’s tolerance for domestic violence is rising, despite a range of initiatives undertaken to counter violence against women, including various laws and policies adopted Timorese government to protect women. Last year’s UNDP Human Development Report indicates widespread acceptance of domestic violence in Timor-Leste, notably reporting that a larger proportion of women (86.2 per cent) than men (80.7 per cent) think there are circumstances in which a husband can be justified in beating his wife.

The impact of this thinking on the lives of Timorese women is demonstrated by the Timor-Leste Demographic and Health Survey (DHS) 2009-10, which shows that more than a third of married women – 38 per cent – have experienced violence since the age of 15. Young women between the ages of 25 and 29 are already more likely than other age groups to report having experienced physical violence during the past 12 months.

In addition to physical violence, younger women are also frequently at the receiving end of everyday instances of harassment, which often take place on public transportation and urban streets.

Common to young women’s narratives is the onus that falls upon them to avoid such public arenas where harassment could occur. Such strategies include leaving work early before dusk to go home, and catching public transport or a taxi with a friend, rarely alone.

But taxis are not the safest option either. Some report a rise in instances of taxi drivers offering free rides to young women in exchange for sexual favours. Many younger women we spoke to have experienced being harassed and intimidated by drivers. Other experiences narrated to us included male taxi drivers driving dangerously close to female pedestrians, and male motorcyclists kicking off female motorcyclists. The female narratives feature constant heckling from men of all ages while walking on streets.

Unlike cases of domestic violence, there is nowhere to report these experiences to, and few (if any) attempts to raise awareness about everyday experiences of harassment. Everyday condoning of discrimination against women is reinforced by misunderstandings in Timorese media and, sometimes, in civil society organisation (CSO) debates, where women’s rights and protection tend to be portrayed primarily as a responsibility of female members of government, rather than a shared responsibility for all.

While the women we have spoken to don’t believe harassment or violence is their fault, there is a common thread of thinking that women’s behaviour could influence the violence perpetrated against them. One (female) NGO provider of gender awareness training for instance, explained that offering cooking lessons to rural women might help reduce the violence perpetrated against them because, according to her, men might resort to violence if their wives can’t live up to what is considered to be their domestic responsibilities.

This underscores the need to continue the work of raising awareness about women’s rights but also the clear need to develop a better understanding of male attitudes and behaviours towards women. Nearly half of the women interviewed for the Timor-Leste DHS 2009-10 believed that ‘men cannot control their sexual behaviour’. Rather than pushing towards a culture of male accountability, public responses to crimes against women routinely portray the female victim as somehow complicit in the crime, for instance by dressing or acting inappropriately.

The trend of urban spaces as increasingly common settings for everyday discrimination and harassment of women goes against the common donor thinking that rural locations – through their associated link to traditions seen as stopping women’s progress – are more in need of intervention. A continued donor focus on violence in the domestic sphere is crucial. However, while not all women experience domestic violence, urban public spaces have become increasingly common settings for everyday harassment and intimidation for all women and girls.

As noted in a recent issue of Gender & Development, there is a need for a strengthened focus on everyday experiences of violence and harassment of women in urban environments, and to raise awareness about the ‘normal experience of violence and the fear of violence that affect the daily lives of women and girls everywhere’. In Timor-Leste, this includes understanding why violence and everyday harassment of women continue to rise, in spite of the establishment of legal frameworks that aim to secure the rights and protection of women and girls. A strengthened focus on the public culture surrounding women’s experiences of harassment, violence, and discrimination outside the home may go some way to help dismantle the public’s tolerance of violence inside the home.

Angie Bexley
Angie Bexley and Maj Nygaard-Christensen both hold PhDs in anthropology. Their consultancy team Seanthro, brings relevant and up to date Southeast Asian research and research debates into policy and practice. They are the editors of a forthcoming volume on ethnographic fieldwork in Timor-Leste and have published widely on Timorese politics and development

Maj Nygaard-Christensen
Angie Bexley and Maj Nygaard-Christensen both hold PhDs in anthropology. Their consultancy team Seanthro, brings relevant and up to date Southeast Asian research and research debates into policy and practice. They are the editors of a forthcoming volume on ethnographic fieldwork in Timor-Leste and have published widely on Timorese politics and development.