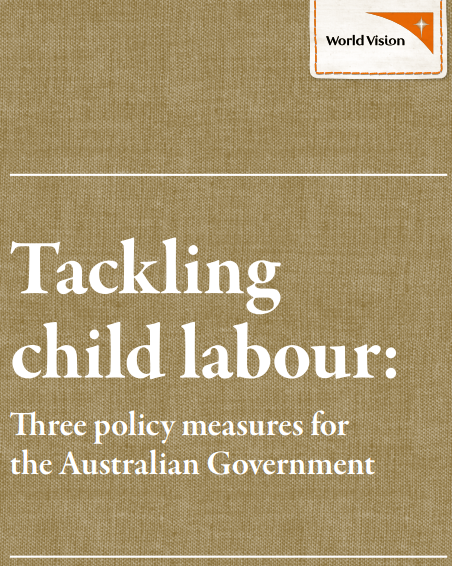 Not just another day… World Day Against Child Labour

By Hayley Channer and Ruth Dearnley

Today, Friday 12 June, is World Day Against Child Labour. It’s easy to see why these ‘days’ can be approached with a bit of cynicism. Some cynics may even say they’re just an excuse to sell a different coloured ribbon. But despite the large number of commemorative days and the merchandising that can be attached to them, this one shouldn’t be so easily dismissed.

A primary reason for World Day Against Child Labour is to bring attention to this cruel and inhumane practice and refocus governments and civil society to tackle the problem. While it’s easy to feel overwhelmed by the enormity of this problem, there are measures that can be taken to reduce this practice and the Australian government has been making some headway. But first, what’s the size of the problem and how is Australia involved?

There are 168 million child labourers in the world today. That is more than 10 per cent of the world’s children over five years old. Australia has greater proximity to this problem than you may think: the largest number of child labourers – approximately 78 million – can be found in our immediate neighbourhood of Asia and the Pacific. Of these, more than 33 million are engaged in hazardous work, which includes working in dangerous or unhealthy conditions that could result in the sickness, injury or even death of the child. Again, this figure of 33 million is the highest of any region in the world.

The International Labour Organization (ILO) describes countries in Asia and the Pacific as having a ‘high tolerance for child labour’ in many countries as well as ‘political volatility and conflict’ in others, factors which exacerbate the problem and hinder efforts to reduce the practice. While governments in the region have made considerable progress of late in reducing the number of child workers, child labour in agriculture, manufacturing, and the service and domestic sectors continues to be widespread. In two-thirds of countries in Asia and the Pacific children are engaged in farming, where they can be subject to long hours of work and poor working conditions, and exposed to harmful chemical or biological agents. In Southeast Asia specifically, a large number of children are employed as domestic servants.

In many cases the impact of premature labour on children is severe: children can suffer negative health and developmental consequences and be forced to leave school early. At the macro level, child labour results in increased adult unemployment and lower wages, reduced direct foreign investment and slowing technological progress in the workplace. In this sense, child labour contributes to the poverty cycle in many countries and puts Australia’s goal of changing aid recipient countries into trade partners further out of reach.

The Australian Government has recently taken some initial steps to address child labour. In response to a Senate vote, in September last year the Minister for Employment, Eric Abetz, raised the issue of child labour at the G20 Labour and Employment Ministers’ meeting. As a result, the G20 Ministers declared their strong stand against child labour and prioritised measures to eliminate child labour. In addition, a high-level Employment Working Group was established to pursue the creation of quality jobs. While these are important steps, in comparison to the problem they are small steps, and more concrete action is the only thing that will accelerate the elimination of child labour.

Specifically the report recommends that the Australian Government:

There is no silver bullet with which to eliminate child labour. National action plans, public procurement rules and corporate law reform will not solve the problem on their own, nor do these represent the only actions that the Australian Government might take against child labour.

However, these recommendations do provide opportunities for the Australian Government to help reduce the global market that accepts child labour as inevitable, and strike a meaningful blow against those who would profit from the suffering of children. Perhaps just as importantly, they provide clear, concrete and relatively simple ways for the government to send a message to businesses, consumers and governments around the world that Australia takes a real stand against forced and child labour.

As one of the world’s leading economies, one of the most meaningful contributions that Australia can make to tackling child labour is to help reduce the global market for goods produced through the economic exploitation of children. Contributing to global efforts to eliminate child labour not only meets Australia’s moral and international legal obligations, it’s also in our long-term national interest. As the global economy becomes ever more interconnected and interdependent, Australia simply cannot afford to stand by while more than 10 per cent of the world’s children work in conditions that are detrimental to their health, future productivity and their own countries’ prosperity and development.