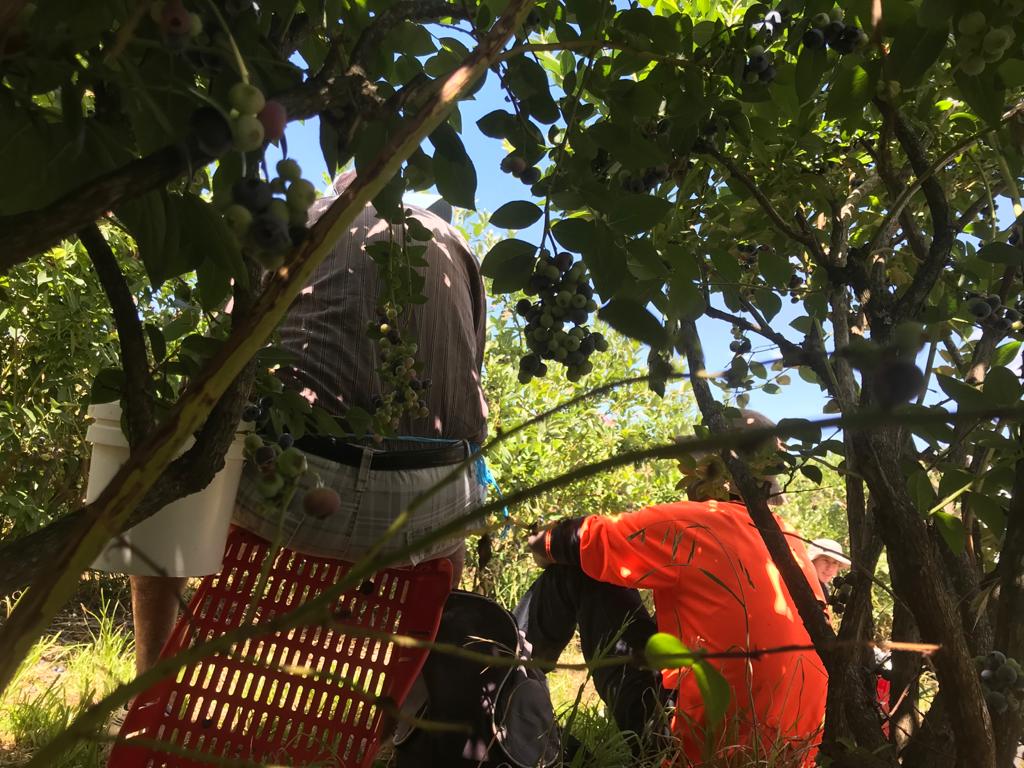 One day in the life of a fruit picker

When I went fruit picking in January, I had already been writing about horticultural labour for more than a year, and it was strange to so suddenly be actually engaged in it. Many little aspects of the work, it turned out, just weren’t visible from afar. Others, the situation with piece rates for example, I didn’t understand as well as I thought. In this blog, and the next, I describe some of these impressions of harvest life, and consider the issues that they raised.

The work itself got off to a slow start. Three hours into the second day of picking it started to rain. Even at seven when we had started, there were flickers of lightning on the tree line, but it was ten before the first drops fell. There was a perceptible pause in the rustling as Charlie Team looked up at the sky. We wouldn’t be earning much today.

A few rows over a voice with an Afghan accent called out, “it’s OK, picking online today”. The droplets were quickly becoming a downpour. Laughs from the foliage. From much further away the supervisor was calling something out urgently. I listened.

“Cover the fruit! Bring it in.”

The supervisor hailed from regional Western Australia and had a backstory about being deputy regional manager of a failed clothes shop. Unlike us she was paid by the hour and, we guessed, got a bonus if we did a thorough job. Her constant admonishments to “pick clean” won her few friends and the ire of my sometime picking partner, a Turk for whom his COVID extended working ‘holiday’ was also a way of not living under the thumb of pious neo-fascists that frowned on his sardonic and outspoken atheism.

“Cover the fruit. Clean that tree,” he mimicked in a nasal falsetto, eliciting another round of guffaws from anyone in earshot, all of whom had started ripping berries (along with unripe fruit, and twigs, and leaves) off the branches. For the last delivery of the day the quality control was always looser so we could get away with picking rubbish. Piece work – everyone for themselves.

The orchard was a 45-minute bus ride out of town. In other places pickers are charged for transport, but this company did things at scale and had nothing to gain by making 400 food handlers disgruntled. Days began at dawn in the footy club car park. Sleepy people waiting silently in the cold, kitted out in op-shop hi-vis and clutching sandwiches in supermarket bags.

We were organised into seven teams via Facebook: Alpha all the way through to Golf. Each boarded in turn, getting temperature checks as they did. It felt less than perfunctory. Between the full bus and common facilities if one of us got COVID we all would, but it was either accept that or not get paid. Sydney was in lockdown. We still shook hands.

Each team worked from a trailer known as a chariot, laden with trays, buckets and an electronic scale. Pickers would literally tie on a bucket, grab some trays, fill them, and cart them back. The whole time I was there we were paid $3.70 a kilo, except once when fruit was particularly sparse, and it went up to $4.10. Everyone was issued an end-of-day docket with their total.

Blueberries, I discovered, grow on something taller than a shrub but not quite a tree. Legally the rate must be set at a level that a ‘competent’ picker should be able to make at least 15% more than the minimum hourly rate, which is $24.80. Most people picked 80 or 90 kilograms. The system worked, although in a slightly perverse way, as those incapable of picking well had little incentive to turn up.

When there were plenty of berries to go around everyone spent the day happily filling up buckets as quickly as they could. When there was less things got tense; it didn’t take a PhD in game theory to realise that the most lucrative strategy was to quickly strip the easy fruit and leave the slow work of getting the berries from the bottom or the top for someone less sneaky.

The supervisors tasked with policing this did it tough. Our invigilator spent all day going around urging people to go back and pick the berries they had missed, only for people to get on with business as usual as soon as her back was turned. I felt for her, but the pickers’ strategies seemed fair enough. If the company wanted a thorough job, they could damn well pay for it.

The long days ticked by to the crack of bird rockets, the rustle of berry hunters at work under a huge sky, and music and words in half a dozen languages.

“Break time”, someone would repeat, nearer, and you would hear it echo down the line.

Eventually, some people would work right through lunch if not directly told to stop, the team would emerge from the bushes and kip in whatever shade they could find. Fifteen minutes in the morning, half an hour in the late afternoon and then the home stretch.

Sitting around the packing shed waiting for the bus home people would wearily compare dockets, but once on board they quickly passed out. Dusty forest roads and pine plantations flew past the window. We had worked through the heat of the day and now the shadows were starting to lengthen.

In front of me the jester from Afghanistan, a nineteen year old in a berry stained Manchester United jersey, had nodded off on the shoulder of someone from South Sudan who patiently let him be and gazed out the window. By the time we pulled up at the caravan park I too was fast asleep.

This is the second in a series of five blogs on migration and agriculture in Australia reflecting on my experiences as a fruit picker earlier in the year. You can find all five blogs at #fruit picking series.