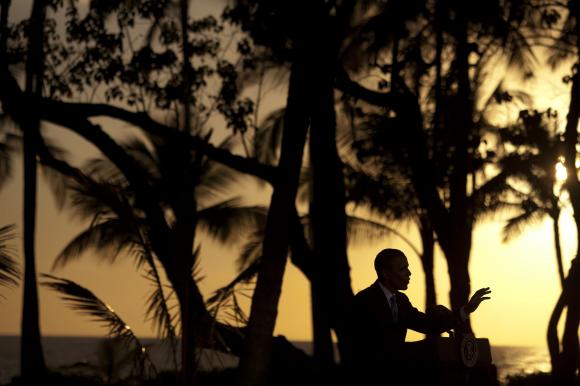 The Pacific and the Asia-Pacific century?

After cancelling two previous trips to Australia, US President Barack Obama finally touched down in Canberra and addressed the Australian Parliament, outlining his vision for a stronger US military presence in the Pacific. The visit hailed the 60th anniversary of the Australia-US alliance, and was marked by an agreement by Australia to host a full US marine task force in Darwin. The president’s message was clear: global power is shifting to Asia-Pacific, and the the US intends on being a major Pacific power.

Obama came to Australia after the APEC summit in Hawaii, where he spoke up the proposed trans-Pacific free trade zone. His agenda focused on job creation at home, while calling on China to ‘play by the rules’ on trade. APEC countries account for about 44% of global trade and make up some 40% of the world’s population. But not everyone sees the proposed Trans-Pacific Partnership (TPP) as a good thing for the Pacific, with some NGOs warning that there may be hidden dangers behind such a deal.

The expanded US military presence and the TPP, which is to include Japan, have unsettled China’s leadership. Chinese state controlled media  warned against Asia-Pacific economies being tied to the Americans and asserted outside forces should not interfere in Asian security issues, such as contested claims in the South China sea. The US and many ASEAN allies are concerned about keeping maritime sea lanes open, since something like 40% of global trade passes through the Straits of Malacca and the South China sea. Indonesia has also sought assurances from the US and Australia that the proposed US military base in Darwin is not directed at Indonesia.

The final stop of the president’s tour of this part of the world was the East Asia Summit in Bali, where the discussions on an enhanced US role in the region and maritime security continued.

The Pacific is not immune from these developments. Also last week, the US military tested a hypersonic missile that can travel five times the speed of sound – reaching any point on earth in under an hour. The Advanced Hypersonic Weapon was launched from Hawaii to the US test site in Kwajalein Atoll, Marshall Islands.

However, despite regional leaders calling this the ‘Pacific Century’, Pacific island leaders themselves have generally been absent from these fora and deafeningly silent as summits in Hawaii, Australia and Bali shape the Pacific region ahead.

Meanwhile, a network of academics and policy practitioners came together in Suva for an Asian Development Bank Institute (ADBI), ADB and World Bank workshop to brainstorm a locally-driven research project that would analyse long-term policy issues in the region. In this blog post, PiPP Chairman Nikunj Soni comments on a couple of pieces of interesting research presented at the meeting.

The new prime minister faced the immediate motion of no confidence by the opposition leader, Dr Derek Sikua, as protestors demanded the PM step down. Lilo has indicated that his ‘leadership will be based on a holistic approach‘ and will continue much of the legislative agenda established by his predecessor.

Speaking to Radio Australia, Jon Fraenkel, senior research fellow at  the state, society and governance program at the Australian National University, suggested the recent political changes and violent outbreak poses questions for the long-term stability of the country and the role of RAMSI. After eight years and more than AUD $1 billion, there is currently no timetable for a RAMSI exit from the Solomons, with the mission seemingly set to remain indefinitely.

Three presidents in a week. Nauru’s lawmakers have thrown the country into a leadership crisis following the resignation of Marcus Stephen amid allegations of corruption. After only six days in office, Freddie Pitcher, who succeeded Stephen, was also ousted. President Sprent Dabwido is now in the driver’s seat and has indicated his intention to improve governance on the island. Dabwido also remains open to talks to re-establish off-shore processing of asylum seekers for Australia. However, he believes people sent to the island for processing should not be incarcerated.

The dust has yet to settle in PNG after the Lae riots with nine confirmed deaths. Following the unrest, the Morobe provincial governor blamed the national government for neglecting security in urban areas. Many in the blogging community have been exasperated at the poor response of national and provincial leaders, lamenting the insignificance of the liquor ban put in place by Governor Wenge.

PNG has gone through its own political crisis in the past few weeks with tension caused by the suspension of the country’s top judge and an ensuing struggle between the Executive and Judiciary. Though labeled a controversial move, the judiciary responded with arrest warrants for the Deputy PM Beldon Namah and the Attorney General in a face off with the government administration. The upcoming court case by deposed PM Sir Michael Somare will likely add to the tensions in the country.

The coming weeks will be important with the budget expected to be handed down on November 29, and the court ruling on December 9.

Despite the political crisis, aid is still coming into the country to help build future leaders for PNG.

As the Arab Spring continues to unfold, a similar momentum for change continues to build in West Papua, as the giant Freeport mine remains shut after two months and demonstrations continue around the province. Thousands of protestors have rallied together and taken to the streets of Jayapura and other towns demanding a referendum on independence from Indonesia. It is also now 10 years since the law on special autonomy for the region was passed, which was supposed to deliver economic development and better governance for Papuans. The failure of this policy has only further fuelled resentment of the Jakarta government — this is compounded by ongoing poverty and problems with food security.

After the gathering of MSG Foreign Ministers in Port Vila, the Director General Peter Forau confirmed that West Papua will be given the opportunity to apply for observer status. Indonesia was granted observer status earlier this year.

During the ASEAN meeting, calls were made by human rights groups for countries such as the United States and Australia to do more in the fight against the abuse of human rights in West Papua. Access to information is difficult as West Papua was seen as the most serious media black spot in the Pacific, followed by Fiji and Vanuatu.

Activists warn that rolling demonstrations will continue, particularly as December 1 is remembered by West Papuans as the day they should have been granted independence over 40 years ago.

The Solomon Islands have been named [pdf] as one of twelve economies that have improved the most over 2010/11 in ease of doing business rankings published by the Asian Development Bank. One of the key developments in the Solomons has been the introduction of an online business registration system, which has cut the time for registering a new business from months to days. The new systems have also increased access to corporate information for shareholders.

This project is one example of the ADB’s ongoing reforms to enhance access to financial services in the Pacific and to encourage private sector development in the region.